The government and Treasury of the Falkland Islands have issued (11th July) a new crown coin which remembers the 35th anniversary of the day the islands were officially and wholly liberated from invading forces of the Argentinian Army. The long-running dispute between Britain and Argentina over the ownership of the Falkland Islands was brought to a head on the 19th March 1982, when 50 Argentinians landed on South Georgia Island and hoisted their flag. Under the order of Leopoldo Galtieri, president of Argentina and head of the military junta in charge, the invasion of the Falkland Islands was declared on 2nd April, triggering the start of the war. The island’s representative of the Crown and commander in chief, Sir Rex Hunt, was forced to beat a hasty retreat away from Stanley, the administrative capital of the Falklands and surrounding islands. Before being forced to leave the island by the invading forces, Sir Rex put on his full ceremonial uniform, complete with plumed hat, and marched off to meet the enemy at Stanley town hall, where he warned them with these words:

You have landed unlawfully on British territory and I order you to remove yourself and your troops forthwith.

Sir Rex was removed from the islands by Argentinian forces and flew home to the United Kingdom from the Uruguayan capital of Montevideo. The British government, then led by Margaret Thatcher, responded to this attack by sending a large task force to recapture the islands. This force included a member of the British royal family, Prince Andrew, who personally fought in the battle. The campaign launched by Margaret Thatcher—which probably initiated her nickname of the “Iron Lady”—was one of the most memorable events in post–World War II British history. The British forces operated 8,000 miles from home and in terrible conditions. Almost 1,000 people lost their lives during the 74-day conflict, but the war was brought to an end on 14th June with the surrender of Argentina and the announcement of Britain as the victor. Sir Rex—knighted in October 1982—returned to the South Atlantic after the British military’s June victory. In 1985, the final year of his posting, a new Falklands constitution reinstated and consolidated the position of governor. He retired from his post altogether that same year. 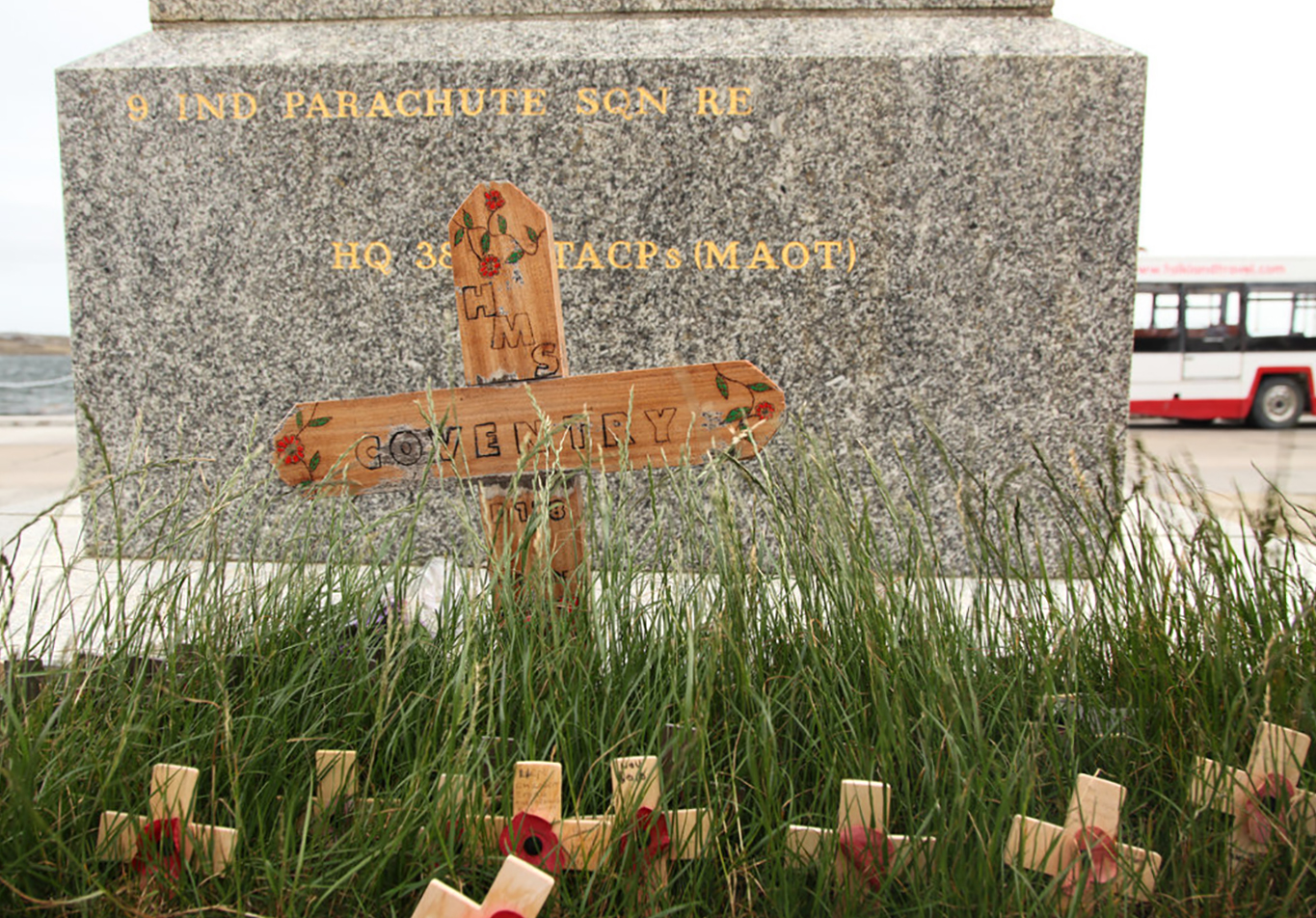 Crosses at the base of the Falkland Islands Memorial (hover to zoom). (Photo by Liam Quinn)

Many veterans and next of kin of those who paid the ultimate price for liberating the islands have visited over the past 35 years. The Falklands Liberation Memorial, a beautiful tribute to our lost soldiers, was erected on the Falkland Islands at the junction of Ross Road and Reservoir Road in Stanley. The monument was funded entirely by Falkland Islanders and was even designed by a Falklands-born architect, Gerald Dixon. The bronze figure of Britannia was sculpted by David Norris and was unveiled on Liberation Day 1984. The coin is produced by the Pobjoy Mint, United Kingdom, on behalf of the Falkland Islands government and treasury. The reverse side features three soldiers facing away from the monument with their heads bowed and both hands placed on top of a sword in a formation also known as the Prince’s Vigil. In the centre is the Falklands Liberation monument crowned with the bronze statue of Britannia. Below is the denomination, ONE CROWN. Each 1-crown Liberation of the Falklands sterling silver coin is encased in an acrylic capsule for protection and housed in a custom red presentation box with a certificate of authenticity; each cupro-nickel coin is shipped in a branded blue Pobjoy Mint pouch. Please visit the website of the Pobjoy Mint for additional information on these and other coins issued by the government and treasury of the Falkland Islands.   ❑