In an effort to alert the public of a potential fraudulent coin being offered to the numismatic community, the office of the Premier of the British Virgin Islands has issued a communique to advise would-be collectors that a coin which has recently surfaced purporting to be a crown coin from their authority is in fact not an authorized coin from their Treasury. The theme of the coin is the recent Papal visit of Pope Francis to Brazil which took place in July 2013. An image of the Pope appears on the reverse of the coin, with an effigy of HM Queen Elizabeth II and the “2014” date on the obverse. 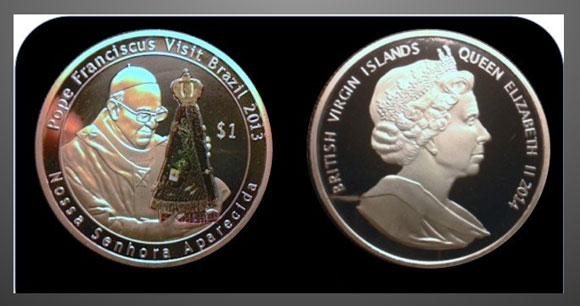 The following text was included in the press release by the Premier’s office:

This ‘coin’ allegedly commemorates the visit of Pope Francis to Brazil and bears an image of Her Majesty the Queen on the front, together with the wording ‘British Virgin Islands.’

All interested parties are advised that this ‘coin’ has never been approved by the Government, the Foreign and Commonwealth Office or Her Majesty the Queen.

Immediate action is being taken to investigate the perpetrators of this distribution. In the meantime, the Government of British Virgin Islands is alerting any potential purchasers that this item is not an authorized coin.

We would like to hear from anyone who has purchased this coin, please leave your comments on this page and share with our readers how you found this coin or were advised where the coin was available, including its cost.