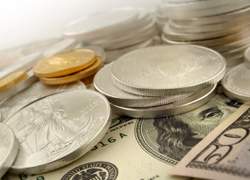 For silver to drop about 9% and gold about 4% within 48 hours is a significant decline.  In the past few years, whenever there were quick large declines in precious metals prices, they have been invariably followed within days by a horrible financial surprise.

There are a number of other financial developments that are also sending off alarms.

Federal Reserve Chair Ben Bernanke appeared on the 60 Minutes television program over this past weekend.  During this interview, he revealed that the Fed may inflate the US money supply (disguised by using the term “quantitative easing”) by June 2011 by much more than the $600 billion announced on November 3.  In effect, Bernanke announced that the Fed might destroy the value of the US dollar by more than previous promised.

This news was bound the spook investors who own US Treasury debt, US dollar-denominated bonds, and US stocks.  I’m sure it was a major contributing factor to strong gold and silver prices at the beginning of this week.

This bad news was compounded by the announcement by President Obama that a tentative compromise deal had been reached to avoid the nation’s largest tax increase next month and to further hinder job creation efforts by extending unemployment benefits.  The increase in government expenditures and possible further declines in tax collections point to an even higher federal budget deficit.  In turn, this could spark higher consumer prices.  According to Howard Simons, strategist at Bianco Research in Chicago, “This tax agreement is a disaster for the US fiscal situation.”

Of course, if the owners of US Treasury debt expect the value of the US dollar to fall, that means that they would want to receive a higher interest rate to hold the debt.  The 10-year Treasury Note carried an interest rate at 2.939% at the close on December 6.  By December 8, the 10-year rate had jumped 13.6% to 3.34%!  Some analysts think that the Fed had to be the major buyer of 10-year Treasury debt sold on December 8 simply to restrain the increase in the interest rate.

The two-day drop in US Treasury debt values was the greatest since September 2008, in the week when Lehman Brothers went bankrupt, the US government bailed out insurer AIG, and Merrill Lynch was sold to Bank of America.

The US stock market gave signs that it was ready for a major decline, but it looks almost certain that the President’s Working Group on Financial Markets (also known as the Plunge Protection Team) was very active at manipulating stock prices to keep them from collapsing.

Compounding the bad news, the German Bundesbank attempted to auction 5 billion euros worth of 2-year 1% Schatz notes.  The auction failed, with the Bundesbank retaining 995 million euros of notes for which there were no bidders at any price.

Jim Rogers, the chairman of Rogers Holdings who became famous working with billionaire George Soros to break the Bank of England on September 16, 1992, spoke at the Reuters Investment Outlook Summit in New York on December 7.  In his presentation, he called US government inflation statistics “a sham” that is leading the Federal Reserve to understate price pressures in the economy.  He also declared, “I expect interest rates in the US to go much, much, much higher over the next few years.”

In discussing the European Union debt crises and bailouts, he said, “I don’t expect the euro to be around within 10 to 15 years because they keep doing things like this and destroying the value of the euro.”  About troubled US banks and the rise in public debt, he feared, “We are going to have another lost decade or two.”

With all this bad news for the value of the US dollar and dollar-denominated paper assets, the US government had a huge urgent incentive to suppress gold and silver prices to discourage investors from aggressively moving from paper assets to precious metals.  Preliminary COMEX trading data shows this is almost certainly what happened.  If a lot of holders of long positions of COMEX gold and silver contracts were getting out of the market, the amount of open contracts would normally contract.  Instead the open interest in both the COMEX gold and silver markets increased.  There were almost certainly some long positions that were closed, but it seems obvious that there were more than an offsetting number of short contracts sold onto the market to hold down prices, which resulted in the growth in the quantity of open contracts.

As volatile as gold and silver markets have been so far this week, be prepared for even greater price swings in the near future.  When the really bad financial surprise hits the market, gold and silver prices will almost certainly start to take off.  The safest route to take advantage of the temporary price dip is to buy physical metals without using any leverage.  You don’t want to risk being closed out when margin requirements are increased, as happened twice in November.  And you don’t want to risk losing all of your investment when the counterparty on a paper contract defaults.