The organizers of the EXPO 2015 Milano were presented with a limited edition “super-sized” souvenir coin from the director of the United Future World Currency (UFWC), the official coins & medals of the upcoming European mega-exhibition which is expected to receive more than 20 million visitors during the six month event. 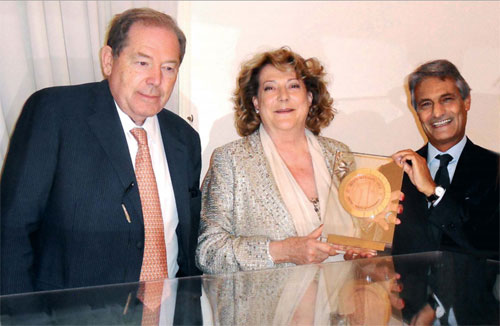 The coin, produced from pure copper and surrounded with a ring of palladium plated brass is a faithful replica of the coins which will be used during the EXPO as the coins have been designated as legal tender for the duration of the Exposition. Presenting the coin was Dr. Sandro Sassoli, Director of the UFWC to the organizers, Mrs. Diana Bracco, who is president of the Expo 2015 committee, and Mr. Cesare Vaciago, director of the Italian Pavillion for the EXPO 2015. 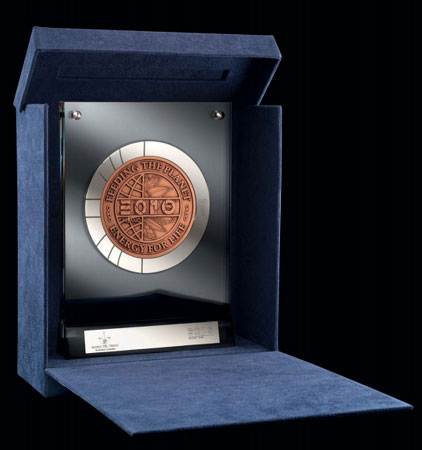 “Super-sized” EXPO 2015 Milano coin shown in perspex frame and presentation case. A nickel nameplate is included on the frame for personalization.

The coin presentation was part of the launch ceremonies organized by the EXPO 2015 organizers to highlight the upcoming one year count-down which will commence during the spring of 2014. The launch was also to promote the EXPO coins as well, electronic “coin-cards” are being produced which will enable the holder to use the coin to gain access to specially arranged events and displays as well as additional attractions in the EXPO grounds. The UFWC coins are the EXPO’s only officially licensed numismatic program. 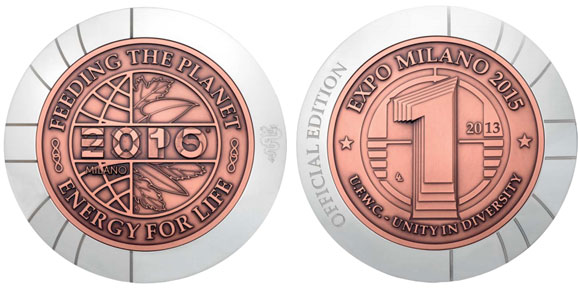 The “super-sized” coin is dated “2013” and is custom produced by Picchiani & Barlacchi, of Florence, Italy. It is designed by artist Luc Luycx – the chief designer of the Royal Belgian Mint and designer of the common reverse sides of the EURO coins as well as Mrs. Laura Cretara, the former artistic head of the Italian State Mint, and the first woman world-wide to occupy such a position  is the designer of the obverse side of the EXPO coins. The obverse design includes a rendition of the United Future world currency’s own earlier “tree of life” design. This version was specially re-designed to incorporate the EXPO 2015 logo and motto of “FEEDING THE PLANET – ENERGY FOR LIFE”. The reverse design, includes the numeral “1” five times representing the five inhabited continents. The initials of LL can be seen just to the left of the numeral.

The limited edition coin, individually numbered and available to interested collectors is encased in a custom perspex frame housed in a deluxe presentation box.  Only 2,015 pieces will be produced and any remaining coins not sold up to the opening day of the EXPO will be offered at the Italian pavilion – the EXPO officially opens on the 1st May 2015.

For more information on this exclusive item and for the EXPO 2015 Milano “coin-card” for use at the EXPO, please visit http://www.museodeltempo.org/