Offered as lot 6006 in Heritage’s FUN auction was a complete 16 piece aluminum proof set of all denominations struck for circulation in 1868. Such off-metal strikes, on an individual basis, are very scarce and infrequently encountered at auction and in private collections. A complete aluminum set is a major rarity and a once in a lifetime opportunity for the serious pattern collector. Besides the already remarkable fact that this set appeared to have been intact since 1868, it also includes the original wooden box of issue, one of only two such sets in private hands. The set was offered as part of the “Douglas Collection” and sold for $211,500 including buyer’s premium.

Off-metal coins (that is, those struck in a different metal than used for circulation) have been produced for quite some time, initially as test pieces prior to striking regular coinage. Many later pieces were produced for the sole intent of being sold to collectors of the time. Often these included gold and silver coins struck in copper, with some other metals occasionally encountered as well. Coins struck in aluminum are known as well, but need a somewhat different introduction. Throughout most of the 19th century aluminum was considered to be a semi-precious metal, valued closely to the value of silver. Because of the expense, all aluminum coins from the 19th century were struck to be either sold to collectors (who would have had to specifically request them) or to be given away to (foreign) dignitaries. The latter was the case with the 1868 aluminum sets. 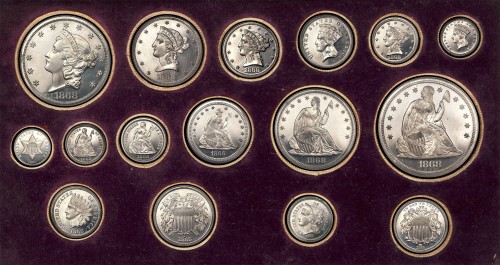 Struck at the specific request of Mint Director Linderman, a total of four boxed sets were said to have been requested and produced, two of which were reportedly meant to be sent to Europe; one to the Bank of England; and the other to the government of France. Whether these sets were ever sent remains to be disputed; none have ever turned up in Europe. One set was reportedly confiscated by the US Government and melted in 1887 after it was sold at auction; another set went to the Secretary of the US Treasury in 1868 and is now in the Eric P. Newman Educational Foundation and Museum. Two sets are presently in private hands; one of which sold in 2007 and is currently in a Midwestern collection; and the set offered by Heritage. This means that if the sets were ever sent to Europe more than four sets would have to have been produced.

While individual coins dated 1868 struck in aluminum are encountered once in awhile, auction records from 1870 on show that all complete sets can clearly be identified as one of those described above. The most plausible explanation would be that four complete sets were produced in addition to a small number of extra pieces of each denomination. As the auction description in the catalog notes, some collectors have tried to build a complete set “from scratch”. Needless to say, because of the rarity of these pieces, very few have succeeded.

The coins in the Heritage set have all been certified by NGC (despite an illustrative image in the auction showing the coins in the original box, they are all individually encapsulated) and range in numerical grade from PF-63 to PF-67 with various degrees of cameo contrast visible. Several pieces have been given the “star” designation by NGC, indicating exceptional eye-appeal. The set was first offered for sale in an 1882 auction. It eventually became part of the Garrett collection, sold in 1979 by Bowers and Ruddy. It was last sold in 1989 when it was part of the Jascha Heifetz Collection and has been off the market since. Without a doubt this was a tremendous and rare opportunity for the pattern specialist. With the other set off the market as well this might have been the last opportunity to buy such a set for at least several decades.