The Royal Mint have announced (14th November) that two new coins will be issued in conjunction with the 2012 Olympiad to be staged in London from July of 2012. These two coins, one for the Olympic Games and one for the Paralympics are issued in addition to the current “Countdown” crown series. They were designed by members of the public and selected following a Royal Mint competition for art and design students attending higher education colleges and universities across the UK. Students were challenged to create a design celebrating the capital’s role as host city of London 2012, including the Olympic and Paralympic Games logos. Designs were requested that could be symbolic or literal and could involve the use of emblems or lettering. 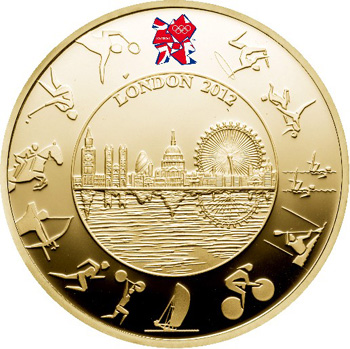 London 2012 Olympics: Designed by 24-year-old architectural student Saiman Miah, The inspiration for his design came from his love of architecture and includes a detailed impression of London’s iconic skyline.  Saiman also incorporates pictograms of athletes around the edge of the skyline to create a clock face referencing to another London icon, Big Ben. The official London 2012 Olympics logo, which is given a “Union Jack” colorized look (precious metal strikes only), is positioned at the top of the primary design. 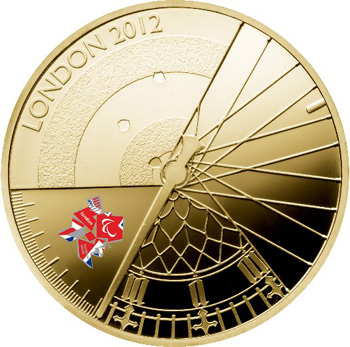 London 2012 Paralympics: Designed by graphic and media design graduate Pippa Sanderson, who cleverly intertwines the elements of five circular objects or those associated with circles, that of a spiked wheel, the portion of an archery board, the familiar face of Big Ben, a stopwatch, and a minute hand of a watch. Pippa’s design celebrates accuracy, maneuverability and speed by using the round shape of the coin along with circles split into these four sections. The official London 2012 Paralympics logo, which is given a “Union Jack” colorized look (precious metal strikes only), is positioned towards the lower left of the primary design.

The obverse of both coins includes the iconic effigy of Her Majesty Queen Elizabeth II which was sculpted by Ian Rank-Broadley and in use on British & Commonwealth circulation and commemorative coinage from 1998. The face value of five pounds and the year of issue “2012” appears on the obverse legend.

For more information on these and other coins offered by the Royal Mint, please visit their website at: http://www.royalmint.com/olympicgames/london-2012-official-coins/official-london-2012-coin.aspx