The Everglades Quarter represents the fifth and final release of the year within the America the Beautiful Quarters Program, which will feature . This also represents the twenty-fifth release overall within the series currently scheduled to have fifty-six different coins featuring a national park or site from each state, territory, and the District of Columbia. 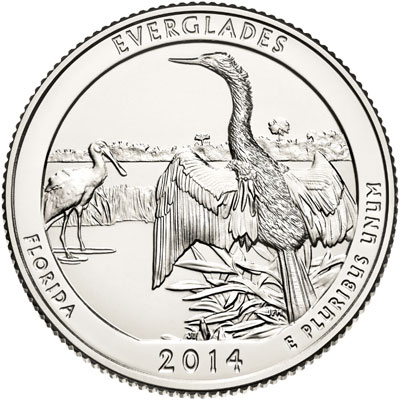 The reverse design of the new coin features a depiction of an anhinga with outstretched wings on a willow tree with a roseate spoonbill visible in the mid-ground. Inscriptions read “Everglades”, “Florida”, “2014”, and “E Pluribus Unum”. The reverse was designed by Joel Iskowitz and engraved by Joseph Menna.

The obverse of the coin features John Flanagan’s 1932 portrait of George Washington with the original details restored. This portrait has been used in common for all issues of the series. Inscriptions read “United States of America”, “Liberty”, “In God We Trust”, and “Quarter Dollar”.

Circulating coins from the Philadelphia and Denver Mint facilities bearing the “P” and “D” mint marks respectively will also be released for general circulation. The circulating quality coins struck at the San Francisco Mint and bearing the “S” mint mark are only released within numismatic products.

The United States Mint and National Park Service have scheduled a launch ceremony for the Everglades National Park Quarter for Thursday, December 4, 2014 at 10:00 AM ET. The event will be held at Harris Filed Park Pavilion in Homestead, Florida.