Editor’s Note: Coingrader Capsule occasionally runs series, such as “Crossover-, Under- and Out,” about submitting coins graded by one company to another company, either to enjoy a premium or to qualify the coin for set registries. This week we start a new series on coins stickered by Certified Acceptance Corporation (CAC), a numismatic firm whose specialty is identifying high quality coins holdered by NGC and PCGS. 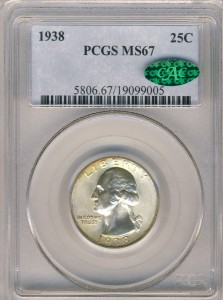 I had been meaning to register with CAC for several months, but a recent news release from the company finally prompted me to do so. John Albanese, founder and president of the company, announced that dealers and collectors who want to become CAC members must apply to do so by May 1. Albanese noted that membership would be closed after that date, at least through the end of 2011 and possibly beyond.

Before we introduce CAC to viewers unfamiliar with the service, we first should define terms “first-party grader,” “second-party grader, “third-party grader,” and so forth. These terms sound a lot like first-, second- and third-tier grading companies. We’ll be using both terms here, so let’s discuss them.

The seller of a coin is considered the first-party, apt to overgrade a coin to get the highest price. The second-party is the buyer, apt to downgrade a coin to purchase it inexpensively. Third-party grading companies came into existence to arbitrate between seller and buyer, assigning numerical grades on the Sheldon 1-70 scale as objectively as possible. Third-party grading companies that reportedly do this best are PCGS and NGC. They are “first-tier.”

CAC is considered by some to be a fourth-party grader; but it really isn’t. All it is doing is verifying the grade assigned by the aforementioned first-tier grading companies.

Until recently I had been wary about CAC, believing with all the pluses and stars–not to mention VAMs–the last thing we needed was a sticker. However, as I see NGC and PCGS instituting new fee-based policies (see my recent post), I am writing about CAC and planning to submit to it with an open mind, happy that at least the company seems more concerned about numismatics than fees.

The process of becoming a member requires that you send an email to the company, requesting an application. You have to qualify for submission rights as an “Advanced Collector/Submitter.” The application requires membership in the American Numismatic Association, and even requires that you provide three references with contact numbers. You also have to agree to its Terms of Service (nothing alarming there), signing a contact. For instance, the company seems open to suggestions and even criticism, as its materials and Website keep requesting same.

That also impressed me.

What did so even more was the no-fee policy for coins sent by Advanced Collectors that do not earn the CAC sticker. (Dealers are presumed to be professional and so have to pay a small fee.)

There are two basic service levels, and an introductory price schedule for Advanced Collectors. The company states: “[C]oins valued at $10,000 and under are $10 per coin; coins valued over $10,000 are $20 per coin.” Those who become members before the May 1 deadline will be locked into this pricing for 100 coins per year, until Dec. 31, 2012.

The CAC website indicates on this page that service levels may change in the future, having several levels (yet to be announced). Introductory pricing is still in effect.

You can read about submission procedures here and about eligible coins here.

What are you paying for when you submit coins to CAC? Of course, the company cannot guarantee premium prices for stickered coins. Also, keep in mind that high-end coins have commanded higher prices before John Albanese–who founded NGC and co-founded PCGS–ever conceived of his new company.

His service helps verify, directly and indirectly, several types of coins. It stickers only two: “A” ones, high for the grade–tantamount, I suppose, to pluses and stars (although any such insignia on NGC and PCGS labels will be ignored during CAC evaluation), and “B” ones, good for the grade. “C” coins are low-end and not stickered, under the assumption that they should trade at a discount. “D” and “F” coins are misgraded or contain ghastly mistakes. To its credit, CAC does not include in its population reports grades of coins submitted already that did not receive a sticker, although it knows about such coins because submitters have to include on the CAC form the NGC or PCGS certification number. The reason concerns the company’s not wanting to devalue holdings by hobbyists. CAC is open to reconsidering coins that did not receive a sticker but whose owner believes that they should have.

The company, based in Far Hills, New Jersey (my home state), was founded in 2007. Since then it has received more than 200,000 submissions with a declared value exceeding $1 billion. Based on 2010 statistics, it stickers just over 47% of coins.

In future columns, I will address submitting some of my coins to CAC, disclosing in advance whether I consider them A, B, or C. I will report the results. Then I will sell those coins on Teletrade, which lists realized prices for similar coins. Finally, I’ll note whether the coins received a premium. (Keep in mind, however, that this will be only a test with an exceedingly small number of coins and not meant to affirm or discount CAC services, but merely to share my experience with our viewers, who can decide for themselves.)

If you submit coins to CAC already, by all means share your personal experience here in the comments section.