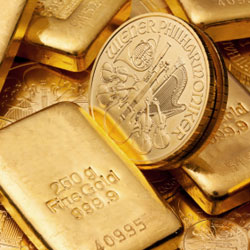 Amid all the turmoil with the decline in the value of the Euro, falling global stock markets, a temporarily strong US dollar, civil unrest in Greece, gold and silver prices have been extremely volatile.

As dramatic as was today’s news coming out of the COMEX, the news from Europe is even more exciting.  Worried Europeans are flocking to buy physical gold.  Dealers across Germany have been virtually cleaned out and inventories are not much better elsewhere in Europe.  The difficulty of finding any physical gold to purchase in Europe right now is a problem we could easily see in the US within a week or two.

The civil unrest in Greece is also a foretaste of what is likely in store for the US.  The Greek government runs massive deficits, and makes huge subsidies to segments of the population for no economic justification—all on a scale similar to the US!  As just one example, the Greek government considers the career of radio announcer to be “hazardous” because such workers might come into contact with germs on microphones.  So, like about 1/6 of all Greek workers whose jobs are considered hazardous, radio announcers can retire with full government retirement benefits at age 50.

Like Greece, the federal, state, and local governments in the US are committed to economically unjustifiable benefits and subsidies that simply cannot be sustained in the long run.  When these government officials are forced to deal with the reality of empty bank accounts and must operate within their means, you can expect to see similar civil unrest—either from 1) the beneficiaries who are losing their largesse, or 2) the dwindling number of people who pay the governments more in taxes than they get back (who would be under pressure to pay even more in taxes).

Even ignoring Europe, stories of physical supply problems are now growing every day.  The number of people who own “paper” gold or silver who are now trying to convert such contracts, accounts, shares, etc. into physical metal has soared.

Here’s just one typical story about what is happening.  An owner of certificates issued by ScotiaMocatta for silver supposedly held in the bank’s vaults in Toronto this week tried to turn in the certificates and pay the charge to have his account converted into specific physical silver.  He was told that the kind of certificate he owned did not have the option to be converted into physical product.  Upon hearing this, the man sold his certificates and asked ScotiaMocatta for a price to purchase physical silver.  He was quoted such a high premium, that he ended up going to a coin dealer to pay a lower price.

I’ve said this several times in my writings, but I am going to keep repeating it until everyone gets the message—seriously consider turning any certificates, exchange traded shares, commodity contracts, London Bullion Market Association (LBMA) contracts, and unallocated storage accounts into physical gold or silver in your direct custody or stored in a segregated location under your own name.

Here’s an example of why this is so important.  Worldwide silver mining output is roughly 2 million ounces a day.  Yet the LBMA, on a net basis, is adding commitments to deliver physical silver averaging about 45 million ounces per day!  At most, there may be only a few hundred million ounces of physical silver inventories available to cover claims for all paper contracts for silver.  I just don’t see where someone who might own an LBMA silver contract could realistically ever expect to be able to get any of the supposedly underlying physical silver.

Apparently, my speculative column from three days ago generated wide interest and more than usual controversy.  As I pointed out, I considered my discussion for the drop in precious metals prices on May 4 to be a plausible explanation, although there was a good chance that it would never be proven or disproven.

Much of the financial turmoil of the past 72 hours fits within that speculative discussion, but there are alternative possible explanations.  The important point that I wanted to leave with readers, and let me emphasize it again right here, is that those who trade gold and silver with the understanding that prices are suppressed by the US government and its trading partners (including both US and foreign entities and even other central banks) are making higher profits than those who reject the idea that prices are manipulated.  You don’t have to concur with the idea to use the theory of price suppression for your own financial benefit.