The National Bank of Slovakia have issued (25th February) a new collector’s coin which marks both the appointment of a Slovakian city as European Culture Capital for 2013 as well as highlights the historical city as a world recognized preservation site.

Košice, the second largest city of Slovakia, developed into a chartered town in the 13th century owing to its location as the crossroads of trade routes in the Hornád river basin. By the end of the century, Košice was an established medieval town surrounded by stone walls. In the 14th century the town was granted a royal charter and saw work begin on St Elisabeth’s Cathedral, the huge Gothic landmark that would come to dominate its extended lenticular square. The cathedral dates back to the last quarter of the 15th century and is among the largest of its type in Europe. Standing next to the cathedral is a separate bell tower (Urban’s tower) and St Michael’s chapel, which was originally a charnel house (a vault or building where human skeletal remains are stored).

The size and importance of the medieval town is evident from the local monastic buildings. Indeed the oldest preserved church in the city was established as part of a Dominican monastery. The town is home to numerous baroque and classical palaces as well as Burg houses, many of which still have their original medieval cellars. At the end of the 19th century the spectacular Reduta building and theatre was built in the main square. In 1983 the city and its historical core was declared an historical preservation area. As a first for any Slovak city, Košice has been chosen as the European Capital of Culture for 2013 by the European Council. 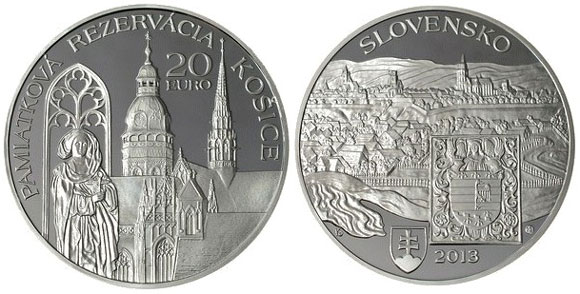 The silver coin, struck by the Kremnica Mint and designed by Karol Ličko, features a view of the Košice townscape circa 1617 – along with the city’s historic coat of arms on the obverse. The coat of arms of the Slovak Republic appears in the lower part of the design with the year 2013 to its right. The country name “SLOVENSKO” is in the upper part. The stylised initials of the designer are placed next to the left edge, while the mintmark of the Kremnica Mint lies to the right of the Košice coat of arms.

The reverse design depicts some of the architectural landmarks of Košice’s historical preservation area, including St Elisabeth’s Cathedral and St Michael’s Chapel. Situated on the left of the design is a statue of St Elizabeth of Hungary, the town’s patron saint, from the altarpiece of the cathedral’s main altar, shown together with a Gothic arch and stylized lettering. Along the edge of the design, from left to right, is the inscription PAMIATKOVÁ REZERVÁCIA KOŠICE (Historical preservation area of Košice). The denomination 20 EURO appears in the upper part.

For more information on this and other coins struck for the National Bank of Slovakia, please visit the website of the Kremnica Mint at: http://www.mint.sk/nakup_novinky.php Information offered in English – international orders fulfilled.