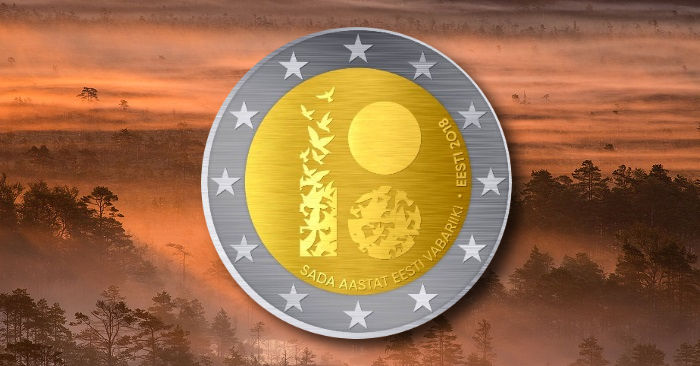 The Bank of Estonia have announced (14th November), that, as part of the Country’s national celebration of their centenary of independence proclaimed in 1918, they will be issuing several coins consisting of a silver collector coin, a gold coin, and a two-euro coin with a special design for the anniversary of the Republic of Estonia. The bank unveiled the chosen designs for their gold and silver issues and confirmed they will also participate in a joint-issue which will include a two-euro coin. The special design celebrates the centenaries of all three Baltic States, including Latvia and Lithuania, to recognise the year in which all three states declared their independence from the government of Russia. The decision by all three provisional governments was precipitated by the abdication of Czar Nicholas II in March 1917 and the fall of the Kerensky government later that year.

The Bank of Estonia declared that the approaching centenary anniversary of the Republic of Estonia is a significant milepost on the country’s road to independence and a historical event that touches every Estonian. The Bank’s contribution to the national celebrations would be in the form of four coins that will be publicly available by February 2018 at the latest. The date of the actual declaration was the 24th February 1918.

The competition to design the silver and gold coins for the 100th anniversary of the Republic of Estonia was held in two rounds. In the first round of the public competition, 13 complete designs for the silver and gold coins were entered. The panel convened by the Bank of Estonia decided to hold a second round where six designers, or groups of designers who had previously successfully designed a collector coin, were invited to submit designs for the coins. The designs received were assessed by the panel which selected the three best designs for the gold and silver coins, from which the bank’s supervisory board chose the eventual winner. The supervisory board confirmed the winning designs of the design competitions for the gold and silver coins on the 19th June 2017, with public confirmation being announced on the 14th November. The Bank of Estonia will finalise the reverse designs for the gold and silver coins in due course, and the €2 coins will include the common reverse design used on all currently circulating eurozone type coinage.

€100 gold coin: The gold coin with a nominal, or face value, of 100 euros chosen by the bank was designed by Tiiu Pirsko and Mati Veermets. The design features a stylised version of the Estonian national flower, the cornflower, and the oldest Estonian geometric design, in which the symbols represent perfect happiness, development, and balance. The bank plans to issue 3,000 Proof quality pieces.

€10 silver coin: The silver coin with a nominal value of 10 euros was designed by Margus Kadarik and Toomas Niklus. Their design features the outline of the map of Estonia in blue, black, and white on a globe. In the sky above is a line of poetry by the young Estonian poet Kristjan Jaak Peterson (1801–1822) in the shape of a spiral which reads KAS SIIS SELLE MAA KEEL LAULU TUULES EI VÕI TAEVANI TÕUSTES ÜLES IGAVIKKU OMALE OTSIDA (“Is not the language of this land singing in the wind, or rising to heaven, looking for eternity”). The bank plans to issue 7,000 Proof quality pieces.

The €2 coin, which is intended for circulation, was designed by the concept and graphic design agency Identity OÜ. The coin’s national side features the official national logo for the centenary celebration anniversary. The logo includes a stylised numerical date which can be read as the numbers “18” and “100,” linking the year the state was founded with the 100th anniversary. The issue of the coin will be directly linked to the country’s population and, as such, the mintage will be set at exactly 1,317,800 pieces — matching the numbers of Estonians as of the 1st January 2017, according to data from Statistics Estonia.

The additional €2 coin with the special commemorative theme for the centenary of all three Baltic states was designed by the Lithuanian designer Justas Petrulis, who work features on a coin for the first time and was chosen through a public vote. It will enter circulation on the 31st January 2018 with the same design being released into circulation in Estonia, Latvia, and Lithuania. The primary design reflects the common past, present, and future of all the Baltic states as a single plaited braid. The Bank of Estonia will issue 500,000 pieces, the Latvian Central Bank will issue 512,000 pieces, and the Lithuanian Central Bank will issue one million coins.