Estonia, one of the three Baltic republics tucked away in the northeastern corner of Europe, just south of Finland, has one of the most colorful numismatic pasts for both its size and history. Having only gained their independence as a republic in 1918, this status was sadly short-lived after the conclusion of the Second World War. In the last one thousand years, Estonia had been fought over by the Danes, the Germans & the Hanseatic League, the Poles, the Swedes and finally the Russians. Fast forward half a century since it’s internationally un-recognised incorporation into the USSR and the onset of Gorbachev’s Glasnost which finally resulted in Estonia’s (as well as Latvia’s and Lithuania’s) re-emergence as an independent nation once more.

Photographs for this article by Michael Alexander.

The coinage of Estonia reflects all of these eras insomuch as one will find many excellent examples of the coins of these ruling powers in the country’s many museums and archives. On a recent visit, I had the opportunity to view both the Bank of Estonia’s own Money Museum as well as the History Museum’s (Ajaloomuuseum) numismatic collection, both located in the heart of Tallinn, one of Europe’s best-preserved medieval old towns having gained UNESCO heritage status in 1997. More recently, and as a member of the EU since 2004, Estonia made the transition to the Euro single currency (on the 1st January of last year) and retired the Estonian Kroon after a successful 19 year run. 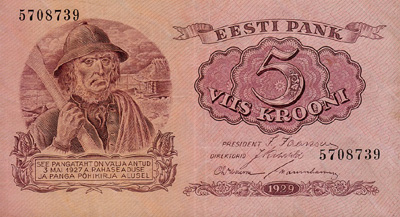 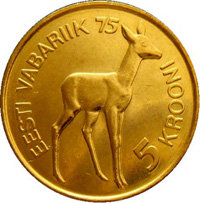 Previously, the Estonian Kroon was the national currency since 1928 until they were forcibly annexed into the USSR in 1944 when it was replaced by the rouble. After the re-establishment of independence, the Bank of Estonia was also promptly re-established and one of their primary aims was to re-introduce the country’s chosen circulating currency, which they did with noted success in 1992. The colorful banknotes depicted several noted national personalities as well as those who were active in the “Estonian awakening”, that of the movement to push for independence and to assert a national & ethnic identity during the early & mid-nineteenth century. Estonian circulation coins however, were not too innovative, but took their cue from those of the earlier coins issued from the 1930’s – very basic with the value in broad bold numerals on the reverse and a shield or emblem on the obverse. Issued in six denominations, there were also two commemorative 5 Kroon coins. The first was issued in 1993 on the occasion of the 75th anniversary of the first proclamation of Independence and the second issued in 1994 to mark the 75th anniversary of the formation of the Bank of Estonia. Speaking of Estonian commemorative coins, those in precious metals on the other hand, proved to be artistic and innovative in both topic and technical specification and soon found themselves in high demand with collectors in contrast to the uninspiring circulation types. To date, Estonia can lay claim to being the only EU member state to have had no less than three currencies in circulation within a period of just 19 years.

This time-frame however, wasn’t the first instance that Estonians had to accommodate numerous currencies within a short period. In 1919, there was the new Estonian Marka which replaced the Imperial and RSFSR Rouble. In 1928, the Kroon replaced the now-defunct marka and in 1940, with the invading Soviet army, the USSR Rouble replaced the Kroon. From 1941 until the eventual retreat of Nazi forces in 1944, the Reichsmark was in use with the eventual re-introduction once again of the USSR rouble until 1992. The Bank of Estonia’s money museum accurately and interestingly chronologies the activities of the country’s currency as well as the background circumstances which resulted in those changes. 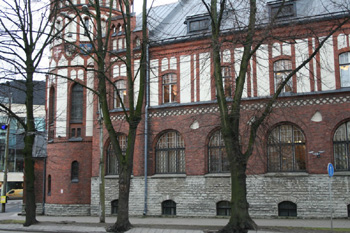 I had visited the Bank of Estonia’s money museum some years ago when the premises occupied a much smaller space and the exhibitions were limited to that specific confine. Even then, the displays were well done, informative and they managed to put on show some extraordinary artifacts and items which were indeed fascinating and quite fascinating… real museum quality objects in a small central bank museum.

At the end of 2010, the Bank of Estonia carried out extensive renovations where the new museum would both increase in size and the premises would now integrate greater portions of the old Estonian Nobility’s Credit Union, a landmark building adjacent to the Bank of Estonia’s main premises. After more than a year’s careful restoration, the new museum was opened in January of this year and, I can say first-hand, the wait was well worth it. I was truly impressed with the restorative work carried out on the interior of the building itself with careful detail paid to the original marble and wood fixtures. The tower and spiral entrance itself is something to see with its stained glass windows (which miraculously survived the Soviet air-raids in 1944) depicting cultural life in the countryside and the hand-painted murals of national crests and emblems – also painstakingly restored. Another unexpected feature is the welcomed addition of the life-size mannequin figures of the personalities who were prominent on the last series of colorful banknotes in use from 1992 to 2011. They are positioned in the main hall throughout and are startlingly accurate in their depictions! From traditional interior and displays to a more contemporary and interactive setting in the adjacent hall, the Bank of Estonia’s Money museum highlights Estonian currency from its earliest phases right up to the introduction of the €URO in 2011. 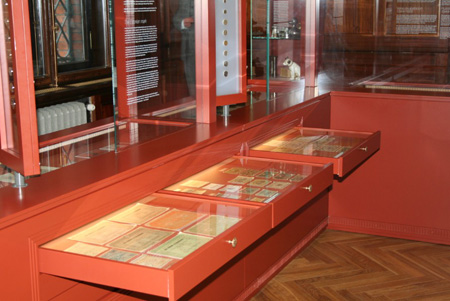 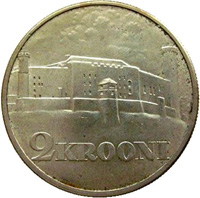 The Money Museum includes every banknote and coin issued since independence in 1918 – from initial promissory and credit notes to the first actual currency banknotes denominated in the original Marka system. In one specific featured display, are the very printing plates eventually re-discovered in 2000 by the Bank of Estonia which had been carefully buried in 1940 by a diligent employee perhaps thinking the Bank may need to re-print banknotes after the Soviet invasion. These printing plates went on display after they were un-earthed in a special exhibition in 2002 and I had the opportunity to review the new addition shortly after their initial debut. Dated with their year of their intended issue of 1940, the plates were used for an initial print run but, these notes were never used and eventually all Krooni notes of that era were withdrawn and forcibly exchanged for USSR roubles. I am told that the Bank never discovered who the loyal Bank employee was who had heroically hid the printing plates for their eventual and hoped-for later use. The plates now form part of the permanent displays of the bank’s exhibition. 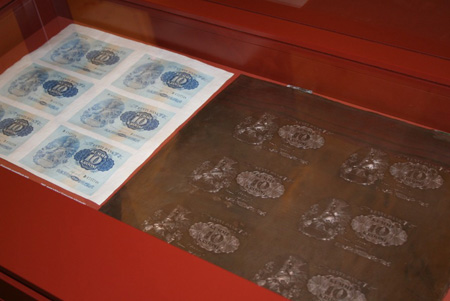 Through the original green-door vaulted entrance into the strong-hold, you can venture down to the treasury room which used to serve as the depository of the Estonian Nobility’s Credit Union. Located in the basement, the cavern-like space also includes a small jail – replicated with bars which in medieval times would have served to hold counterfeiters… before the offender was met with an unspeakable punishment for his crime! (Yes, there is a clever re-creation of the fate of the offender…)

The second chamber on the main floor of the Museum includes the inter-active portion with on-screen games & displays and a ticker-tape scrolling marquee with the latest quotes for the world’s stock markets. Also in the display is a complete collection of all €URO coins currently in use within the €URO-zone which includes those of Estonia since January 2011.

For any coin & banknote enthusiast, a visit to the Money Museum is a must-see attraction. Tallinn has emerged as a very exciting and vibrant city who has managed to preserve the character and structure of its colorful Hanseatic & medieval past. As a collector, another reason to visit is the museum’s gift shop where you can purchase the latest coins and sets direct at issue prices. Estonian commemorative coins have become very popular with collectors due to their limited mintage and design. To date, there have been 29 collector coins issued, in platinum, gold and silver. The most recent coins, denominated in €URO’s include one silver crown of €10 and a gold €20 marking the membership of Estonia in the €URO-zone. The new Bank of Estonia Money Museum is open from Tuesday to Friday from 12:00 pm until 5:00 pm and on Saturday from11:00 am to 4:00 pm. Admission is free for all.

I would like to thank Ms. Siiri Ries, Bureau of Public Relations at the Bank of Estonia for all her valuable and kind assistance with the writing of this article, it is greatly appreciated.