On the 1st January 2011, Estonia became the 17th country to join the Euro Zone. The first part of this two part article will briefly explore the history of the country, the re-introduction of the Kroon in 1992, and the adoption of the Euro in 2011. The second part of the article will feature an interview with Rait Rosve, Head of the Bank of Estonia’s cash and security department, conducted by Michael Alexander of the London Banknote and Monetary Research Centre . 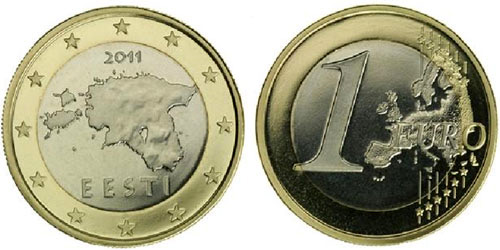 Estonia is an extraordinary nation, in so many ways. A country with an impressive thousand-plus year history, it was mentioned and noted on Roman era maps. With its remarkably well-preserved 12 centuries old town district in the middle of the capital, Tallinn, the historical presence of Estonia is certainly on show. It has seen itself included in the territory of Denmark, the Teutonic Orders, Sweden, and finally Imperial Russia until it achieved full independence in 1918 after the overthrow of the Czar. However, Estonia experienced the most degree of upheaval and transition during the Second World War with occupation from German armies in 1941 and then Soviet armies in 1944 who eventually re-absorbed the 22 year old nation into the Soviet Union. Much of the country’s intellectual and national identity was disassembled and forcibly “Russified” in order to fit into the USSR. Though this absorption was never recognized by countries such as the United States or the United Kingdom, it seemed as if the situation would never change, that is until the era of Mikhail Gorbachev’s policy of perestroika and Glasnost.

Suddenly, there was light at the end of the 50-plus year old occupation of Estonia and the two other Baltic nations of Latvia and Lithuania. Events moved so quickly, that within three years of Gorbachev becoming General Secretary of the Communist Party of the Soviet Union in 1985, a proclamation, the Estonian Sovereignty Declaration was issued on the 16th November 1988, and formal independence once again declared on the 20th August 1991.

Estonians pride themselves on being the first former Soviet era country to have issued a viable, internationally recognized and convertible circulation currency. The Kroon made its debut on the 20th June 1992, just ten months after a re-declaration of formal independence. These colorful banknotes depicted Estonian heroes and persons who are credited with the national awakening and of supporting independence when Estonia was then, a part of Imperial Russia. 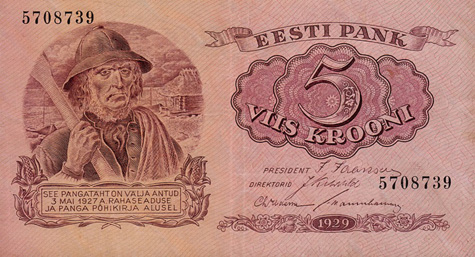 Fast forward to 2004 and Estonia once again, finds herself a part of a union, this time it is voluntary and it is the European Union, the world’s second largest economic entity. As part of the accession agreement, Estonia adopted the Euro on the 1st January 2011. In this respect, it has the distinction of having introduced two completely different currencies within two decades.

The Bank of Estonia commissioned the Finnish Mint to produce the eight denominations of coins which will go into circulation and will transport enough banknotes to satisfy the needs of the nation’s 1.4 million citizens. The coins were designed by artist Lembit Lõhmus and they depict the contour of Estonia’s map. Weighing in at more than 600 tonnes, it will take about 30 truckloads to move the new Euro coins and banknotes which will then be transported by ship between Finland and Estonia.

It is expected that the change-over will last about two weeks and thereafter, Estonians will be using only the Euro in their daily transactions. Taking into consideration that the first monetary reform went without a hitch, it is likely that this new chapter in Estonia’s monetary history will proceed just as smoothly as that of 1992. We wish them the best of luck or, as they say in Estonia “Head õnne.”
Read Part Two of this article for an interview with the head of the Bank of Estonia’s Head of Cash and Security Department.