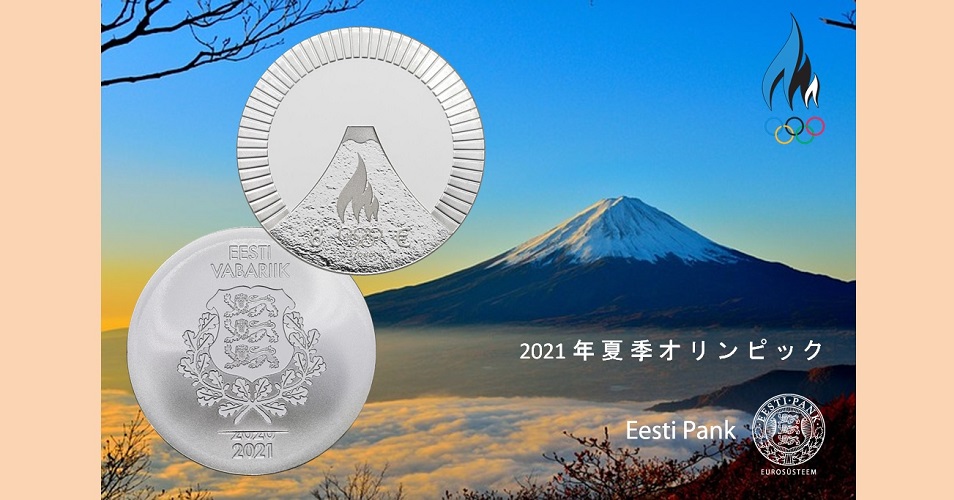 The Bank of Estonia has released (26th May) their newest silver Proof collector coin which focuses on this year’s Olympic Games hosted in Tokyo — one year later than planned. Due to the worldwide COVID-19 pandemic which saw many international events postponed or cancelled entirely throughout 2020, the XXXII Olympiad had been one of the events which the International Olympic Committee organisers announced they would stage one year later from the date planned.

The city of Tokyo was awarded the Summer Olympic Games of 2020 during the 125th conference of the International Olympic Committee (IOC), which took place in Buenos Aires on the 7th September 2013. The XXXII Olympiad will be the second time that the city of Tokyo hosts the Summer Games, the first time having been in 1964 for the XVIII Olympiad. Estonia’s Olympic team first took part in the Olympic Games over the period of 1920–1936 during the country’s initial period of independence, which was achieved in 1920. The Estonian Olympic Committee was formally recognised by the IOC in 1923. As Estonia re-established its independence in 1991, they resumed participation in the Olympic Games in 1992. Estonia is expected to compete at the 2021 Summer Olympics in Tokyo; the Games having been postponed to the 23rd July to the 8th August 2021. This will be the nation’s eighth consecutive appearance at the Games since 1992 and 13th overall in Summer Olympic history. The 2021 team will consist of 22 athletes competing in eight sports or tournaments.

The coin is produced by the Royal Dutch Mint at their facilities in Houten, Netherlands, on behalf of the Bank of Estonia, and is designed by graphic artist Ander Avila. In a salute to Japanese minimalist style, the obverse side depicts the sun rising behind Mount Fuji, and which will be in clear sight from the primary Olympic stadium whilst the athletes compete. Superimposed over the interpretation of Mount Fuji are the Estonian Olympic logo and the coins’ denomination of 8 € separated by the five-ring insignia of the International Olympic Committee.

The reverse side also acknowledges the postponement of the XXXII Olympiad, as under the Estonian National crest a portion of the year 2020 is visible and crossed out. Just underneath, the year 2021 is shown as the actual year of competition. Above the crest is the coins’ issuing authority, EESTI VABARIIK

Each Proof-quality coin is encapsulated and presented in a custom case accompanied by a certificate of authenticity. For additional information about this coin and other coins issued by the Bank of Estonia, please visit OMNIVA, Estonian Post.