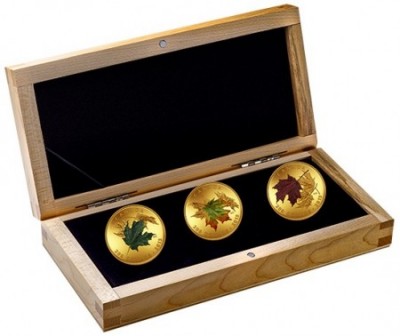 The Royal Canadian Mint has officially launched a new set of three gold coins featuring the extraordinary colors of autumn on each coin’s reverse.

After summer has settled, when we’re home from our exciting holidays and the school year has begun, nature takes those of us in the Northern hemisphere into what many season-watchers describe as the greatest show on earth. The leaves on a variety of trees begin this amazing transformation of changing color from summer’s earthy greens to varying shades of yellow, auburn, and eye-catching red. 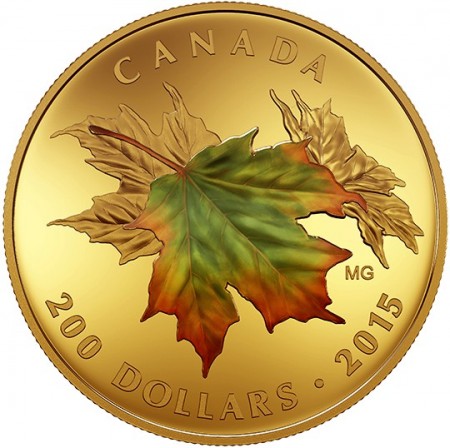 The intensity of these colors is governed by the quantities of sugar in the leaves; Canada’s national symbol, the maple tree, is a primary source of syrup, and its comparatively high levels of sugar allow its leaves to put on a spectacle until they eventually fall with the coming of winter. For much of Canada and parts of New England in America, the colors of autumn are savored by locals and tourists alike, who make it a point to seek out vibrant forests during this time of year. 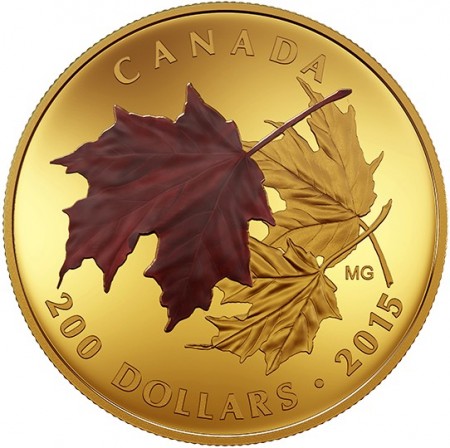 Savor the colorful dance of autumn any time of year with this breathtaking pure gold set. Each coin is beautifully enhanced with color to showcase the maple leaf’s deep summertime green, its early-autumn hues of red, orange, and gold, and the deep crimson that delivers the season’s final crescendo across the landscape.

The coins, designed by Michelle Grant, include three depictions of color-enhanced leaves resting over leaves raised in relief. Precise shading and finishing techniques bring life, depth, and movement to the beautiful autumn leaves as they tumble to the ground. The denomination appears on the reverse along with the year of issue. The obverse includes the familiar effigy of Queen Elizabeth II designed by Canadian artist Susanna Blunt and used on most Canadian coinage since 2003.

Each coin is presented in a Royal Canadian Mint branded maple wood case with a full color graphic outer box. For more information on these and other coins offered by the Royal Canadian Mint, please visit their Web site. Information is offered in English and French, with international orders dispatched where applicable.