The Government of Niue have issued their latest and fourth coin in the SOS endangered animal series which was launched last December with the issue of the Hyacinth Macaw coin. The latest coin focuses on the Giant Panda, beloved the world over for their beautiful markings and perceived playfulness.

The series focuses on those species in the animal kingdom which are documented as endangered or under threat of becoming extinct in our lifetime. Native to south central China, the Giant Panda is easily recognized by the large, distinctive black patches around its eyes, over the ears, and across its round body. Giant Pandas live in a few mountain ranges in central China, mainly in Sichuan province, but also in the Shaanxi and Gansu provinces. As a result of farming, deforestation and other developments, the panda has been driven out of the lowland areas where it once lived. Today, the panda is a conservation reliant endangered species and a 2007 WWF report showed 239 pandas living in captivity inside China and another 27 outside the country. Despite the Panda’s classification as a carnivoran, their diet is primarily herbivorous, consisting almost exclusively of bamboo. The Panda’s distinction as an endangered species was also highlighted world-wide since it became the international mascot or insignia of the World Wildlife Fund in 1961. 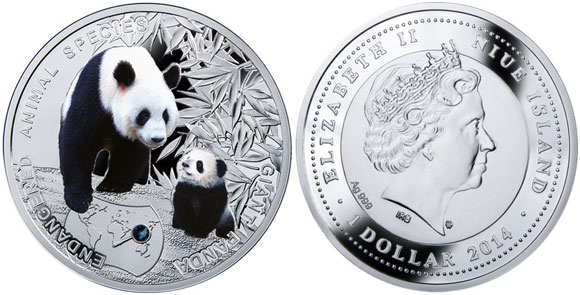 The coin, produced by the Mint of Poland, Warsaw on behalf of the Government of Niue, includes a digitally applied color image of the Giant Panda in a field of bamboo along with colored Swarovski crystal placed on a world map to denote the origins of the panda. The obverse includes the standard and current profile of HM Queen Elizabeth II in use on most commonwealth coinage since 1998 along with the text “ELIZABETH II” and “NIUE” along with the coin’s denomination of 1 Dollar which is placed under the portrait.

The coin is packaged in a colorful round presentation box which includes all of the animals to be featured in this series, to be issued at the rate of one coin per month until its conclusion.

For more information on this and the three previous coins issued in the SOS endangered series, please visit http://www.mennica.com.pl/en/products-and-services/mint-products/coins-of-other-issuers/product/zobacz/giant-panda-1-dollar-series-sos-to-the-world-endangered-animal-species.html and e-mail the sales department directly at:   who will advise about the nearest distributor or advise about retail sales.