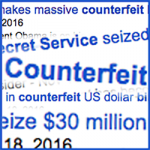 In this morning’s post for his column “The Buzz,” Numismatic News editor Dave Harper considers what it will take to rein in the counterfeiters of U.S. coins. In the post (titled “Time for government to stop fake coins”), he alludes to the Secret Service’s recent “Operation Sunset,” a counterfeit-currency bust that was two years in the making. “When the Secret Service makes a big counterfeit paper currency bust,” he writes, “headlines are made. This was the case when $30 million in fake U.S. paper money was seized in Peru.”

It’s a good thing, obviously, when counterfeiters of any stripe are brought down. But Mr. Harper points out that “what should be making headlines in numismatics is the lack of Secret Service activity in the area of fake coinage.” He adds,

Anything that the U.S. Mint has ever struck since 1792 can be faked in China.

Perhaps we can have a parallel celebration next year.

The Mint celebrates 225 years. Fakers can celebrate 225 years of opportunity.

We might think we know what counterfeiting is, but do we?

He goes on to suggest that an important starting point is to define what is meant by the word “counterfeit,” and lists several examples, from alterations of existing coins to outright fabrications. The upshot, he says, is that not enough is being done about counterfeit coinage, and that it’s time for collectors to make more noise.