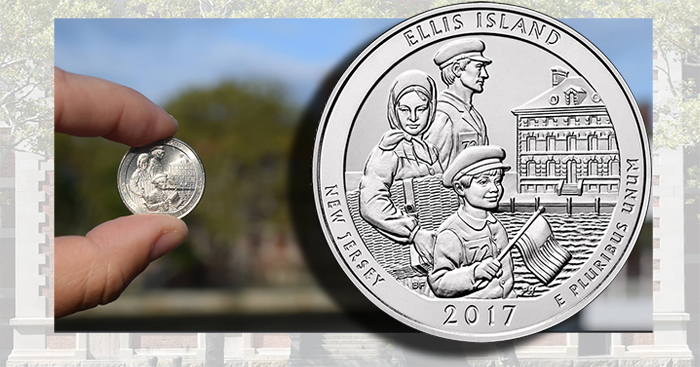 (All event photos by Sharon McPike)

The ceremony took place on Ellis Island, the historic gateway for millions of immigrants seeking new opportunities and experiences in America. About 350 people attended the ceremony, with hundreds more visitors to the island passing through and learning about the new coin.

Media outlets including WMABC, News 12 New Jersey, and the Jersey Journal attended the event and interviewed Todd Baldau, senior advisor to the acting deputy director of the Mint, and Barbara Fox, designer of the Ellis Island quarter reverse. (Fox was also recognized as part of the ceremony.) Additional outlets, including the Associated Press and the Jamestown Post Journal, also covered the event.

The quarter’s reverse design depicts an immigrant family approaching Ellis Island with a mixture of hope and uncertainty. The hospital building on the New Jersey portion of Ellis Island is visible in the background.

“This new coin not only honors the unique history of the largest and most active immigration station in the United States, but also the spirit and determination of the millions of people seeking a better life in America,” said Baldau.

Additional participants in the celebration included Statue of Liberty National Monument and Ellis Island deputy superintendent John Hnedak, who read a letter from New Jersey governor Chris Christie; and projects director Zach McCue, who represented U.S. Senator Cory Booker. Also present was Janis Calella, president of Save Ellis Island, Inc.—the official partner of the National Park Service in the effort to preserve the hospital complex on Ellis Island. Its goal is to ensure that the contributions, values, concepts, discoveries, and stories of Ellis Island are reinvigorated and remembered.

“It’s incredibly fitting that the State of New Jersey chose Ellis Island for inclusion in the United States Mint’s America the Beautiful Quarters Program,” said Ryan Zinke, secretary of the interior. “The National Park Service is a proud steward of this remarkable landmark that tells an important story about what it means to be an American and our history as a beacon of liberty to the world.”

After the ceremony, event attendees eagerly traded cash for $10 rolls of newly minted Ellis Island quarters; $18,500 was exchanged during the coin exchange.

This story includes elements from multiple Mint press releases, including an article by Tracy Chavez.

Editor’s note: The next (and final) item on the Mint’s schedule for Ellis Island quarters is the release of the three-coin set (product code 17AG), to be released at noon on September 14. All product options containing the new quarter may be purchased directly from the Mint via its online catalog at www.catalog.usmint.gov or by calling 1-800 -USA-MINT (872-6468).