The 2012-P El Yunque National Forest Five Ounce Silver Uncirculated Coin went on sale at the United States Mint on May 29, 2012. This represents the eleventh release in the numismatic series of America the Beautiful Five Ounce Silver Coins. 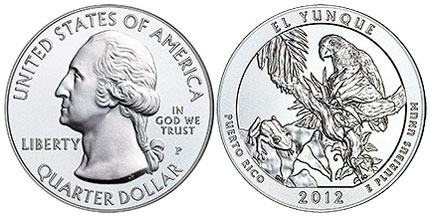 The reverse design of the coin features a scene representative of El Yunque National Forest in Puerto Rico. The Coqui tree frog is pictured sitting on a leaf and a Puerto Rican parrot appears behind an epiphyte plant with tropical flora in the background. The inscriptions read “El Yunque”, “Puerto Rico”, “2012”, and “E Pluribus Unum”.

The obverse design features a portrait of George Washington, from the 1932 Washington Quarter. The inscriptions include “United States of America”, “Liberty”, “In God We Trust”, “Quarter Dollar”, and the “P” mint mark for Philadelphia.

Each coin contains 5 troy ounces of .999 fine silver and has a diameter of 3 inches. The coins have an uncirculated finish and are enclosed in a plastic capsule, set in a protective outer box, and accompanied by a Certificate of Authenticity.

The El Yunque Five Ounce Silver Uncirculated Coins are limited to a maximum mintage of 25,000 coins. The price for each coin is $204.95, but may vary during the course of the offering based on the market price of silver. There are no household ordering limits imposed.