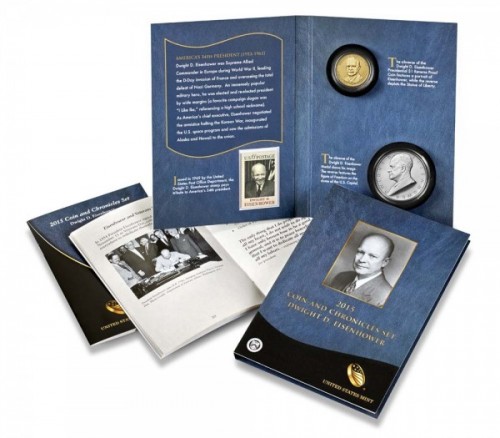 The set includes an Eisenhower Presidential Silver Medal, a 1969 Eisenhower postage stamp, and a Presidential $1 Reverse Proof Coin that is only available as part of this set. This item is expected to be greeted by high demand, so interested collectors are advised to log on to the U.S. Mint’s product page or call 1-800-USA-MINT (872-6468) as close as possible to its time of release.

The coin’s obverse features a portrait of President Eisenhower with DWIGHT D. EISENHOWER, IN GOD WE TRUST, 34th PRESIDENT, and the years of his presidency, 1953-1961, inscribed along the edge of the coin. The reverse includes an image of the Statue of Liberty beside the coin’s $1 denomination. The words UNITED STATES OF AMERICA circle along the coin’s outer edge.

The 1 oz. Eisenhower Presidential Medal is struck in 99.9% fine silver and stretches 1.598 inches in diameter. Its obverse shows a rendering of the president in profile, with DWIGHT D. EISENHOWER circling along the edge of the design. The reverse shows a robed personification of Freedom standing atop the dome of the U.S. Capitol. To the right of the figure is a depiction of the Eastern U.S., with a farmer working the image’s foreground and big city buildings rising behind him in the distance. The left side of the design features pioneers driving a wagon into the American West.

Both the coin and the medal were minted in Philadelphia. The set has a purchase limit of two orders per household, and an overall a mintage limit of 17,000.

The popular Presidential Coin & Chronicles sets are almost guaranteed to sell out. At present only the 2014 Franklin D. Roosevelt set can be purchased on the U.S. Mint’s website; as of August 4, it had sold 13,924 of its 20,000 mintage limit.

The Roosevelt set’s successor, the 2015 Harry Truman Coin & Chronicles Set, obliterated the mint’s sales forecast when it sold 16,780 units during its first fifteen minutes of availability. Last week, the mint listed total sales of the set at 16,833—disconcertingly close to its 17,000 mintage limit for collectors hoping to obtain one. The product page for the set lists the Truman set as “currently unavailable,” adding only that “more may be available later.”

After Eisenhower, the John F. Kennedy Coin & Chronicles set is scheduled for release on September 16, and the Lyndon Johnson set will become available sometime in October.

Update: A press release from the U.S. Mint states that 16,820 Eisenhower C&C sets were sold in “approximately 15 minutes.” The set is currently listed as “Unavailable” on the mint’s website, with the qualification, “more may be available later.”

Portions of this article first appeared at Mint News Blog on 8/7/15.