The Treasury of the Government of the British Virgin Islands has launched (3rd January) an innovative coin which marks the 125th anniversary of the completion of one of Europe’s most well-known landmarks and incorporates the very shape of the monument in the coin itself.

The Eiffel Tower, considered one of the greatest engineering feats in the world was completed one hundred and twenty five years ago in 1889. Originally constructed to feature as a centerpiece for the Exposition Universelle of 1889, the international world’s fair – the fair was also organized to celebrate the centennial anniversary of the French revolution. The tower was designed by engineers Maurice Koechlin and Émile Nouguier who worked for Gustave Eiffel’s architectural firm as early as 1884.

Construction of the tower began in January 1887 and its estimated cost at the time of its initial construction was set at six million five hundred thousand francs. During the construction period, the firm of Gustave Eiffel had to overcome criticism about the tower itself from artisans who did not like the design, there were difficulties with the foundation pylons and it became necessary to assemble parts of the tower at one location and transport the components to the site of the tower. The eventual result was an edifice when completed in March 1889 – was an iron lattice structure standing at 324 meters or 1,063 feet in height, and was the tallest man-made structure in the world, a distinction the Eiffel Tower would keep until 1930.

Initially, the city of Paris had granted the organizers of the Exposition Universelle a 20 year license to keep the tower standing and the plan was to dismantle it in 1909. As the tower had become so admired and visited, as well as being a valuable communications structure, it was allowed to remain part of the Parisian skyline. 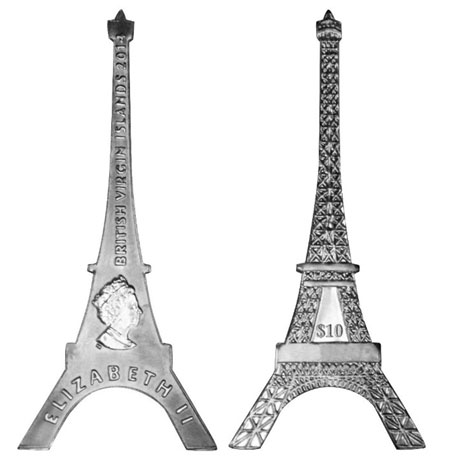 The coin, struck by the Pobjoy Mint, UK – is a faithful replica of the tower, as it is in the shape of the Tower as it was seen before the addition of a 17 foot tall antenna in 1957. The coin also includes intricate detail of the girders – itself, a feat of engineering for the Mint who designed this unusual and unique coin. The reverse of the coin also includes a portrait of HM Queen Elizabeth II along with the text “ELIZABETH II” along the arches and “BRITISH VIRGIN ISLANDS 2014” along the length of the tower.

The coin is available in two versions, a Proof-like Fine Silver strike with an Antique Finish and a Nickel Silver version in UNC quality.

For more information on this and other coins offered by the Government of the British Virgin Islands, please visit the website of the Pobjoy Mint at: http://www.pobjoy.com/ukworld/section.php/1011/0 Information offered in English – international orders dispatched.