The final First Spouse Gold Coin of the year is now available to order from the United States Mint. The coin honors Edith Wilson, the second wife of President Woodrow Wilson.

The latest release closely follows the previous coin of the series issued to honor Woodrow Wilson’s first wife, Ellen Wilson. Two different coins are issued since Wilson served in office with both a first and second wife. 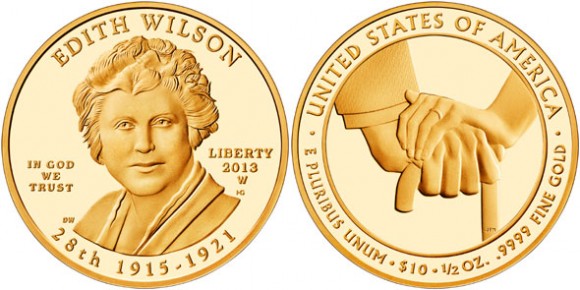 The obverse design of the coin features a portrait of Edith Wilson designed by David Westwood and engraved by Michael Gaudioso. The surrounding inscriptions include her name, the motto “In God We Trust”, “Liberty”, the order of the Presidency “28th”, and the dates “1915-1921”.

The reverse design of the coin features a depiction of President Wilson’s hand on a cane with Mrs. Wilson’s hand resting warmly on top. This image is representative of the First Lady’s support of her husband after he had suffered a massive stroke. Inscriptions appear within the outer circumference reading “United States of America”, “E Pluribus Unum”, “$10”, and “.9999 Fine Gold”.

The coins are available in proof and uncirculated versions with an overall maximum mintage of 10,000 pieces. The ratio of proof to uncirculated coins will be based on customer demand.

Pricing for the coins is initially $815.00 for the proof version and $795.00 for the uncirculated version. These levels may be adjusted as frequently as weekly based on the average market price of gold.

This represents the thirtieth overall release within the First Spouse Gold Coin Program. The one-half ounce 24 karat gold coin series was authorized under Public Law 109-145 to honor the spouses of the Presidents.