Specially commissioned coins produced for the anniversary of the establishment of trade and diplomatic relations between Great Britain and Japan were officially launched on the 10th September 2013. Hosted at the East India Company’s flagship retail store just off Regent Street in the heart of London, organizers of “JAPAN 400” as well as sponsors and diplomats were in attendance to launch both the gold and silver coins which mark this historic anniversary. 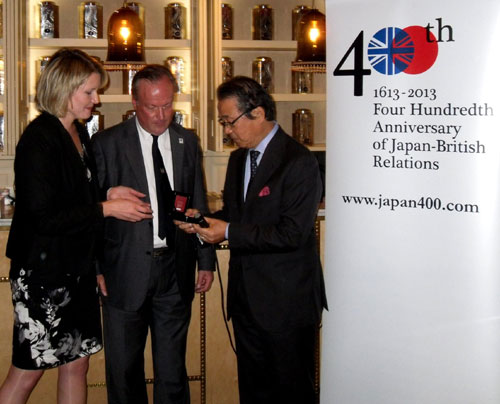 It was in April 1611 when John Saris (c. 1580 – 1643) set sail for the Islands of Japan on behalf of King James I (VI of Scotland) as the captain of the first English voyage to Japan on board The Clove. As chief factor of the British East India Company’s trading post in Java, Saris’ mission was primarily one of seeking trade. After stopping in various ports along the way engaging in regional trade and taking on provisions, it was not until June 1613 when the Clove finally reached its destination when the shores of Nagasaki were spotted and eventually anchored off Hirado. Saris finally landed in Kyoto, the then-seat of government where he met with Shogun (commander) Tokugawa Ieyasu (1543 – 1616) who was to be presented with a telescope – a personal gift from the King himself. Ieyasu was the founder and first shogun of the Tokugawa shogunate of Japan, which ruled from 1600 until the Meiji Restoration of Emperor Mutsuhito in 1868. At the end of 1613, Saris left Japan for England, never to return to the Far East, he died in 1643, and is buried at All Saints Church in London. The chronicles of this amazing voyage was the inspiration of the international best-seller novel “Shogun” written by James Clavell. 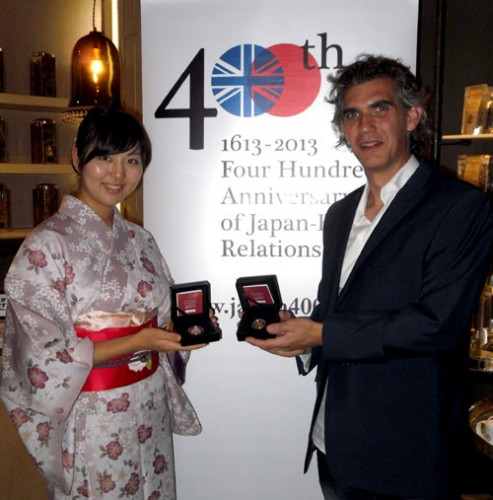 The coins, specially commissioned by the East India Company in recognition of this anniversary, are issued by the Treasury of St. Helena, historically connected to the East India Company itself, and include depictions of Shogun Tokugawa Ieyasu who welcomed Captain John Saris as well as that of King James I (VI of Scotland). Designed by former Royal Mint Chief Artist Matt Bonaccorsi – who now heads Maverick Numismatic design, Matt chose to include contemporary renditions of both men based on their portraits at the time as well as an illustration of The Clove representing the connection between both countries. The inclusion of both heads of state represents a balance between the two nations as well as the two distinct styles of art prevalent in both respective cultures. 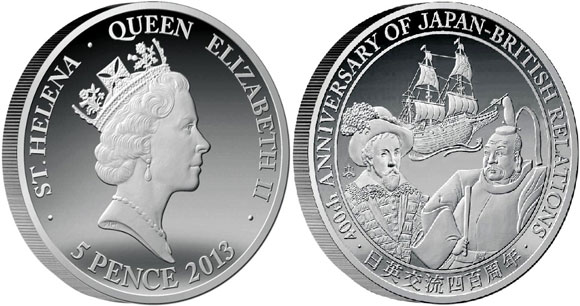 The coins have seen tremendous success in Japan as it is usually customary to not include the images of persons. During the launch, coins were presented to the current head of the Tokugawa family, a direct descendant of the Shogun Ieyasu who remarked on the extraordinary friendship between the two countries which although have had some strains, is still strong and flourishing. 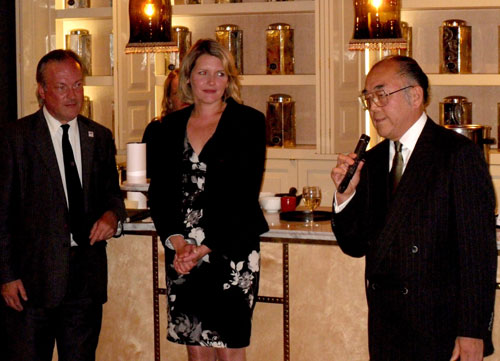 The East India Company report that only a very small quantity of the silver version of the Japan 400 commemorative coins remain in stock and are available, for more information on both the gold and silver coins, please visit their website at: http://www.eicgold.com/japan400/ A donation of £10 from the sale of each silver coin (face value of 5 pence) and £100 from the sale of each gold coin (face value of 50 pence) will be given to the “Japan 400” organization to ensure that future generations will be able to benefit from the legacy of this special anniversary, through a range of educational and monumental restoration projects. 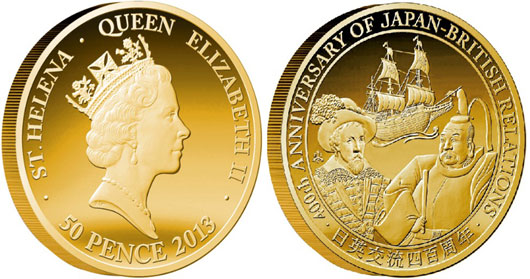 Additional events marking the anniversary will continue until the end of the year. One event on offer is Hatfield House, who has put on a small display of Japan-related documents in the Library. The display includes a letter from Richard Cocks, who traveled to Japan on the Clove. This display runs from now until 29 September 2013. http://www.hatfield-house.co.uk/

Maidstone Museum and Bentlif Art Gallery. Treasures from Hirado tells the story of the opening of Japan to the western world in the seventeenth century, and features artifacts never before seen in the UK. Exhibition on from now until the 2nd November 2013. http://www.museum.maidstone.gov.uk/exhibitions/

The Ashmolean Museum in Oxford is displaying information on the “Japan 400” celebration in its Japanese Galleries and will include a display case with a screen and an album, which are both from the 17th century and are contemporary to the time when Britain and Japan first encountered each other. Exhibition on now until the 14th December 2013. http://www.ashmus.ox.ac.uk/about/