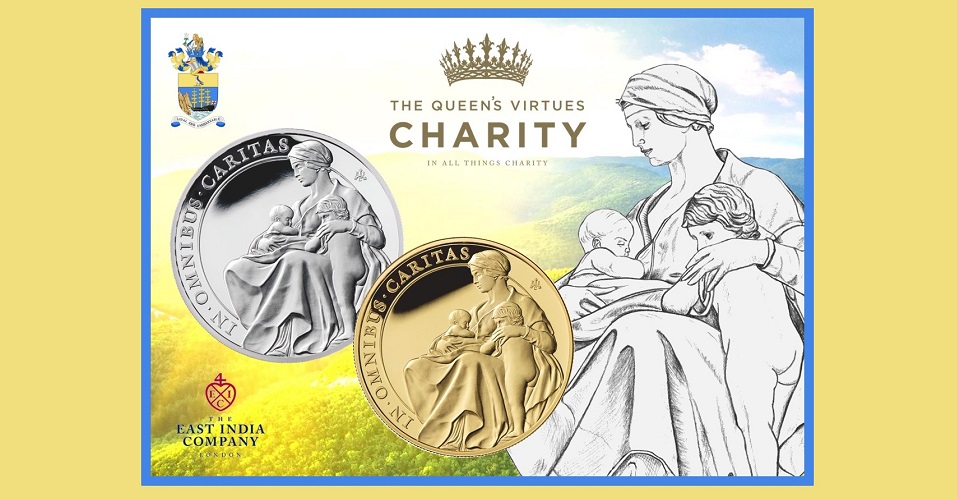 The East India Company, in association with the government of St. Helena, are pleased to announce the third release which is part of the popular series of collector coins entitled “The Queen’s Virtues Collection.” The series, launched in honour of the 95th birthday of HM Queen Elizabeth II, which she celebrated on the 21st April 2021, is inspired by the “Virtues of a Queen” and proudly celebrates this important milestone event. When completed, the series will include a beautiful collection of six designs that represent these qualities and virtues.

While the first coin featured Victory and the second Truth, the third design and theme focus on Charity. It is said those who display a true sense of charity show compassion for others, a great desire to give of themselves, and, most of all, live a life of true generosity and sharing. As monarchies transitioned from authority to influence, it was Queen Victoria who believed the crown should lead through the guidance of philanthropy rather than political power.

Today, Queen Elizabeth II is patron to more than 600 charities and organisations across the UK and Commonwealth. At the height of her activities, she was estimated to have helped raise more than $2 billion (or £1.4 billion) a year. During the first 60 years of her reign, it is documented that during her long reign, Her Majesty has contributed her time and attention to more charities than any other monarch in history. As part of a most solemn and charitable act before every Good Friday, the Queen participates in the Maundy Thursday ceremony. This involves the handing out of small silver coins equal to the Queen’s age in red or white leather pouches, to as many men and women also equal to the sovereign’s age, along with a current £5 crown coin.

The third coin highlighting Charity is depicted with an extraordinary design created by accomplished artist Elles Kloosterman. Her designs are based on the acclaimed Victoria Memorial situated outside Buckingham Palace. Charity is represented by a sculpture portraying motherhood and a serene woman seated while holding a baby she is nursing. Her left arm holds an older child closely and to her right knee is a third child holding a satchel of money, symbolising generosity with one’s wealth to others. To the left of the design along the edge is the Latin inscription IN OMNIBUS CARITAS (“In All Things Charity”). The distinctive privy mark of the East India Company is placed to the upper-right, a mark of quality that is applied to all of the East India Company’s modern coinage. The obverse side includes the Commonwealth effigy of HM Queen Elizabeth II created by engraver Jody Clark and introduced onto the coinage of St. Helena in 2019. The issuing authority ST. HELENA is included in the legend surrounding the Queen’s likeness with the denomination and year of issue 2022 shown below.

Available from the 24th January 2022, each encapsulated coin is presented in a custom case and is accompanied by a numbered certificate of authenticity and information booklet. The gold and silver options are available directly from the website of the East India Company.

Forthcoming coins in the series:

The fourth coin will illustrate a Winged Angel of Justice with a sword in hand symbolising the reputation of a just and righteous queen. The child to her left carries her scales of justice, the symbol of unbiased pronouncement.

The fifth coin in the series will show the allegorical symbol of Courage wearing a helmet and bearing a club with a cloak swirling in the wind.

The sixth and final coin will highlight the image of Constancy holding a ship’s compass symbolising the virtue of remaining on course and committed to purpose.