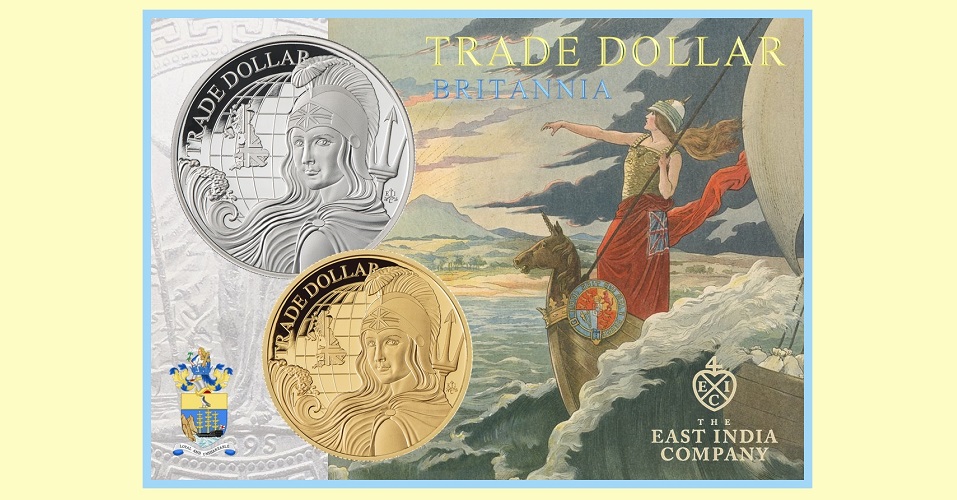 The East India Company, in association with the government of St. Helena, have launched the 2022 British Trade dollar collection, the second issue of the “Modern Trade Dollar” series. The series began in 2021 with the release of a contemporary interpretation of the Chinese Trade dollar of 1889. This collection of gold and silver coins will tell the stories of the global currencies that simplified international trade in the era before the idea of globalisation was commonplace. Between the 16th and 18th centuries, the real, Spain’s primary silver coin, was the currency of reference for world trade. The English in the American colonies referred to it as the Spanish dollar and ended by adopting it as their own until the emergence of the American dollar. Spanish dollars became so prevalent around the world that they ultimately standardised currencies between nations to facilitate international trade. Produced with consistent quality and specification equal to eight Spanish reales, these reliable, trusted Spanish dollars were the precursors to the British pound and the U.S. dollar in terms of worldwide recognition and acceptability.

In 1895, nearly 400 years after the production of Spanish dollars, the British Trade dollar was introduced to help British merchants trade in Oriental silks, porcelains, spices, and teas, a market which flourished at the end of the First Opium War. It was just the second time that the British minted a coin purely for the purpose of international trade, the first being the Portcullis money or Testern silver coin of 1601, which was issued by Queen Elizabeth I for the East India Company’s first voyage to the East. The 1895 silver British Trade dollars were minted to the same specification as the Spanish dollar, which was still the most trusted silver coin used in international trade of the day. These British coins were subtly designed with an Oriental key pattern around the edge, the original British Trade dollar was used exclusively in the Far East and for the first time on a coin, its design depicted a standing Britannia holding a trident and shield, with a merchant ship in the background.

Designed by acclaimed artist Chiara Principe, the 2022 British Trade dollar Proof coins pay tribute to the coins’ history with a new design inspired by the original: A modern interpretation of Britannia facing forward; an element of the Union Jack is shown on the visor of her helmet. To her left shoulder is a trident and over her right is a map of the United Kingdom in the background. Along the upper-left half of the coin is the text TRADE DOLLAR. To the right of the trident is the distinctive logo and mintmark of the East India Company. 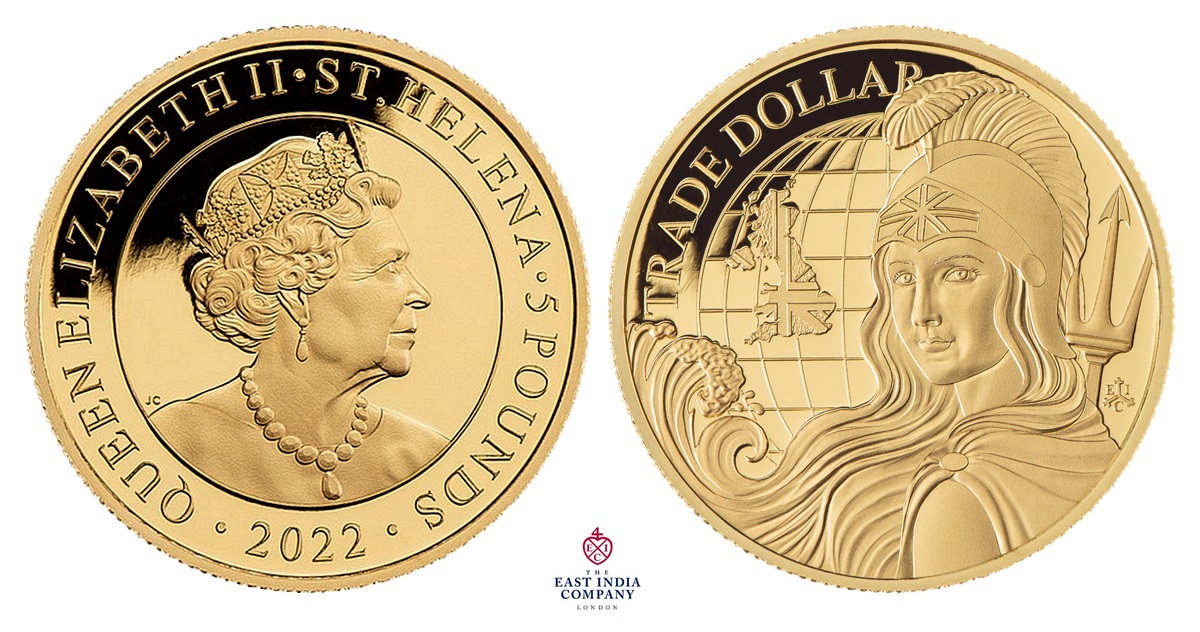 The obverse side depicts the commonwealth effigy of HM Queen Elizabeth II designed by engraver Jody Clark along with the text ST HELENA and the denomination of 5 POUNDS (gold) or ONE POUND (silver) placed around the Queen’s likeness. The year of issue 2022 is shown below.

Each limited edition gold and silver one-ounce coin is encapsulated and presented in a custom presentation case accompanied by a booklet and numbered certificate of authenticity. For more information about these coins and others available from the East India Company — Treasury of St. Helena, please click here for the gold coin and here for the silver coin.