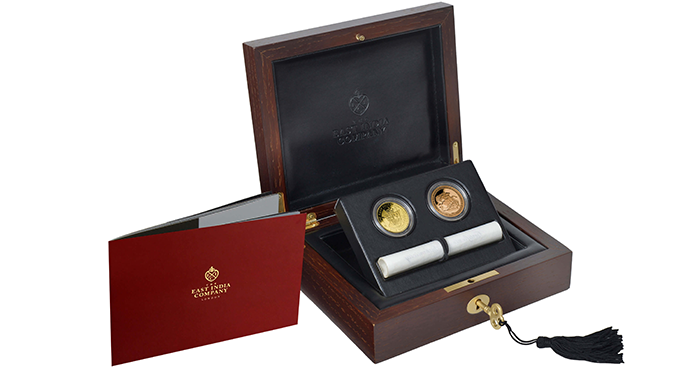 The East India Company has launched an exclusive Bicentenary Guinea and Sovereign Collection combining the two most iconic gold coins in British history and commemorating the moment of their transition during 1816–1817. These numismatic items represent the origins of the modern pound coin still used in the British economy and further afield. The unusual quarter-ounce Proof collection, struck in 22-karat gold, includes modern releases of the beautiful 2016 spade guinea (struck on the day) and the Royal Mint’s Pistrucci-designed, 2017-dated Sovereign. 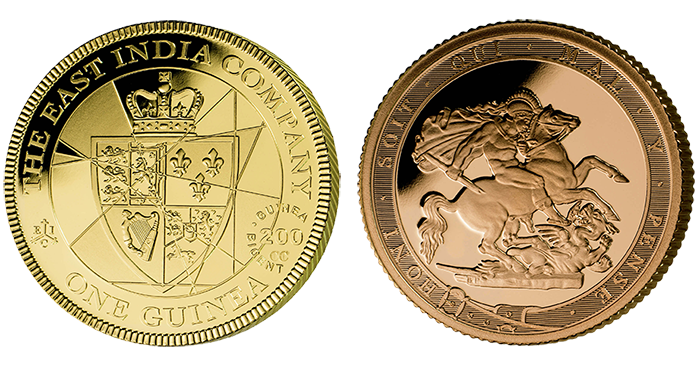 The bicentenaries of the last guinea and the introduction of the sovereign are brought together in a very special set of coins. The guinea is minted once more in its original specifications and denominated exactly as it would be had the coin survived into decimalisation: £1.05. The reverse features at its centre the most famous “spade” guinea motif as  used on the last circulating guinea, which was issued between 1787 and 1799 during the reign of King George III. The second coin is the latest, 2017-dated sovereign, minted by the Royal Mint and including the very same design depicted 200 years ago, rendered exactly as Pictrucci had envisaged his work to appear on both gold sovereigns and silver crown coins. Also included in the contemporary strike is the original “garter” emblem that surrounds Pistrucci’s famous motif, appearing for the first time since 1820. Part of the sovereign’s enduring charm and popularity is built on this iconic design, and Benedetto Pistrucci’s neo-classical interpretation of St George and the Dragon is known all over the world. 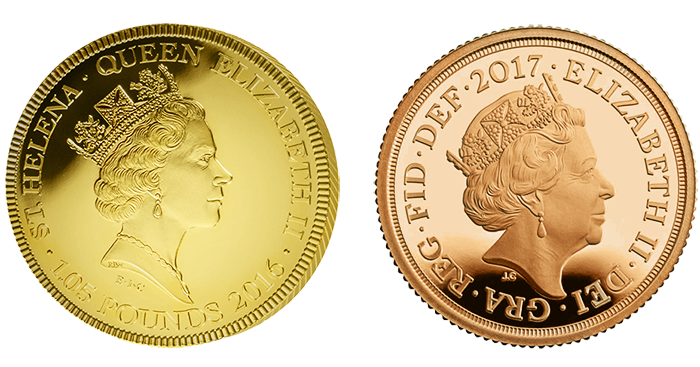 The obverse of the guinea coin includes the classic portrait of HM Queen Elizabeth II that was designed by acclaimed sculptor Raphael Maklouf and used on British coinage from 1985 to 1997; this portrait is currently used on the coins of St. Helena. The sovereign coin includes the effigy of Elizabeth II that was designed by Royal Mint graphic artist Jody Clark and used on current British coinage exclusively since 2015.

The Guinea coins are issued by the Treasury of the Government of St. Helena and were struck on the 22nd June 2016, exactly 200 years to the day since the 1816 Great Re-coinage Act and. Only 300 pieces include the “CC” mark; 100 of these pieces are included in the two-coin set. This two-coin Bicentenary Guinea and Sovereign Collection is expected to sell out very quickly, with only 100 sets available worldwide. The 2017 full sovereign has now sold out at the Royal Mint but is now available in this uniquely limited-edition, two-coin Proof set.

The two gold Proof-quality coins are presented in the East India Company luxury presentation box, accompanied by a numbered scroll of authenticity certifying the two coins and issued with a colourful and informative booklet. The set is available for purchase exclusively at the East India Company outlets. For more information, please visit their website.

The Guinea, a Reliable Mode of Trade and Commerce

With the introduction of the United Kingdom’s most secure 1-pound coin, we take a look back at a time when the need for security in the coin of the realm was as paramount as it is today—albeit for very different reasons. Whatever the reasons, meeting the need for a secure coin which maintains its reputation and integrity where the public is concerned often requires sweeping change—such as the kind we see today. The announcement by the Treasury and the Royal Mint two years ago that a new pound coin would be minted and introduced into circulation was the result of numerous counterfeits’ surfacing. After more than 30 years in circulation, the “round pound” first introduced into circulation in 1983 would be no more. The Royal Mint introduced the designs for a new 12-sided pound coin which would incorporate state-of-the-art security features and would be produced as a bi-metallic coin. The solutions and technology are available to the Royal Mint, and not unlike the circumstances previously seen on two different occasions when a significant change in coinage had very positive results. Confidence in the nation’s coinage is as pertinent now as it was on the most recent occasion of substantive change in 1816. The gold sovereign coin which was so successfully introduced 200 years ago lends its heritage and background to the modern pound coin in use today.

By the end of the reign of Henry VIII, the coinage of the realm was notoriously left in tatters due to numerous wars, overspending, and a lack of standardisation of the coins themselves. The coins in circulation were often refused in favour of bartering because so many of the coins were either drastically clipped so as to negate their actual value or the purity of the silver was often found to be so low. With the accession of Henry VIII’s youngest daughter, the Princess Elizabeth—now Queen—undertook the task of reforming the coin of her realm.

Within two years of Elizabeth’s accession, the debased money of her father and sister, Queen Mary I, had been withdrawn, melted down, and replaced with newly minted Elizabethan coins of precious metal. The queen even paid a special visit to the Royal Mint to oversee her efforts and witness the striking of her new coins. Trust was once again restored in the coin of the realm and the Treasury also saw their fortunes increased with the deposit of coins of worth.

Prior to 1663, gold coins of the realm were produced at the Royal Mint utilising the traditional technique of hand-held dies struck by a hammer. This rudimentary process often resulted in irregular shapes and weights. Hammered coins (as they have come to be called) were often subjected to clipping, an illegal practise of shaving precious metall off the edge of a coin and thus debasing or devaluing the piece. This was punishable by death as it was essentially regarded as theft—and from the Crown’s treasury, no less.

The gold guinea was first introduced in 1663 during the reign of Charles II. He instructed his Ministers to implement the introduction of a new gold coin in an effort to counter economic instability. Initially, the coin, which was not yet referred to as the “guinea,” was valued at exactly 20 shillings—equivalent to 1 pound sterling. The coin was also the result of more advanced production methods which saw a better quality coin that included a milled or reeded edge for the first time to discourage clipping. The new minting machines struck a more superior coin which noticeably resulted in a more uniformed shape and size. The machines were utilised for these new coins at the suggestion of the king himself after witnessing their use while in exile in France.

Due to the fluctuation of the price of gold in relation to the price of silver, the coin, with a weight between 8.4 and 8.5 grams of 22-karat gold and with a diameter of 25 millimetres, began to trade at a premium above its face value. A decrease of 1/10 of a gram in 1670 rectified the imbalance for a short time, but its value now increased to 22 shillings. With the intervention of Sir Issac Newton, mintmaster of the Royal Mint, stability was achieved for the coin after Great Britain formally adopted the gold standard in 1717 on his advice. He fixed the guinea’s value at 21 shillings, a rate that was retained until the coin was replaced with a 20-shilling or gold sovereign coin in 1816.

The Indomitable Rise of the Guinea

The source of the gold used for the new coin was essentially where and how the colloquial term “guinea” came about, as much of the gold used in the coin’s minting was mined from the coast of West Africa and brought to Great Britain by the Royal African Company—a mercantile company set up by the Stuart family and London merchants to trade along the west coast of Africa. The coins also included the small logo of an elephant and castle, part of the company’s crest, which denoted the gold and its source.

With these reliable, machine-struck coins gaining a reputation for purity and precise weights, the guinea was to become the foundation of Britain’s rapidly expanding international trade. Since guineas could be minted in large quantities and reliably transported, they were quickly satisfying the country’s demand for commerce both at home and abroad. Its reputation as a trusted gold coin and method of trade resulted in increased travel internationally to all corners of Great Britain’s growing empire and colonies, including those in North America and for trade in Asia. Vast quantities of gold guineas were loaded onto the East India Company’s ships and taken on a journey around the world to be traded for exotic luxuries such as spices, tea, and fine silk.

The Demise of the Guinea, the Introduction of the Sovereign

All good things, as they say, must come to an end, and the guinea was sadly no exception. Thanks to the Napoleonic Wars on the continent, Great Britain faced severe economic turmoil,  and after serving Britain and its empire for 150 years the Guinea was replaced by the lighter sovereign gold coin equal to 20 shillings. This change resulted from the country’s great re-coinage act of the 22nd June 1816, which also saw the reintroduction of silver coins into circulation for more than 30 years. The re-coinage and exchange of 1816–17 would transform the nation’s coins to a degree not seen since the days of Elizabeth I more than 250 years previously. The standard to which the coins were struck from this date was under greater scrutiny than ever before. The new sovereign introduced in 1817 was easily distinguished from its predecessor mostly due to the new design but also by the new minting method.

The lighter 20-shilling gold sovereign featured Benedetto Pistrucci’s iconic design of St. George slaying the dragon, perhaps a subtle reference to the recent wars on the continent in which Great Britain had fought and defeated Napoleon, putting an end to his desires for empire. Pistrucci’s artistic depiction was to become the highlight of designs featured on the coinage of George III. Both the guinea and new sovereign circulated alongside each other for a time after 1817, though the sovereign’s design and perfect weight and diameter were purposefully distinctive enough from existing guineas to easily distinguish one from the other.

Since the introduction of the sovereign as a practical circulating coin 200 years ago, it has endured both as a mode of commerce and more recently, as a collector’s piece and item of investment. Today, modern technology has been developed to make advancements in the security of British coinage with the recent issuing of a new 12-sided pound coin, continuing the evolution of possibly one of the world’s oldest surviving currencies. This new coin may not be minted in precious metal such as gold from all corners of the world, but making improvements to the security of a circulating coin as well as to its design and integrity is at the very heart of the guinea’s story—which continues to this day.   ❑