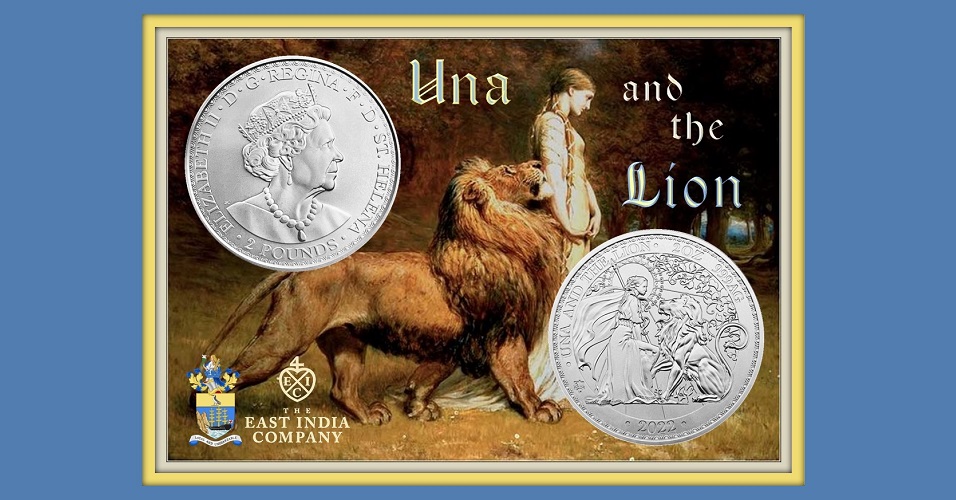 The treasury of St. Helena, in conjunction with the East India Company, has released the second design in their annual bullion quality “Una and the Lion” series. The legend of Una and the Lion dates back to the 16th century and author Edmund Spencer’s epic poem entitled The Faerie Queene, a classic work of medieval English literature believed to be an allegory and homage to the life and achievements of Queen Elizabeth I.

The 2022 reverse design of Una and the Lion has been created by designer Glyn Davies. His elegant depiction of Una and the powerful but poised lion are both seated, facing each other, staring deeply into each other’s eyes as they ponder their next move and each gaining the trust of one another. The text UNA AND THE LION is seen above the primary design along the edge with the coins’ weight and fineness with the year of issue 2022 seen below. The distinctive mintmark of the East India Company is placed just to the lower left of the border.

The coin’s obverse includes both the Commonwealth effigy of HM Queen Elizabeth II designed by engraver Jody Clark along with the authority of issue ST HELENA included in the legend and denomination of 1 POUND or 2 POUNDS shown below the Queen’s likeness.

Each one and two-ounce silver Brilliant Uncirculated strike is encapsulated and available exclusively from LPM Group Limited.