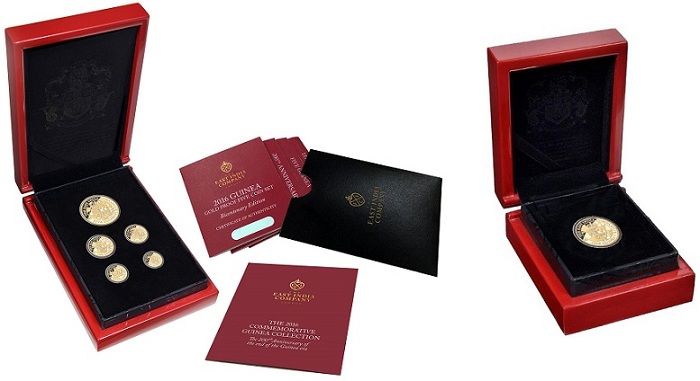 The East India Company has a unique history associated with the guinea since it sourced a significant amount of the gold used in the coins’ minting during the reigns of King George II & George III; these coins are designated with the letters EIC below the king’s portrait.

The new collection includes designs for five denominations consisting of the five, one, one-half, one-third and one-quarter Guinea coins — all minted to their previous specifications for weight, diameter, and gold fineness. Issued under the authority of the Government of St. Helena, each coin denotes a contemporary face value denomination in pounds and pence.

Of particular interest is the five-guinea coin which includes the traditional edge lettering DECUS ET TUTAMEN ANNO REGNI SEXAGESIMO QUARTO (“An ornament and a safeguard, in the 64th year of the reign”) in recognition of the 64th year of reign of HM Queen Elizabeth II. Another important “first” is the addition of the initials EIC just under the Queen’s effigy, granted by special permission from the Royal household to commemorate this bicentenary strike.

Whilst the designs are inspired by the last guinea coins to circulate as coinage in Britain, the 2016 interpretation of their designs and the quality of minting — achieved by utilizing techniques simply not possible 200 years ago — has resulted in a series of guineas unlike any minted before. 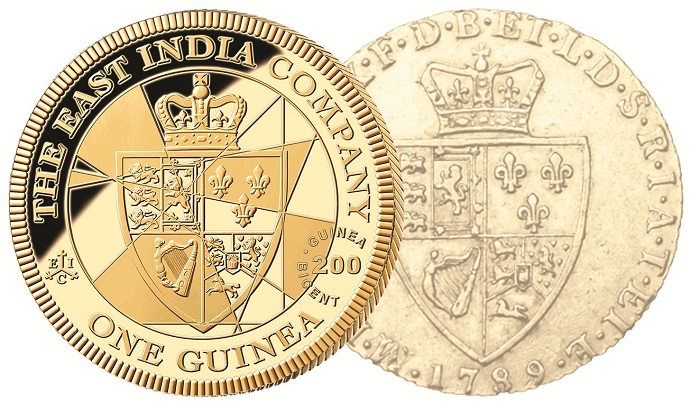 A Background of the Guinea

First introduced in 1663 during the reign of Charles II.

The gold coin was originally valued at exactly 20 shillings, equivalent to one pound sterling. However, due to the fluctuation of the price of gold in relation to the price of silver, the coin, which weighed 8.4-to-8.5 grams of 22 carat gold, began to trade at a premium above its face value. A decrease of one-tenth of a gram in 1670 rectified the imbalance for a short time, with the new coin valued at 22 shillings. With the slight decrease in gold content, the diameter of the coin remained for the most part at 25 millimeters. With the intervention of Sir Issac Newton, Mintmaster of the Royal Mint, stability was achieved for the coin after Britain adopted the gold standard in 1717. He fixed the guinea’s value at twenty-one shillings, a rate that was retained until the coin was replaced with a 20 shilling or gold sovereign coin in 1816.

The gold guinea has the distinction of being the first coin produced by the Royal Mint that utilized a machine-strike mechanism rather than the process of hand-turned screw presses, originally introduced in 1551. These minting presses were the first to be powered by steam and, although considered slightly less accurate in terms of exact or precise pieces, they were hugely successful at producing the large quantities of coins needed to satisfy domestic and international demand. Within a year of the first one-guinea coins being produced, two-guinea pieces were issued in 1668. Five-guinea pieces were produced using the same machine strike method, followed by half guineas in 1669. Third-guinea coins were minted from 1797 to 1813, and quarter-guinea coins were minted during both the reigns of George I and George III.

The Origins of the Name “Guinea”

Since the proclamation, production, and issue of the new gold coin beginning in February of 1663, it had been referred to simply as a gold coin valued at one pound. Much of the gold being used to produce the coins originated from the Royal African Company, which was chartered by royal decree in 1660 and headed by the King’s younger brother James, the Duke of York, whose primary aim was to mine the gold along the coast of Guinea in West Africa. The term “Guinea gold coin” became a common reference and eventually an unofficial denomination. The Royal African Company was also accorded the right to include their privy mark of a small elephant just under the effigy of the King, who was portrayed on the coin facing to the right. Shortly thereafter, the logo incorporated an elephant and castle, though the “castle” depicted is actually a howdah, which is a saddle or seat for riding on the back of an elephant.

Fast forward to the reign of King George II (1727 – 1760), when a significant amount of the gold used for guinea coinage was sourced through the East India Company. These coins are designated with the letters EIC below the king’s portrait. The denominations carrying the initials or privy mark EIC included the five-guinea coin of 1729, and one and one-half guinea coins minted in 1731, 1732, and 1739. The last five-guinea coin was minted for circulation in 1753.

War was raging on the European continent, beginning with the French Revolution and continuing as Napoleon’s forces fought many European powers at the time. These conflicts took their toll on the British government and the nation’s economy since it was financing countries with larger armies, such as Austria, Prussia, and Russia.

As a consequence, precious metal coins were in short supply. The legal tender status of bank notes were introduced and privately produced tokens made of copper and sometimes silver were beginning to gain acceptance in local trade. Ultimately, the shape of the economy nearing the end of the Napoleonic wars is what precipitated the start of the Great Re-coinage Act of 1816. This move sought to re-introduce a new standardized series of silver circulation coins and also introduce a gold pound coin equal to 20 shillings.

The reintroduction of standardized silver coins in England after such a long absence from common use was a welcome economic change to a public who hadn’t seen half-crown or one-crown coins for more than 65 years, as well as only two years of shilling issues under the reign of King George III. As a result of the new standardization, the Royal Mint struck nearly 40 million one-shilling coins between 1816 and 1820, 17 million half-crowns, and 1,300,000 silver crowns.

A Trusted and Familiar Coin is Relegated to History

The Legacy of the Guinea Today

The guinea is remembered for the part it played in international commerce when Great Britain was at the height of its worldwide trading empire. The coin was widely accepted and eagerly sought after as a standard of payment and exchange on all continents involved in international trade.

Interestingly enough, the “guinea” denomination is still utilized in the world of horse trading and racing, with prestigious prizes and stakes being termed in “Guineas” in the United Kingdom, Ireland, and Australia.