Between 1892 and 1954 the United States Mint issued a total of 50 different silver commemorative coins, some with multiple issues, resulting in a total of 144 different coins. Many different subjects were commemorated, but the majority, 36 out of 50, honored either a city, county, or state. This results in a total of 72% of all early silver commemoratives which can be classified by geographic location. Some honored a person but included a depiction of a building, such as the Grant Half Dollar, which are not included in this percentage. 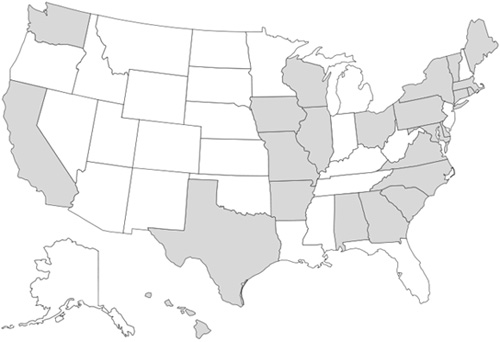 The map above displays all states which were specifically honored with commemorate silver coins, in all cases a half dollar. Looking at the map we can draw a number of interesting conclusions. First of all, virtually all of the states along the Atlantic Ocean had one or more commemoratives issued honoring a location within that state; notable exceptions are Florida, New Jersey and New Hampshire. The south is represented by Alabama and Georgia, while further north Ohio, Pennsylvania and Vermont also had commemorative coins issued. 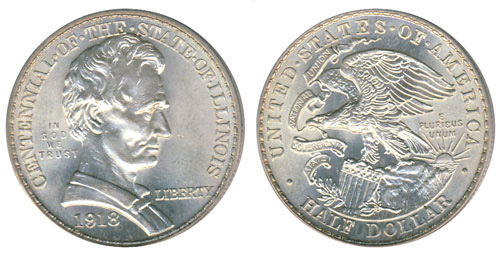 The Appalachian Mountains seem to indicate somewhat of a divide, since states like Tennessee, Kentucky and West Virginia are lacking commemoratives. The Midwest is well represented, with Wisconsin, Illinois, Iowa, Missouri and Arkansas, along with Texas. Of the states on the Great Plains as well as the Western States, only California (which had a number of commemorative coins issued honoring places in the golden state) and Washington are seen, along with Hawaii.

The map is very interesting and requires some explanation before we go into the individual coins and their designs. Why is virtually every state in the East represented, sometimes on multiple occasions? And why are virtually all the states along the Continental Divide lacking any commemoratives? First of all we have to look at the historical context of many of the commemoratives, as well as the individual histories of the various states. Settlement by non-indigenous people started in the 1500’s and 1600’s along the Eastern seaboard, in the English colonies which were concentrated in the North. The borders of the British colonial empire ran from Georgia to what now is Canada, and while it was assumed that the colonies ran all the way to the Pacific Ocean, settlement beyond a few hundred miles from the Atlantic Ocean was extremely limited. 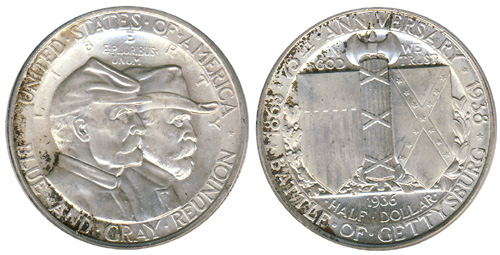 These Eastern States thus had a fairly well established history by the time that first commemorative coins were released, and especially so in the 1930’s, when the majority were issued. There was plenty of reason to issue coins: centennials, bicentennials, and tercentennials for cities, counties, and states. Many of the issues mark incorporations, and were issued by special committees appointed for these specific celebrations. Since the issuance of commemorative coins was a lucrative way of making money as well as gaining attention, we see the reason why the majority of the eastern states had a number of commemoratives issued. In addition to this, a number of commemoratives were issued to commemorate battles in the American Civil War, which was mainly fought in these eastern states.

The topics for the coins issued in commemoration of events in the Midwest share a somewhat different story. The commemorative half dollars of Wisconsin, Illinois, Iowa, Missouri and Arkansas all have the same characteristic: they were issued in conjunction with the centennial of statehood, or recognition as territory, as these states were all admitted to the union between the 1810’s and 1840’s. The centennial, perhaps by pure coincidence, occurred at the time when many different commemorative coins were issued. Here we also have the reason why the states between this batch and those along the Atlantic Ocean are lacking: They simply did not have the right events to commemorate at the right time. If the era of commemorative coins had begun a few decades earlier it is likely that these States would be covered as well, but by the time the issuance of commemorative coins became popular it was already too late for them.

We then have the states further west, like Kansas, Nebraska, Colorado and Nevada. In part the same reason applies here: There was not much to commemorate. The difference is that the commemorative series did not start too late, it ended too early. With the exception of California and Oregon these states did not achieve statehood until the mid to late 19th century. Even though settlement had begun at an earlier point in time, the Great Plains did not increase heavily in population until the 1920’s and 1930’s, which happens to be the time when most commemorative coins were issued. Even at this time this part of the United States does not have the population density that the states along the East and West coast have. At the time, people were busier surviving (mostly on farming) than to worry with commemorative events and the issuance of half dollars. If not, we might have seen a commemorative issued in conjunction with the 75th anniversary of Kansas Statehood, in 1936.

As mentioned, California, which joined the Union in 1850, had a variety of different commemoratives issued. The state, after the discovery of gold, quickly became important and a mass migration occurred. In addition, the state appeared to make the right use of commemoratives, issuing them for events such like the San-Francisco – Oakland Bay Bridge, the only early commemorative issued in honor of a technological accomplishment. Oregon, while not directly featured, did saw an indirect commemoration in the form of the Oregon Trail. Washington had a commemorative issued as well, as did the island state of Hawaii which, at the time, was only a territory and not yet a state.

Commemorative coins (and the lack thereof) put in a historical context provides the collector with an interesting point of view on the different historical events and its commemorations that shaped the first decades of the 20th century. The coins tell the story of America, from initial settlement to engineering feats. If issued at a different point in time the events commemorated would be different, and the map drawn above would look different as well.