The Finnish Ministry of Finance has announced (30th August) that a commemorative €2 coin will be issued on the 17th October which marks the 200th anniversary of the founding of the Country’s Central Bank. The 200-year-old Bank of Finland’s roots are in the “Waihetus- Laina- ja Depositioni-Contori” (‘Exchange, Lending and Deposits Bureau’) which which was established in the former capital city of Turku in 1811 by Imperial decree of Russian Tsar Alexander I. 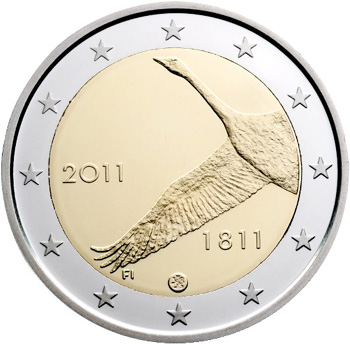 Struck by the Mint of Finland in Vaantaa, the obverse of the coin, designed by well-known coin artist Hannu Veijalainen, depicts an alternative version of the Finnish swan in flight along with the commemorative years “2011” to the left of the main design and “1811” on the right of the swan. The Finnish swan is also depicted on the one euro circulation coin.

The €2 commemorative coins will be available as UNC examples and will be released into general circulation, they will be available in 10-coin purses and in packages that include 5 coin rolls. The proof coin set will be released on 1 November. It is expected that the latest €2 bi-metalic commemorative coin will have a mintage of between 1.5 and 2.5 million units. The coin can be ordered directly from the Mint of Finland.

For more information on this and other coins produced by the Mint of Finland, please visit their website at: http://www.suomenrahapaja.fi/eng