If there is anything in the world that puts the BCD collection of ancient Greek coins in the shade, it is the BCD library, which is by far the largest privately owned library on Greek numismatics that ever existed. The collector, who has been documenting every written remark about Greek numismatics for several decades and who gladly makes this treasure of knowledge accessible to interested academics, has now entrusted the young company Auctiones GmbH with auctioning some intriguing duplicates in their eAuction 28. As of 16 June 2014, all 227 lots can be viewed online, at www.auctiones.ch, and it is also possible to place pre-bids. The actual electronic auction will start on 29 June at 7 p.m. sharp.

As is to be expected of a bibliomaniac like BCD, among the duplicates the expert discovers any number of very interesting rarities, items highly useful and important, with publication dates as early as the 19th century until today. Not surprisingly, the focus is on the ancient period (Greeks, Celts, Romans, Byzantines) but nevertheless, there are some interesting publications available that deal with medieval and modern coins and medals. The range covers a larger number of languages because BCD collected virtually everything published related to the topic. Hence, it contains many English publications but likewise German, Italian, French, Russian and Greek ones, not to forget such language exotics like Rumanian and Hungarian. The offer comprises die studies, monographs, collections of essays, coffee-table books, offprints, and auction sale catalogs, that all have one thing in common: there is something special connected with them. 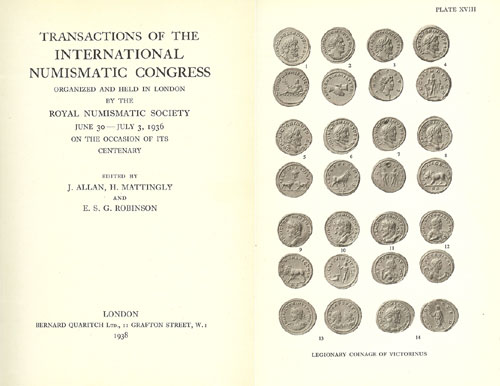 Let us take, for example, lot 7, the Transactions of the International Numismatic Congress held in London in 1936. The copy available here, offered for CHF 30 – although no book lover will seriously expect to get the book for as low a price – was once owned by the famous numismatist Willy Schwabacher who, in the year of the congress, had just been barred from the DAI excavations in the Kerameikos in Athens because of his Jewish extraction. When the transactions of the congress were published in London in 1938, Schwabacher also happened to be at London where he had been able to flee to. He continued his career first in Copenhagen, then after another flight in Stockholm as friend of Gustav VI Adolph, King of Sweden, who not only had a great interest in archaeology but also collected coins. Thus, these transactions tell us their own story in addition to the academic articles it contains. And that is something. BCD who – and everybody who owns the catalogs of his coin collection can vouch for the truth of that – never abstains from voicing his sincere opinion, describes the contents as follows: “Apart from Sir George Macdonald’s Presidential Address on what was then the last Fifty years of Greek Numismatics”, [contains this book] the kind of articles that can only produce a feeling of despair when one compares “then” with “now”; there are many more interesting and useful scholarly contributions on practically every branch of numismatics, including medals.” 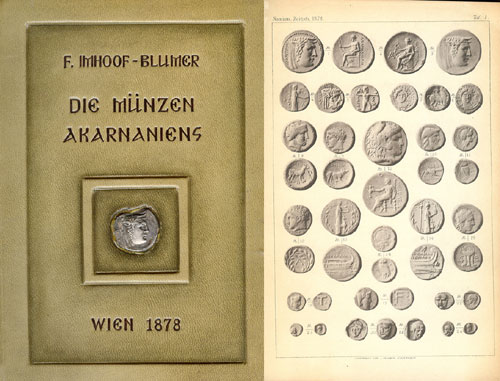 Another impressive bibliophilic rarity is an edition of the sought-after monograph written by Friedrich Imhoof-Blumer on the coins of Acarnania from 1878, which the former owner made unique by its binding: there is an original stater from Acarnania depicting the bull-headed Acheloos on its obverse embedded into the leather-bound cover.

Or just think of the immense oeuvre of unforgotten Leo Mildenberg who is represented by a couple of very special testimonies of which the lion’s share has been widely unknown so far: cases in point are a magnificently written article on Greek fractions from 1964 or the catalog of an exhibition of the Zurich Museum of Arts and Crafts from 1949 behind which Leo Mildenberg was the driving force. 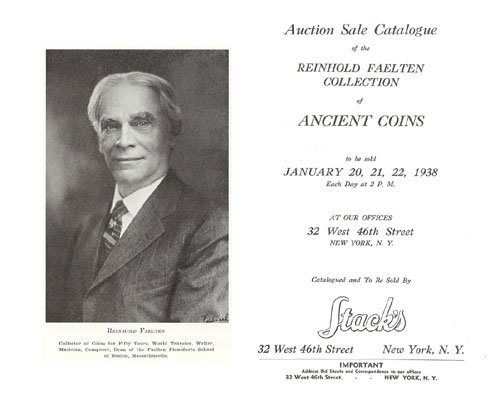 So much more could be said about all the books offered for sale in this auction. Anyone not just fond of coins but likewise of books will find something to his liking in eAuction 28 of Auctiones GmbH, something that is going to enrich his library and that will make his eyes sparkle with joy.