The Royal Mint have announced that a special double sovereign will be issued to mark the first birthday of the UK’s youngest Prince who is in direct succession to the British throne.

Little Prince George, the son of the Duke & Duchess of Cambridge, also known as William & Catherine, was born on the 22nd July to a throng of waiting media from around the world and an eagerly awaiting British public who celebrated his arrival. Prince George is also the grandson of Charles, Prince of Wales and if that wasn’t enough to raise eyebrows, he’s the great-grandson of HM Queen Elizabeth II – who has been the British head of state for sixty two years.

It was reported that Prince George celebrated his first birthday at home with his parents and immediate extended family with a birthday cake made by his mother and some presents to open – like any other one-year old! 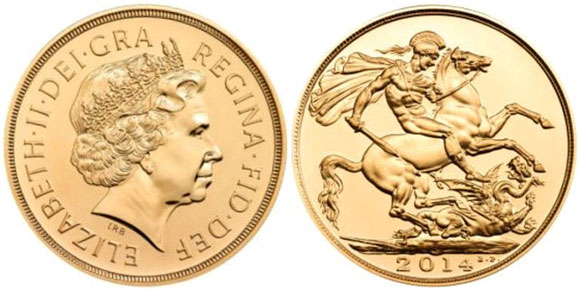 The coin appropriately bears the famous St George and the dragon design on the reverse, which was created almost 200 years ago by renowned engraver Benedetto Pistrucci. The obverse includes the current profile of the Queen which was first introduced on British & commonwealth coinage in 1998, it is the work of the distinguished artist Ian Rank-Broadley.

The coin is available as a single coin struck to Brilliant Uncirculated standard. During the month of June the Royal Mint also issued a silver crown displaying the heraldic Royal Arms design in honor of the first birthday of Prince George, which sold out within weeks – along with 400 Brilliant Uncirculated 22 carat gold Sovereigns struck especially for the occasion.

For information or to order this and other coins related to the first birthday of Price George, please visit this section of the Royal Mint website. Information offered in English – international orders dispatched.