The second release within a two year program of Disney collectible coins features the beloved animated character Donald Duck. The coin is issued to celebrate the 80th anniversary of the character’s debut film appearance in The Wise Little Hen.

Released on June 9, 1934, the film was based on the fairy tale The Little Red Hen. Donald Duck and Peter Pig try  to avoid doing work by faking stomach aches until the Wise Little Hen teaches them a lesson. In the film, Donald wears his trademark sailor’s shirt, cap, and bow tie, while communicating in his quacking style of speech as voiced by Clarence Nash.

Throughout the following decades, Donald Duck was nominated for seven Academy Awards and won an Oscar in 1943. Donald’s partner Daisy, his uncle Scrooge McDuck, and his three nephews Huey, Dewey, & Louie, often feature in cartoons alongside him. 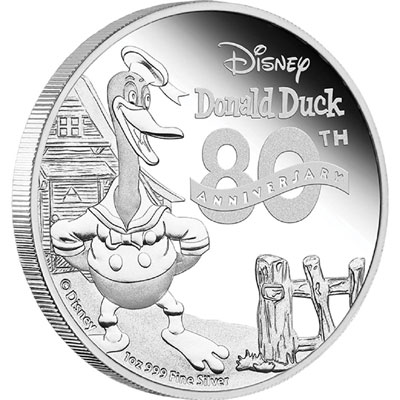 The reverse design of the coin features an image of Donald Duck from his debut appearance in The Wise Little Hen with the house and fence from the cartoon forming part of the background. The words “Donald Duck 80th Anniversary” appear in the field with the Disney logo. Additional inscriptions along the base read “1 oz 999 Fine Silver” and “©Disney” as an officially licensed product.

The obverse of the coin features the Ian Rank-Broadley effigy of Queen Elizabeth II with the “2014” date and monetary denomination. The coins are struck by the Perth Mint and issued by the New Zealand Mint as legal tender of the South Pacific island nation of Niue.

For additional information or to place an order for the Disney Collectible Coins, please visit the Perth Mint website.