The Dolley Madison Commemorative Coin Program was authorized under Public Law 104-329 to celebrate the life and achievements of the First Lady, as well as to commemorate the 150th anniversary of her death. Representing an unusual departure from tradition, the obverse and reverse designs for the silver dollars were created by a well known for-profit private sector firm, namely Tiffany & Co.

The authorizing legislation for the program provided only basic guidance on the designs for the Dolley Madison Silver Dollar, stating: “The design of the coins minted under this paragraph shall be emblematic of the 150th anniversary of the death of Dolley Madison and the life and achievements of the wife of the fourth President of the United States.” 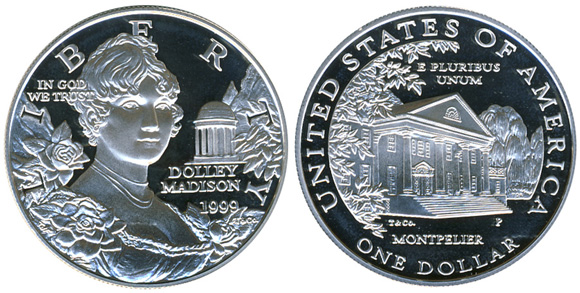 The obverse design features a portrait of Dolley Madison surrounded by her favorite flowers, Cape Jasmine gardenias. In the background, the domed portico over the ice house at the Madison estate appears. Inscriptions include “Liberty”, “In God We Trust”, “Dolley Madison”, and the date “1999”.

The reverse design depicts the front portico of Montpelier, accentuated by foliage and willows. The inscriptions “United States of America”, and “One Dollar” encircle the design, while “E Pluribus Unum” and “Monpelier” appear within.

Both the obverse and reverse designs incorporate the logotype “T & Co.” which some have considered a display of private advertising on coinage.

The artists who created the designs at Tiffany & Co. remained uncredited. However, the certificate of authenticity and other promotional materials for the coins did provide credit to United States Mint Sculptor/Engravers T. James Ferrell and Thomas D. Rogers who were responsible for translating the design art into three dimensional sculpture from which the dies were created. 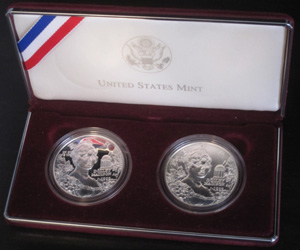 The 1999 Dolley Madison Silver Dollars were available from the United States Mint individually in proof or uncirculated versions, or as a two coin set. Final mintages for the coins reached 89,104 uncirculated and 224,403 proof coins, for a total of 313,507 out of the 500,000 maximum authorized mintage. The overall sales represented the highest total for a commemorative silver dollar since 1995.