The film is considered to be the debut of Mickey Mouse, who would become one of the world’s most popular cartoon characters. It is also notable for being the first cartoon with synchronized sound and the first to feature a post-produced soundtrack. In 1994, Steamboat Willie was voted the thirteenth greatest cartoon of all time and selected for preservation in the United States National Film Registry 1998, being deemed culturally, historically, and aesthetically significant. 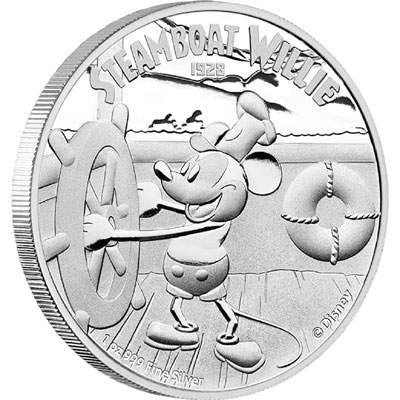 The reverse design of the coin features a sculpted representation of Mickey Mouse at the wheel of his handcrafted ship. The words “Steamboat Willie” and “1928” appear above. Along the base is the inscription “1 oz 999 Fine Silver” and “©Disney” as an officially licensed product.

The obverse carries the Ian Rank-Broadley effigy of Queen Elizabeth II with the “2014” date and the monetary denomination. The coins are struck by the Perth Mint and issued by the New Zealand Mint as legal tender of the South Pacific island nation of Niue.

Each coin is struck in 1 troy ounce of 99.9% pure silver to proof quality with a diameter of 40.60 mm. The maximum mintage for the silver coins is 10,000 pieces. A 1/4 oz gold proof coin featuring the same design is also available with a limited mintage of 1,000 pieces.

The gold and silver coins represent the first releases in a two year program which will feature representations of Disney’s most beloved characters. For additional information or to place an order, please visit the Perth Mint product page.