In an earlier Coingrader Capsule, “Genuinely Concerned about PCGS,” we covered what appeared to be an increasing number of grade-worthy coins being returned in “Genuine” no-grade holders.

PCGS uses a numerical code for no-grade coins that may have been cleaned, tooled, doctored, artificially colored, scratched or otherwise flawed. The company’s rival, NGC, also holders no-grade coins under its “Details” label, specifying the condition as well as the coin’s grade. 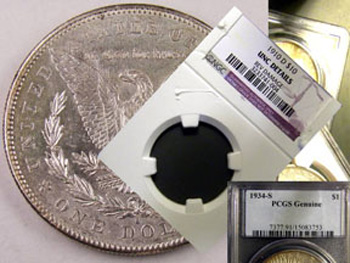 A cleaned coin in a PCGS Genuine holder would carry the code 92 on the label. NGC would label the coin “cleaned” and assign a grade, such as “UNC DETAILS: OBV Improperly Cleaned.”

Both companies also provide detailed population reports on the number of coins assigned a specific grade; however, they do not include the number of Genuine or Details labels assigned to specific types, varieties and mints—and they should.

Some hobbyists and coin dealers suspect that the major grading companies assign too many no-grade labels. To be sure, many such coins have been cleaned, re-colored, scratched or even tooled. But some are borderline. On a good day, they earn a grade. On a bad one, they do not.

Borderline coins include ones with “slide marks” caused by Dansco and similar albums leaving lines on otherwise beautiful coins from repeated contact of the plastic strip being removed and re-inserted over coin holes. (We covered slide marks and how to spot them in a previous post.)

In the first eight months of 2010, 26% of raw coins I submitted to PCGS were returned in Genuine holders. That’s about 1 in 4.

To earn that new percentage, I ceased submitting coins with slide marks, no matter how strong the strike or lovely the luster.

I just wanted to test if slide marks were at the root of some no-grade labels. My data are not comprehensive, of course; but they point to a reason that may be helpful to other hobbyists. To increase your slabbing percentage, don’t submit coins with slide marks.

That aside, we can debate the subjectivity of grading, the different standards of companies, the controversial methods of dipping, and the damage caused by improperly stored coins. We can argue against my perception that PCGS is assigning no-grade labels to coins with evidence of slide marks.

However, it is difficult to argue against including Genuine and Details data in population reports. If companies do not archive those data, they can begin doing so.

Those figures not only may verify or refute suspicions that we are receiving too many no-grade labels; they would also be useful in understanding what types and years most frequently earn such designations.

Moreover, if questionable authenticity numbers also were shared, we would be able to see counterfeit trends associated with types, mint marks and series.

Those are valuable data. After all, we’re underwriting no-grade labels with our submissions and deserve to know the information.