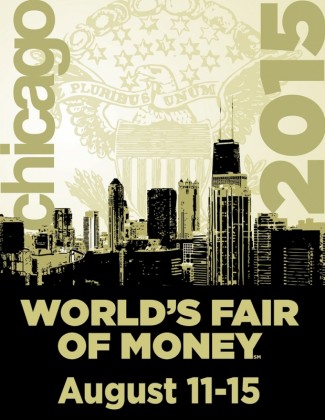 I must go back in time a little to complete my thoughts on the Chicago World’s Fair of Money, as I had not yet reported on the ANA banquet when I last “signed off.” The banquet was wonderful, with plenty of good conversation, good food, and good camaraderie, as well as the very solemn and heart-felt inductions of the new ANA president, Jeff Garrett, and the new Board of Governors. Ken Bressett, in a smashing cream suit and red tie, very earnestly made all new leaders aware of their roles–to guide, to lead, to be examples, to educate and welcome all numismatists, old and young–before warmly welcoming them. Of course, the dinner was well-balanced between solemnity and humor, with much wry commentary and amusement occurring during the award-giving. I left the evening’s festivities feeling, yet again, a part of a large family reunion, and I was a touch melancholy to think that on the next day I would have to say farewell to old and new friends alike. 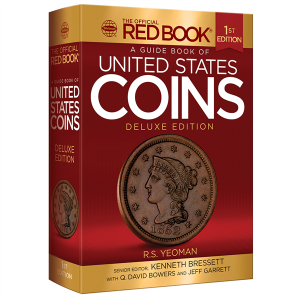 The next morning saw a flurry of activity, with a good breakfast among friends as well as preparing for the Chicago Coin Club‘s general meeting, where Whitman publisher Dennis Tucker presented the new Deluxe Edition of the Red Book — a 6 and a half pound behemoth that has been referred to fondly as “Mega Red” and even “the monster.” The overall response received upon seeing the new Deluxe Edition has been an awed and enthusiastic “Wow!” and it goes without saying that it is a truly beautiful and intense book. Dennis went over some of the thoughts that had gone into the creation of the Deluxe Edition, answered questions from collectors about what could come next with each year’s edition, and also encouraged the members (as well as all numismatists) to reach out to Whitman Publishing at any time to tell us what it is they’d like to see in the Red Book in years to come. A couple of copies were raffled away, and the meeting was adjourned.

After that, it was merely a matter of making our way to the airport, getting on a plane, and making our way back home, exhausted but invigorated after a week of education and excitement. I survived my first Chicago ANA with soaring results, and I could not be happier that I made the journey to join the numismatic community in Rosemont, Illinois.