The Treasury of the Government of the Isle of Man have launched (5th April) a very special and first for the numismatic community, that of two diamond shaped coins which mark the 60th year of reign or Diamond Jubilee of Queen Elizabeth II.

Produced by the Pobjoy Mint in the UK, these special coins are exceptionally unique as the silver version of one half ounce and gold 1/10th ounce have been produced in the shape of a Diamond gem stone to mark this once-in-a-lifetime royal achievement.  The reverse design of the silver coin features the Royal Cypher, which includes St. Edward’s Crown, the crown that was placed upon Her Majesty’s head at the Coronation in 1953. In the middle of the crown, a cut and polished diamond has been inset 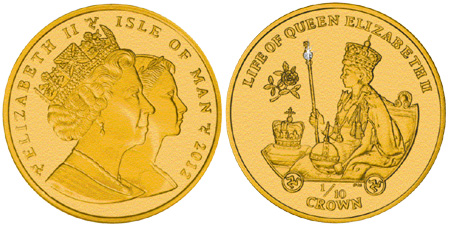 The reverse design of the gold version, a 1/10th ounce, (round shape pictured) features an image of Her Majesty at her Coronation shown with the Crown Jewels, including the Royal Sceptre and Orb. A genuine diamond has been inset at the very top of the Queen’s sceptre which she is portrayed holding.

The coins are presented in a stunning black framed ‘window’ box which enables viewing from both sides. In honor of the Queen’s Diamond Jubilee, both coins depict a unique double effigy that has been produced especially for this year showing a portrait of Her Majesty as she appears on current coins alongside a portrait as she appeared on the coins at the start of her Reign.

For more information on these and other coins produced by the Pobjoy Mint, please visit their website at: http://www.pobjoy.com/ukworld/section.php/815/0