The America the Beautiful Quarters Program was launched in 2010 and has featured five different designs annually depicting national parks or sites. The series is scheduled to continue until 2021, with one site featured for each state, U.S. territory, and the District of Columbia in the order federally designated. 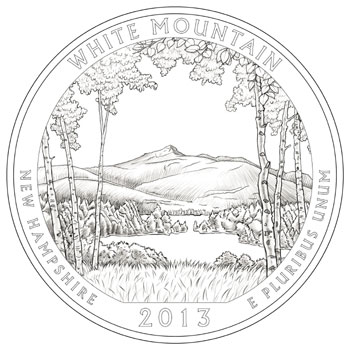 The reverse design for the 2013 White Mountain National Forest Quarter depicts Mt. Chocorua, the easternmost peak of the Sandwich Range, framed by birch trees. Inscriptions include “White Mountain”, “New Hampshire”, “2013”, and “E Pluribus Unum”. The reverse was designed and sculpted by Phebe Hemphill. 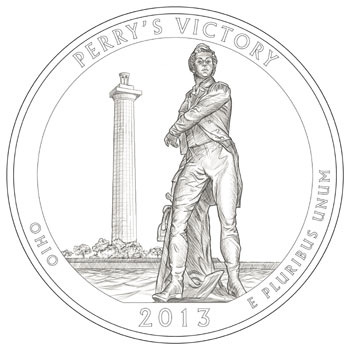 The 2013 Perry’s Victory Quarter depicts the statue of Master Commandant Oliver Hazard Perry with the Peace Memorial shown in the distance. The memorial is one of the tallest of its kind in the United States. Inscriptions read “Perry’s Victory”, “Ohio”, “2013”, and “E Pluribus Unum”. The reverse was designed and sculpted by Don Everhart. 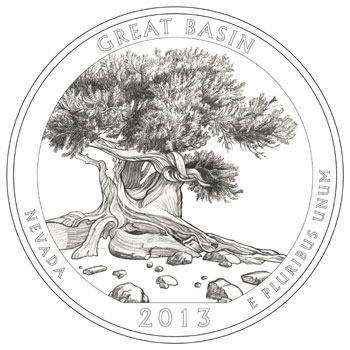 The reverse of the 2013 Great Basin National Park Quarter features a single Bristlecone Pine tree and the rocky glacial moraines where the trees grow. The Bristlecone Pine trees grow at higher elevation in the park and are some of the world’s oldest, with some older than 4,000 years. The inscriptions read “Great Basin”, “Nevada”, “2013”, and “E Pluribus Unum”. The reverse was designed by Ronald D. Sanders and sculpted by Renata Gordon. 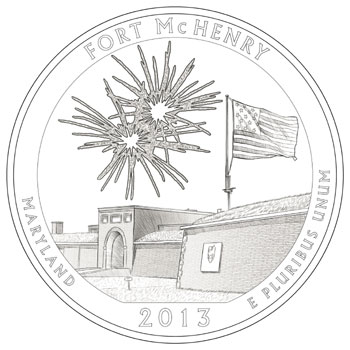 A representation of the site during the “Defender’s Day” celebration is featured on the reverse of the 2013 Fort McHenry Quarter. This celebration is the centerpiece of the annual event held at Fort McHenry with the fireworks symbolizing the “rocket’s red glare” and linking the fort to its historic past. The inscriptions read “Fort McHenry”, “Maryland”, “2013”, and “E Pluribus Unum”.  The reverse was designed and sculpted by Joseph Menna. 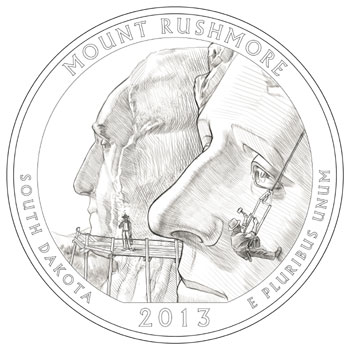 The reverse design of the 2013 Mount Rushmore Quarter was inspired by photos of men who were adding the final details to Thomas Jefferson’s face. The design offers a unique perspective on how Mount Rushmore was created and sculpted, which differs from previous representations of the site found on the 1991 Commemorative Coins and the 2006 South Dakota State Quarter. The inscriptions read “Mount Rushmore”, “South Dakota”, “2013”, and “E Pluribus Unum”. The reverse was designed and sculpted by Joseph Menna.

Each of the reverse designs described above were selected by the Secretary of the Treasury. His selection followed review by the Secretary of the Interior, the chief executive of the host jurisdiction, the Commission of Fine Arts (CFA), and the Citizens Coinage Advisory Committee (CCAC). The obverse of each coin will feature the 1932 portrait of George Washington designed by John Flanagan.