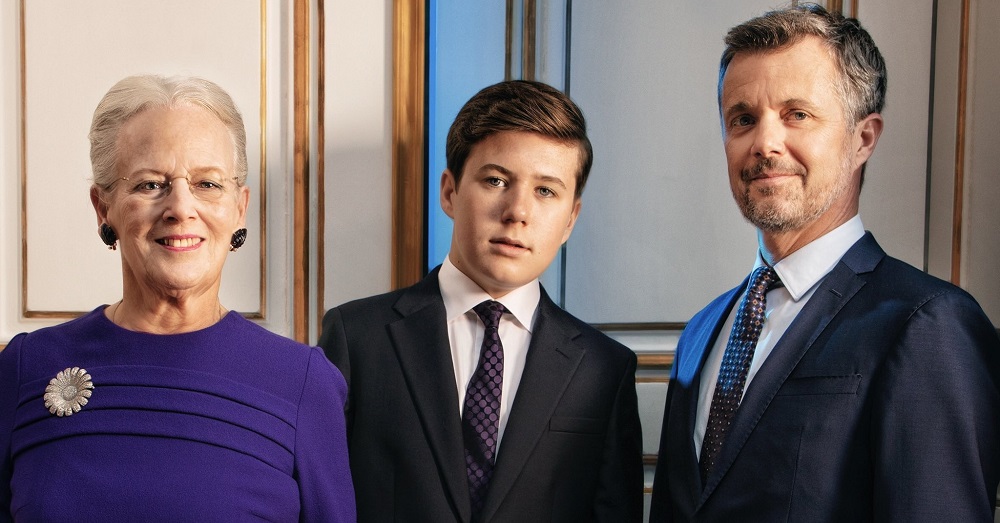 The National Bank of Denmark has issued (16th April) new commemorative coins in celebration of the country’s crowned head of State, HM Queen Margrethe II, who was born in April 1940. As the eldest daughter of King Frederik IX, she succeeded him on the 14th January 1972, and the 31-year-old Princess was proclaimed HM Queen Margrethe II of Denmark, the Faeroe Islands, and Greenland. This release is the fifth such coin issued to commemorate the Queen’s birthday; the first coin was released in 1990 to mark her 50th birthday, successive coins were issued in 2000, 2010, and 2015.

Margrethe Alexandrine Thorhildur Ingrid, princess of Denmark, was born on the 16th April 1940 to Crown Prince Frederik and Crown Princess Ingrid, born a princess of Sweden. The little princess was born just seven days after the Nazi Army invaded Denmark, thus beginning an occupation of the small Scandinavian country which would last five years (the duration of the war). Unlike many European sovereigns and heads of state whose countries had been invaded, many of whom formed governments in exile, but the Danish royal family remained. The little princess’s grandfather, King Christian X (reigned 1911 to 1947), and her father, Crown Prince Frederik, became the focus of resistance for Danes during the war. When her father succeeded to the throne in 1947 as Frederik IX (1899–1972), it was his younger brother who was designated his heir as the new king had no sons. Having no brothers, the Danish constitution was amended in 1953 by public plebiscite giving the-then Princess Margrethe the designation of Heiress Presumptive and the right to succeed her father on the occasion of his abdication of demise. She succeeded her father unexpectedly on the 14th January 1972 and was proclaimed Queen Margrethe II from the balcony of Christiansborg Palace, the following day of the death of her father, by the then prime minister. At present, Queen Margrethe II is now the longest-reigning Scandinavian monarch with Sweden’s King Carl XVI Gustav, reigning from 1973, and King Harald V, who succeeded to the Norwegian throne in 1991. She is also Europe’s second longest-reigning monarch after Britain’s Queen Elizabeth II. Before her accession, Princess Margrethe married Count Henri de Laborde de Monpezat (1934–2018), a diplomat in the French Foreign Affairs Ministry, who worked as a secretary at the French embassy in London from 1963 until his marriage in 1967. The couple has two children, Crown Prince Frederik, born in 1968, and Prince Joachim, born in 1969. Presently, the succession of the Danish throne includes her eldest son and heir, 51-year-old Crown Prince Frederik, and his eldest son, Prince Christian, born in 2005. 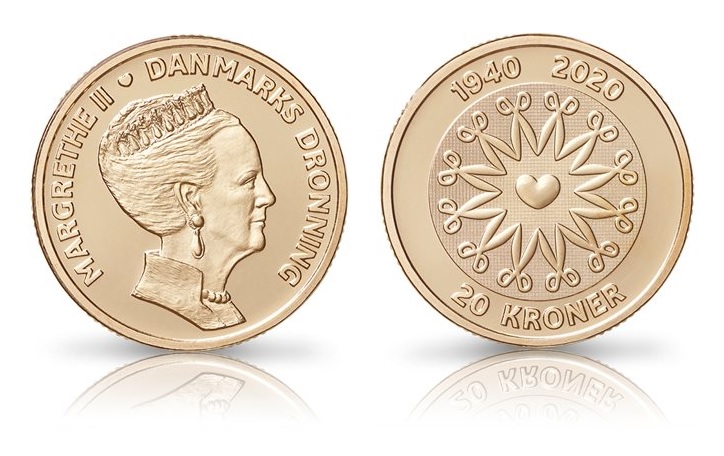 The Mint of Finland produces the coins at their facilities in Vantaa under license by the Royal Danish Mint, on behalf of the National Bank. The obverse side is designed by sculptor Lis Nigel, whose new commemorative effigy depicts the Queen in profile, facing right. Along the rim is the inscription ‘MARGRETHE II DANMARKS DRONNING’ (“Margrethe II Queen of Denmark”) and a heart mintmark, the mark of the Royal Danish Mint. The reverse shows a motif based on symbols referring to the Queen’s motto adopted at the time of her accession and her artistic work. 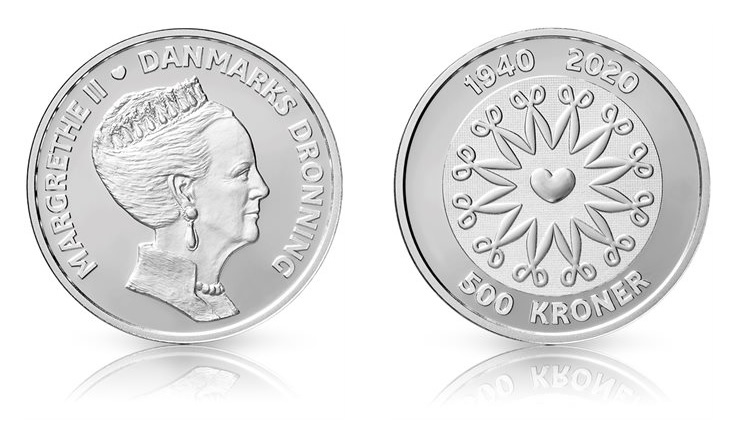 The primary reverse design, created by the graphic designer Jeanette Skov Jensen, depicts a heart encircled by 12 pairs of scissors. The motto is reflected in the heart that symbolises the people’s love and in the circle that symbolises Denmark’s strength. The scissor blades form the letter “M” (for Margrethe) and the circle represents the people’s unity. Above the primary design are the commemorative years 1940 and 2020 with the face value of the silver coins, 500 KRONER, placed below. 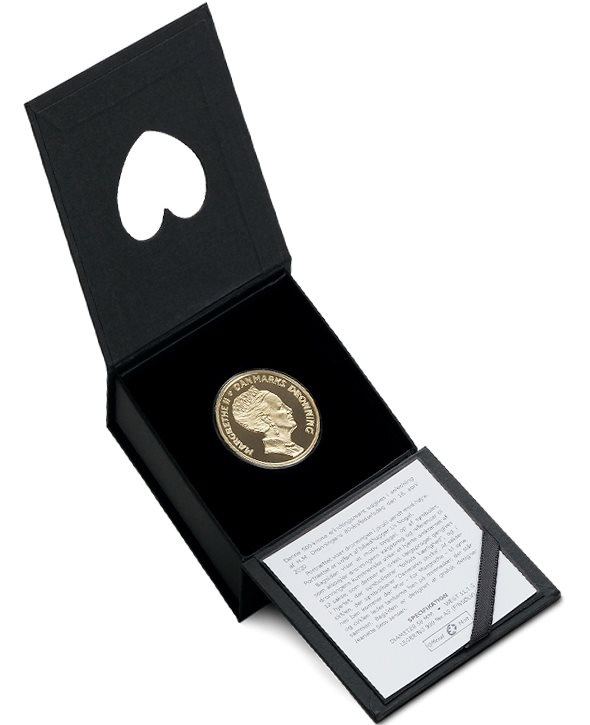 The coins, available in pure silver Proof quality and aluminium-bronze Proof are encapsulated and presented in a plastic case, each accompanied by a certificate of authenticity. 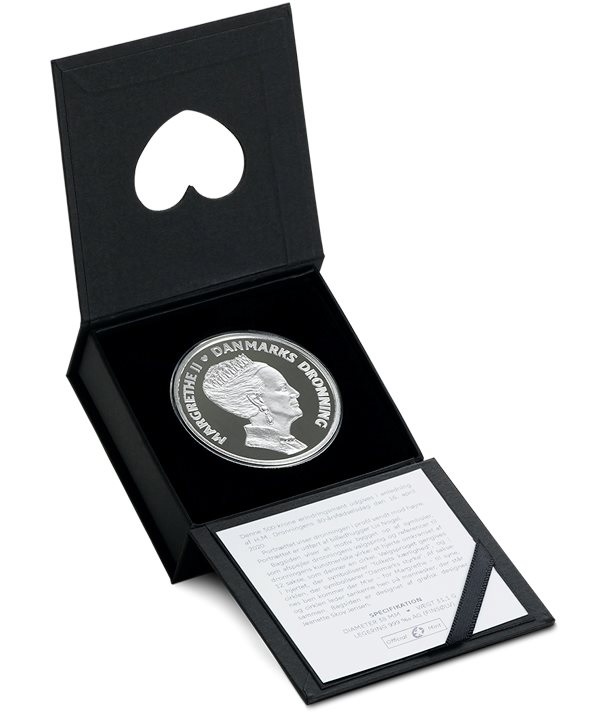 The Uncirculated quality coins will be released into circulation and may be obtained in rolls of 20 pieces. All options can be purchased directly from the retail department of the Royal Danish Mint. For additional information, please visit their website.