Public Law 110-456 authorized the United States Mint to produce bullion coins struck in five troy ounces of .999 fine silver with a diameter of three inches. The coins carry the same designs as the America the Beautiful Quarters, which feature national parks or sites from each state, territory, and the District of Columbia. 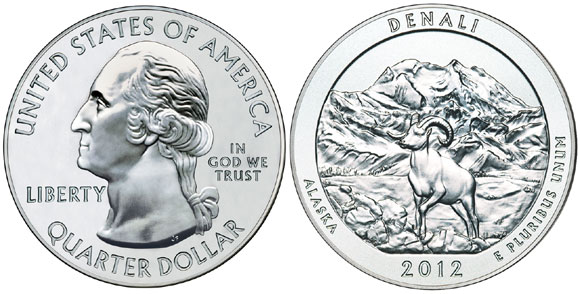 The Denali National Park Five Ounce Silver Bullion Coin represents the fifteenth coin within the series. The reverse design depicts a Dall sheep with Mount McKinley rising in the background. This was designed by Susan Gamble and engraved by Jim Licaretz. The obverse of the coin features the portrait of George Washington designed by John Flanagan for the 1932 Washington Quarter. The edge of each coin includes inscriptions indicating the bullion weight and fineness of the coin.

As with other bullion products, the US Mint distributes the America the Beautiful Silver Bullion Coins through a network of authorized purchasers. They are able to place bulk orders for a minimum of 10,000 ounces worth of silver, with the purchase price based on the market price of silver plus a mark up of $9.75 per coin. The authorized purchasers then distribute the coins to other bullion dealers, coin dealers, and the general public as well as facilitate a two way market for the coins.

As of October 23, authorized purchasers have placed orders for 5,500 of the Denali National Park Silver Bullion Coins, accounting for 27,500 troy ounces of silver. The most recent sales figures for each 2012-dated release of the series are shown below.

Sales of the new bullion series have lagged far behind the levels seen for the American Silver Eagle bullion coins, which have been offered since 1986. Based on the most figures, the US Mint has recorded sales of 75,800 of the 2012-dated America the Beautiful bullion coins accounting for 379,000 troy ounces of silver. By comparison, sales of the one ounce American Silver Eagles have reached 28,379,000 for the year to date.

In addition to the bullion versions of the ATB Five Ounce Silver Coins, the US Mint also offers numismatic versions with a special finish and the “P” mint mark. The numismatic version for the Denali National Park design is scheduled for release on November 5, 2012.