Do you know your Cameos from Mirrors?

Cameos have to do with proofs, and Mirrors with mint state. Cameos are an especially important condition with Franklin Half Dollars, and mirrors with Morgan dollars. So let’s use those denominations as examples and acquaint ourselves with how the top grading companies distinguish their various designations–Cameo Proof, Deep/Ultra Cameo Proof and Deep Mirror Prooflike.

Of the two sets of designations, Prooflike and Deep Mirror rely less on numismatic experience and subjectivity. That’s because both conditions can be tested according to set standards. 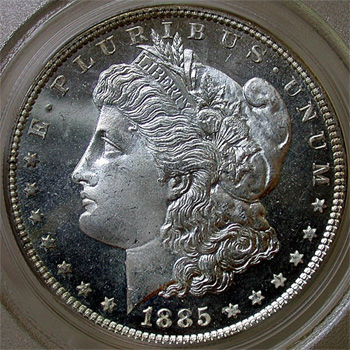 For instance, PCGS notes that Prooflike Morgan dollars require “clear reflection in the fields on both sides from 2-4 inches away.” The company states that a hazy effect or streaks may impede the reflectivity, generally indicating a semi-prooflike condition (which does not appear on the PCGS label).

Morgan dollars designated as Deep Mirror Prooflike, or “DMPL” according to PCGS (NGC uses “DPL”), must possess clear reflection in the fields on both sides of the coin from at least 6 inches away. And the reflectivity must be undistorted on both the obverse and reverse. 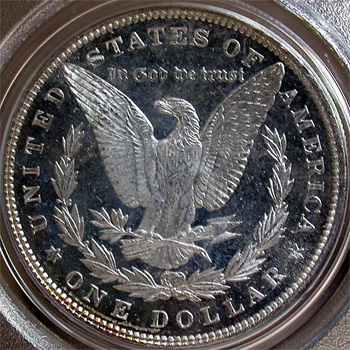 To test for deep mirror, I put the coin on a flat surface with a propped-up adjacent ruler and then hold a business card with 14-point type above the coin, gradually lifting it higher to see if I can still read the print at 6 inches.

Technically, devices on Morgan dollars do not need to be frosted; the “DMPL” designation is all about the mirror, not the frost. But almost all of the MS63DMPLs and MS64DMPLs and above usually have frosted devices as an indication of a fresh, clean strike.

Frost, however, is requisite in Cameo and Deep/Ultra Cameo designations, especially in the Franklin half series. The obverse and reverse must possess frosted devices that create a white/black contrast in the right lighting. 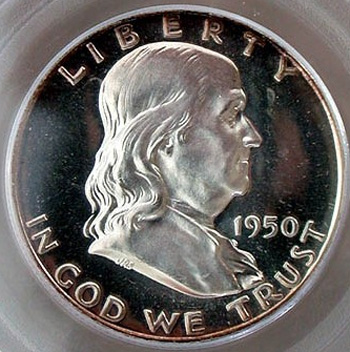 For the Cameo designation, PCGS notes that “frostiness” may be heavier on some devices than on others. “A coin that exhibits Deep Cameo attributes on one side and Cameo attributes on the other side is considered only a Cameo,” the company states on this help page.

Conversely, for the much coveted “Deep Cameo Proof” designation, devices have to be frosted on both the obverse and the reverse with even, heavy contrast.

(Aside: In my work for the Citizens Coinage Advisory Committee, I have recommended the Cameo and Deep Cameo effect as an element of design depicting a night-time scene; sharp “black/white” contrast is a nifty way to create that effect.)

David W. Lange, NGC Research Director, discussed Mirrors and Cameos in an article titled “Understanding the NGC Grading Label and its Use of Supplemental Designations.”

Lange noted that for Morgan Dollars, the designations ‘PL’ (prooflike) and ‘DPL’ (deep prooflike) “indicate only the degree of reflectivity evident in a coin’s fields and make no implication as to other qualities associated with proof coins, such as frosted devices and superior sharpness.” Lange added that NGC’s “DPL” is equivalent to PCGS’s “DMPL.”

Concerning Cameo and Ultra Cameo designations, Lange obverses that only the first impressions from new dies yield the desired frosty or satiny effects. While NGC’s use of Ultra Cameo has the same meaning as PCGS’s Deep Cameo, discerning those conditions might be more tricky than the average hobbyist might think. 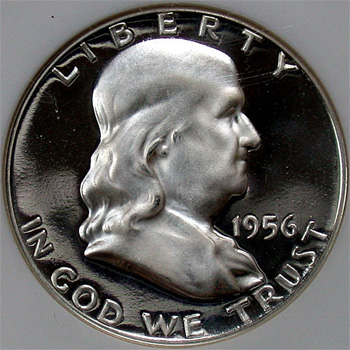 Lange writes that the “dividing line” between Cameo and Ultra Cameo “is somewhat subjective.” In such cases, we have to trust the graders seeing hundreds of coins that earn or do not earn the designations.

As with PCGS, the standard for Ultra Cameo is heavily contrasting fields and frosted devices. If one side is Ultra and another side Cameo, the coin is graded Cameo. If only an obverse has Ultra Cameo, with the reverse lacking, NGC might designate a “star” for attractive eye appeal.

Some final thoughts about Mirrors and Cameos. Both are desirable, of course, and yield premiums. Because of the Morgan dollar’s planchet size, Mirrors tend to show bag marks that can detract from a coin’s beauty even at the MS64DMPL level. But a Morgan with true Deep Mirrors has a watery as well as cartwheel effect, mesmerizing onlookers. Every collector should have at least one.

True Ultra or Deep Cameos also are eye-catching with far less noise on the fields, displaying black-white contrast that feigns high relief (raised devices). A collection of low-mint-state Franklins can cost between $6,000-$15,000 to assemble. A prooflike set of Morgans in MS62-63 can be more than $500,000, and some years–such as the 1901 Morgan–lack any examples that qualify as DMPL.