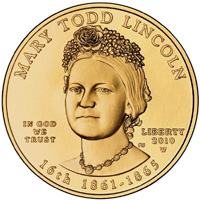 The schedule is lighter for the final month of the year, but some significant events in coins and coin collecting will take place during December 2010.

The United States Mint will begin sales for the final numismatic products of the year, which all incorporate coins or medals featuring Abraham or Mary Todd Lincoln. The latest release of the First Spouse Gold Coins series honoring Mary Todd Lincoln was released on December 2. On the same date, the accompanying bronze medal and annual bronze medal set were also made available. Near the end of the month, the American Presidency $1 Coin Cover and Presidential $1 Coin & First Spouse Medal Set including the Lincoln Dollar will be released.

The scheduled close of sales for one of this year’s commemorative coin programs will take place on December 13, 2010 at 5:00 PM. The silver dollars issued to honor American Veterans Disabled for Life have sold about 260,000 out of the 350,000 maximum authorized mintage so far. How many more will be sold in the final days?

On December 6, the US Mint was supposed to release the eagerly awaited America the Beautiful 5 ounce silver coins, however the launch of the new program has been delayed. At the current time, it is not yet known when the coins will be released or how they will be distributed.