Two of the most important, related items of early American numismatics — the document signed by George Washington and Thomas Jefferson appointing David Rittenhouse as the first Director of the United States Mint and Rittenhouse’s own superb condition 1792 half disme — will be publicly displayed together for the first time.  Both items will be featured attractions at the American Numismatic Association World’s Fair of Money (www.WorldsFairOfMoney.com) in the Chicago suburb of Rosemont, Illinois, August 13 – 17, 2013.

“This 1792 half-disme is important not only because it represents the first coinage of the United States and was directly authorized by George Washington himself, perhaps even being made from Martha’s silverware, but also due to the fact that it actually belonged to David Rittenhouse, the first Director of the United States Mint.  That means that this particular coin was held by Thomas Jefferson, David Rittenhouse and perhaps even George Washington – what an amazing provenance!” said Doug Mudd, Curator of the ANA’s Edward C. Rochette Money Museum.

The Rittenhouse half disme and appointment document are being loaned to the ANA for the exhibit by an anonymous collector who also is loaning one of the two known 1921 Roman Finish proof Saint-Gaudens Double Eagles for the Museum Showcase.  He’s also providing for the exhibit a silver candlestick formerly owned by Martha Washington.

“It’s a piece of George and Martha’s silverware that didn’t get melted to produce the half dismes,” joked the anonymous collector in a reference to the theories that the Washingtons personally provided silverware for the metal to strike the first coins authorized by the President in July 1792.

After their display at the ANA convention, the collector will take the Rittenhouse 1792 half disme and presidential appointment document to Virginia in preparation for a planned exhibit next year at George Washington’s Mount Vernon.

Slightly smaller than a modern dime and weighing less than one-23rd of an ounce (20.8 grains), the half disme (an early spelling of the word dime) was struck in the basement of a Philadelphia saw-maker’s shop in July 1792.  The nearby Mint was not yet operational. The silver half dismes were the first coins authorized by President Washington under the Mint Act of 1792.

The obverse depicts the portrait of a symbolic female representation of Liberty, the legend, LIB. (liberty) PAR. (parent) OF SCIENCE & INDUSTRY, and the year, 1792.  The reverse has the denomination, HALF DISME, and the words, UNI (united) STATES OF AMERICA surrounding an eagle. 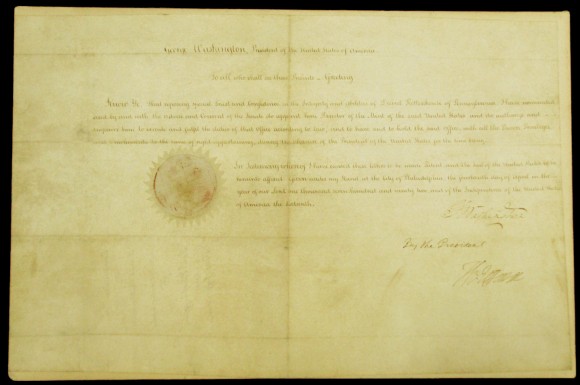 George Washington, President of the United States of America

To all who shall see these Presents — Greeting

Know Ye, That reposing special Trust and Confidence in the Integrity and Abilities of David Rittenhouse of Pennsylvania, I have nominated and by and with Advice and Consent of the Senate do appoint him Director of the Mint of the said United States, and do authorize and empower him to execute and fulfill the duties of that Office according to law, and to have and to hold the said Office with all the Powers, Privileges, and emoluments to the same of right appertaining during the pleasure of the President of the United States for the time being.

In Testimony whereof I have caused these letters to be made Patent, and the Seal of the United States to be hereunto affixed.  Given under my Hand, at the City of Philadelphia, the fourteenth day of April in the year of our Lord one thousand seven hundred and ninety two, and of the Independence of the United States of America the Sixteenth.

The Chicago ANA convention will be the first public appearance in the Midwest of the 1921 Roman Finish proof Saint-Gaudens Double Eagle.

The existence of any 1921-dated proof Double Eagle was not known until 2000 when a coin formerly belonging to Raymond T. Baker was authenticated.  Baker was Mint Director in 1921.  A second proof example in much better condition was discovered in 2006 and was displayed that year at the Boston ANA World’s Fair of Money.  It now will be exhibited at the ANA Chicago convention. 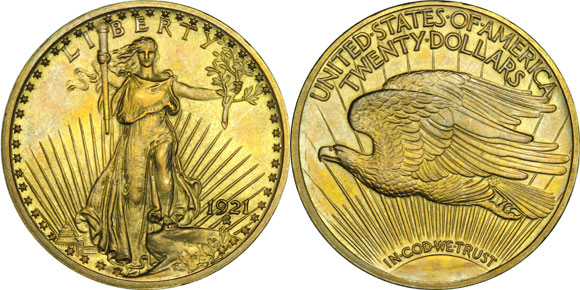 The 1921 Roman Finish proof Saint-Gaudens Double Eagle, obverse & reverse, and a photo of the obverse in the NGC holder. Photos courtesy of anonymous collector who owns the coin.

“I knew instantly it was a proof the first time I saw it,” stated John Albanese, CAC Founder who said he offered more than a million dollars for it the first time he saw it before it was certified by NGC.

“Since 1978 I’ve viewed several hundred thousand Mint State Saints and perhaps a hundred proofs.  This one doesn’t look like any of the Mint State coins, but does have the look, ‘texture and fabric’ just like the proofs I’ve seen.  This was a no brainer,” he explained.

Numismatic Guaranty Corporation Chairman Mark Salzberg stated: “The 1921 proof ranks highly among the truly important recent numismatic discoveries. For the $20 Saint-Gaudens series, in particular, it is earth shattering to encounter a coin like this for the first time outside of a museum or marquis collection. This is world-class numismatic treasure and everyone should take a few minutes to see it for themselves in its NGC holder.”

For additional information about the ANA World’s Fair of Money at the Donald E. Stephens Convention Center in Rosemont, Illinois, August 13 – 17, visit online at www.WorldsFairOfMoney.com.