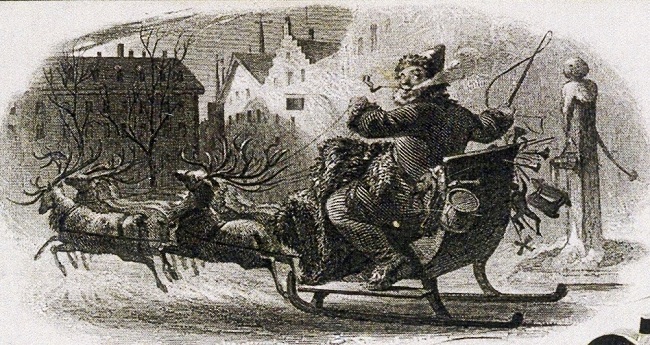 With Christmas only a few weeks away, retail stores are already filling with red-and-green–themed candies, wrapping paper, ornaments, and special gifts for eager shoppers. Classic songs liked “Rudolph the Red-Nosed Reindeer” and “Silver Bells” will be piped through Muzak and home radios. My mom will already be tearing up to the song “The Christmas Shoes,” and I already have the house decorated and all the presents wrapped. I always wait until after the Thanksgiving holiday has come and gone before jumping into the Christmas spirit…but just barely!

A Santa Claus vignette found on many bank notes of the New England states.

And as people begin their shopping for whichever holiday they may celebrate during the winter season, I wonder if the snowflakes and bells affect the numismatic market, too? For example, do the ever-popular “Santa Claus Notes” of obsolete paper money get special attention at this time of year?

The Pittsfield Bank bears this vignette of Santa at the center. Image courtesy of Heritage Auctions (HA.com).

The obsolete bank notes bearing vignettes of Santa Claus are a collectible specialty all their own. Some people collect by state or town, others by theme, and the Santa notes are no exception. Santa first appeared on bank notes in the mid-1800s, when Christmas was “declared an official holiday in many northern states . . . and some banks celebrated by creating Santa Claus currency.” In fact the growth of St. Nick’s popularity was seen through much of the 1800s: in 1823 Clement Clarke Moore wrote “A Visit from St. Nicholas” (known more commonly today as “The Night Before Christmas”). In 1870 the poem, initially written for Moore’s children, was published with a painting of St. Nicholas by Thomas Nast.

The notes quickly became keepsakes for those who carried them, and their popularity continues today. Roger Durand, in his Interesting Notes series, dedicates an entire volume to “About Christmas” (1993), where he declares that “It has been said that the value of all obsolete bank notes of the same rarity should be the same . . . except for Santa Claus notes. They are in a class of their own.” Sadly most of these notes are extremely rare, only adding to their coveted status. Heritage Auctions reports that in 2011 a Santa Claus note in circulated condition sold for more than $40,000! In the obsolete paper money world, that is enormous.