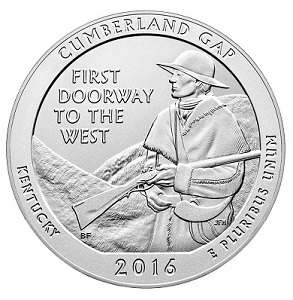 Sales of the 2016 Cumberland Gap 5 oz. Silver bullion coin have now reached 75,000 pieces for a total of 375,000 ounces. The issue has the fifth-highest mintage of all coins in the America the Beautiful 5 oz. series.

The Cumberland Gap 5 oz. coins were awarded an overall mintage limit of 150,000 pieces across bullion and Uncirculated strikes. As noted previously, the Mint has put the limit for the Uncirculated version of the Cumberland Gap 5 oz. coin at 30,000 pieces, meaning the bullion issue will be limited to 120,000 to keep the total within the 150,000-piece limit. If the Mint does decide to sell more than 120,000 bullion pieces, it reserves the right to transfer coins over from the Uncirculated allocation, as long as the total for both issues does not exceed 150,000.

Sales of the Uncirculated version of this coin now stand at 15,685 pieces; the current total across both issues comes to 90,685, so the Mint has a lot of room for more sales before it draws close to the listed limit. The previous bullion issue in this series featured Shawnee National Forest and topped out at 105,000 units sold.