The Office of the Treasury of Alderney have issued three new crown coins which mark the 300th anniversary of the accession of and coronation of HM King George I, first ruler of the Hanoverian dynasty of Great Britain and direct ancestor of the current British monarch, Queen Elizabeth II. 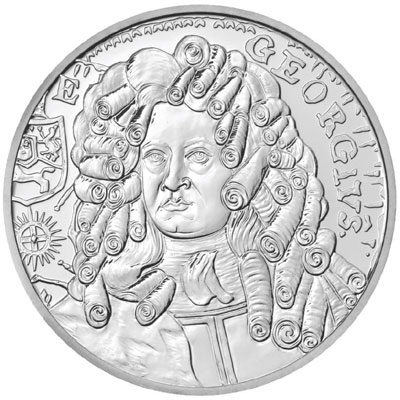 Unlike the national celebrations held for the coronations of other monarchs, King George’s coronation was conducted in an understated manner due to the political unease abounding at the time. The death of Queen Anne on the 1st August 1714 had left the country without a direct heir, her closest blood relative being James Stuart, son of the overthrown King James II, but since he as well as his deposed father were Catholic, the Act of Settlement passed in 1701 negated accession by any person of the Roman Catholic faith in order to ensure a Protestant ruler. It had been expected that Anne would be succeeded by Sophia Dorothea, Electress of Hanover, the daughter of Elizabeth Stuart and a granddaughter of King James I. She, however, had died just two months earlier, and her eldest son George, Elector of Hanover, inherited the throne instead. As King George, (later referred to as King George I after the accession of his son as George II) he brought the Stuart dynasty to a close as the Hanoverian era began. King George’s coronation ceremony was held at Westminster Abbey on 20 October 1714, and much of it had to be conducted in Latin, as the German-speaking George spoke very little English and his ministers spoke very little German. George I died at the age of 67 and after a reign of 13 years. He was succeeded by his son who reigned for another 33 years.

During King George’s reign, the UK gained a greater reputation for its circulation coins, notably due to the fact that for nearly the whole of the King’s reign, Sir Isaac Newton was Master of The Royal Mint. Known as the ‘great mind’ who had a passion for maintaining and further improving The Royal Mint’s reputation for integrity and accuracy, his enormous stature as a scientist raised the profile of The Mint. His concern for accuracy ensured that the coins of George I could be considered the best made coins in the world. It was a consequence of a famous report by Newton that in 1717 the value of the guinea at last became fixed at the familiar figure of 21 shillings. The following year the gold coinage was extended by a new coin, the quarter-guinea, which was intended to relieve a worsening shortage in the circulation of silver coins. It was intended as a convenient denomination and a substitute for the five shilling silver crown, and had a value set at 5s 3d (five shillings and three pence). However, fewer than 40,000 of the coins were struck in 1718 since the coin received an unenthusiastic welcome and no more were struck throughout George’s reign. Minting of the coin resumed in 1762. The quarter-guinea bore John Croker’s portrait of King George I on its obverse, while the reverse was decorated with a cruciform arrangement of the Royal Arms device. During King George’s reign, the Royal Mint continued the practice of encouraging people to bring gold and silver bullion to the Mint for coining by placing special provenance marks on the coins to indicate the source of the bullion from which they were made. Thus when the infamous South Sea Company chose to deposit some silver bullion, the resulting coins of 1723 included the letters SSC on the reverse. 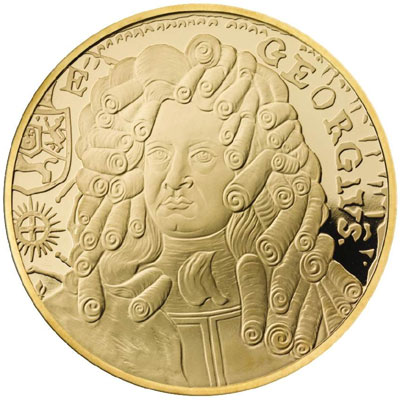 The new coins, which were designed by Royal Mint artist & engraver Emma Noblem, all share a common design. The reverse depiction includes an interpreted image of the new king complete with ‘periwig’ that featured so prominently in almost every portrait of King George I. Elements of the quarter-guinea also feature in the design as well as the name “GEORGIUS” and references of the Royal Arms of the time. The obverse includes the current portrait of HM Queen Elizabeth II as created by Ian Rank-Broadley and in use on many circulation and commemorative coins since 1998.

Both the gold and silver coins are encapsulated and are available in custom presentation boxes with very limited mintages. The Cupro-nickel BU version is packaged in a colorful sealed folder.

For more information on the Alderney 2014 King George I Coronation Coins or to place an order, please visit this page on the Royal Mint website. Information offered in English – international orders dispatched.