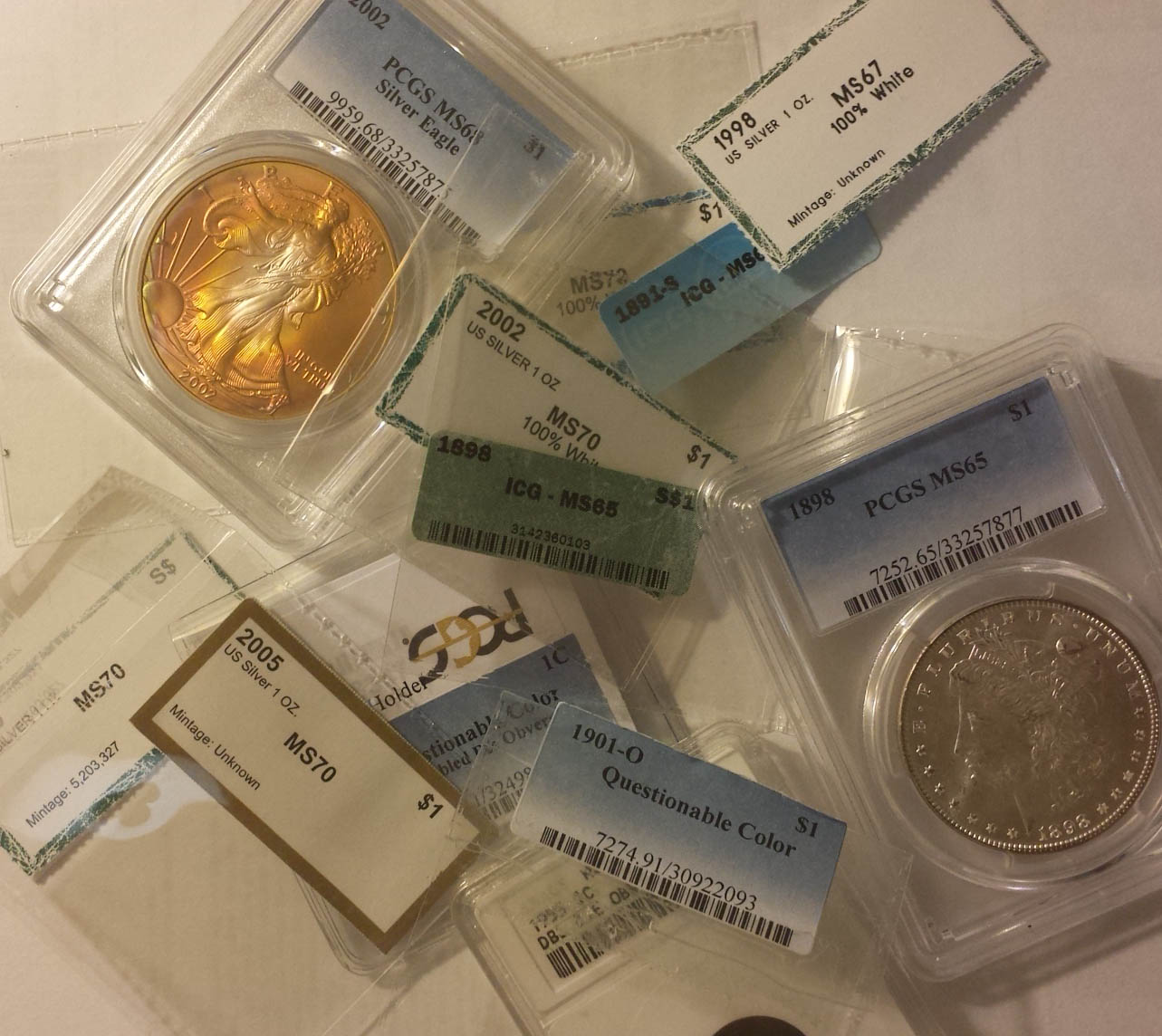 Several Coin Update viewers have messaged me to do another crossover column, which typically ranks among the most popular because we all are tempted to do it, risking big losses or making awesome gains.

In the past few months I have experienced both.

(Note: Crossover columns feature PCGS because NGC no longer considers them except for coins in PCGS holders. Click here for more information on that.)

Crossing over coins is an efficient way to upgrade collections. You can pay retail for PCGS and NGC coins, or you can cross over coins in lesser holders, potentially saving big bucks.

But there are steep risks, too. So we’ll start with my losses. 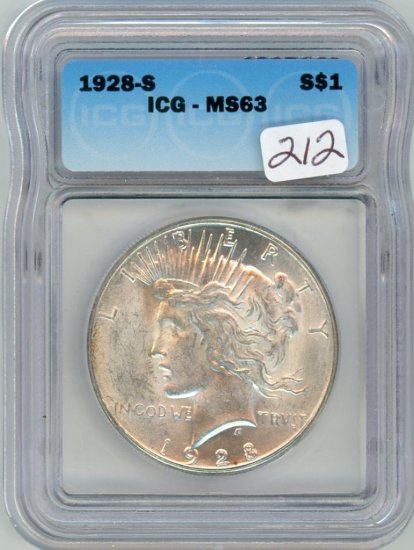 I was somewhat worried about the noise in the left field between “In God We” and the “L” of Liberty. But the cheek looked clean, so I thought this might cross over. I needed the coin for my Peace registry set. My current 1928-S is MS 62. An MS 63 is valued at $575, so this would be an upgrade at a discount of about $225 (after PCGS fees).

Submissions to PCGS allow you to mark “ANY” or  “CROSSOVER.” I could have listed the coin as “CROSSOVER,” thus retaining MS 63 in its original holder if the coin did not pass muster. That would mean I could sell it for about the price I paid. But I almost always do “ANY” because over the years that has proved the best result, with some coins even grading higher than in their original holders. I also choose this option in part because of my grading ability and PCGS consistency, trusting the process.

Consistency is key in the crossover game. PCGS and NGC earned their reputations not because they are harsh graders but consistent ones based on high standards. ANACS and ICG are less consistent. PCI and others not only are inconsistent; they often overlook flaws like cleaning, questionable color, altered surface and environmental damage.

I won this 1883-CC coin in a Fox Valley Coin auction, paying $271.40. PCI is woefully inconsistent, despite its reputation of occasionally getting the grade right. Even dealers try to sell these coins near retail. But as noted in previous columns, the PCI labels can trigger spectacular toning. This one had all the earmarks of an MS 62 cross on a Carson City coin. Put such a rainbowed Morgan in a Heritage or GreatCollections auction, and game on! You can earn hundreds of dollars. 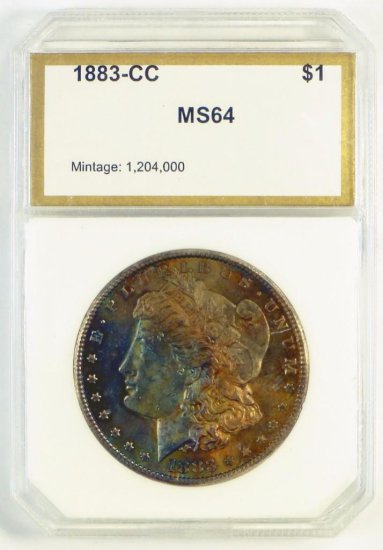 PCGS sent the coin back to me because of questionable color. This happens. You can resubmit, and you might get a grade. In this case, I decided to sell it on eBay and got back my original investment.

Another PCI coin also failed to cross. I won this one on Proxibid for $125: 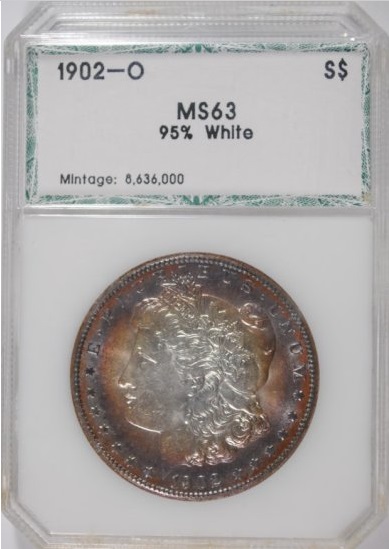 When I won this coin online, I thought this had an excellent chance of crossing over, primarily because of the designation on the label “95% White.” The coin is obviously toned over 80% of its surface, so the toning, once again, had to have happened after holdering. But when I inspected the coin, I was less enthusiastic. It looked like a cleaned coin that had retoned in the holder.

This is what I mean about the inconsistency of PCI with green and yellow/gold labels. You just cannot trust the grade on the label, and if you buy online as I do, you take the added risk of not being able to inspect the lot in person. (I never would have bid on this coin if I saw it on site.)

As predicted, the coin came back “cleaned” from PCGS.

But I also have had spectacular successes. First, these coins were in PCI holders and toned magnificently: 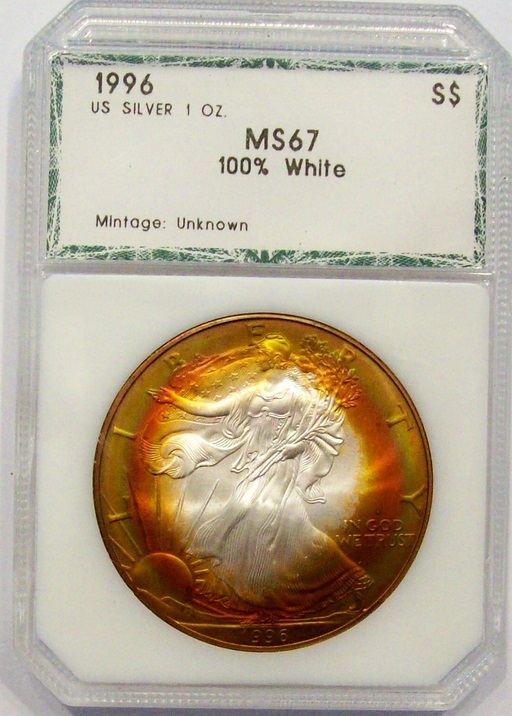 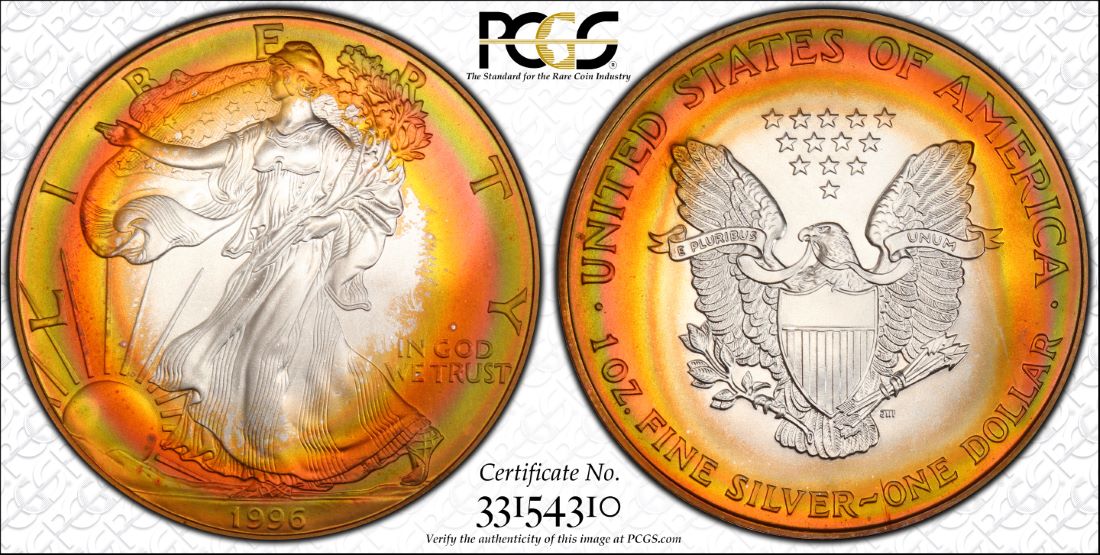 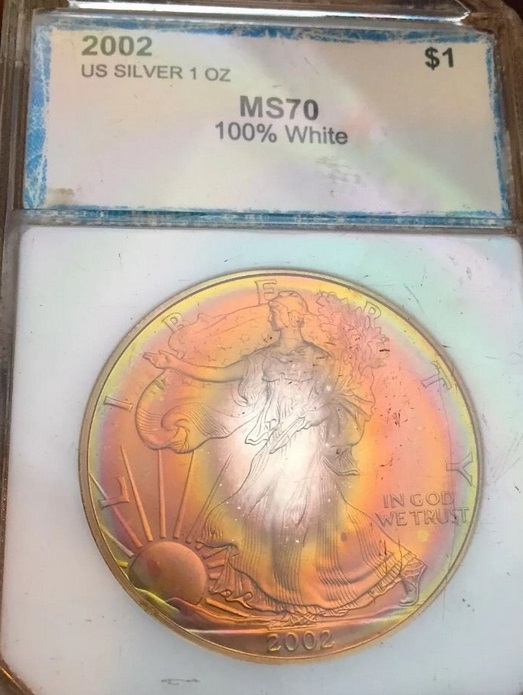 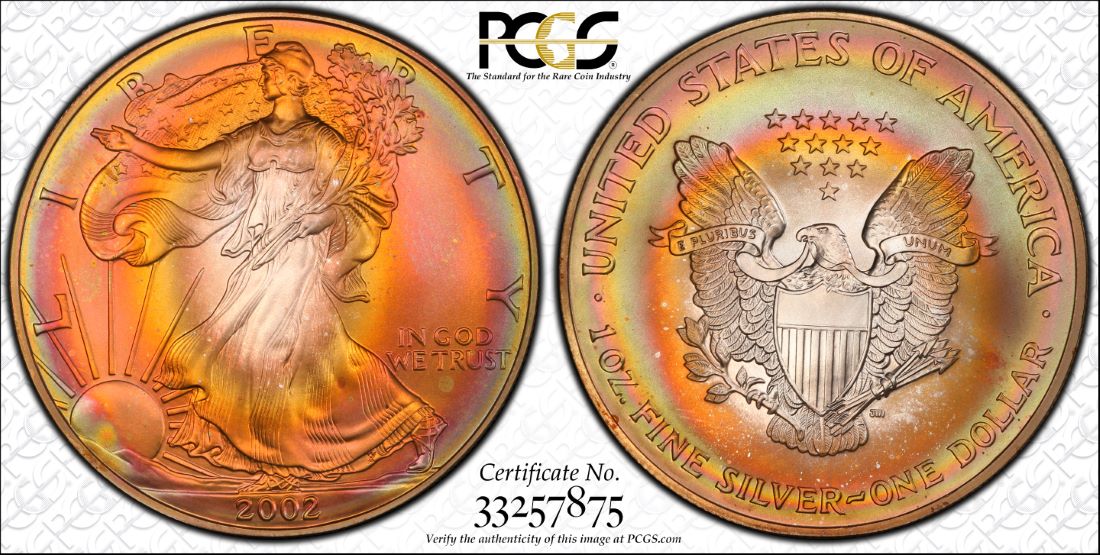 These were added to my PCGS online showcase.

I also had luck with ICG and ANACS coins. 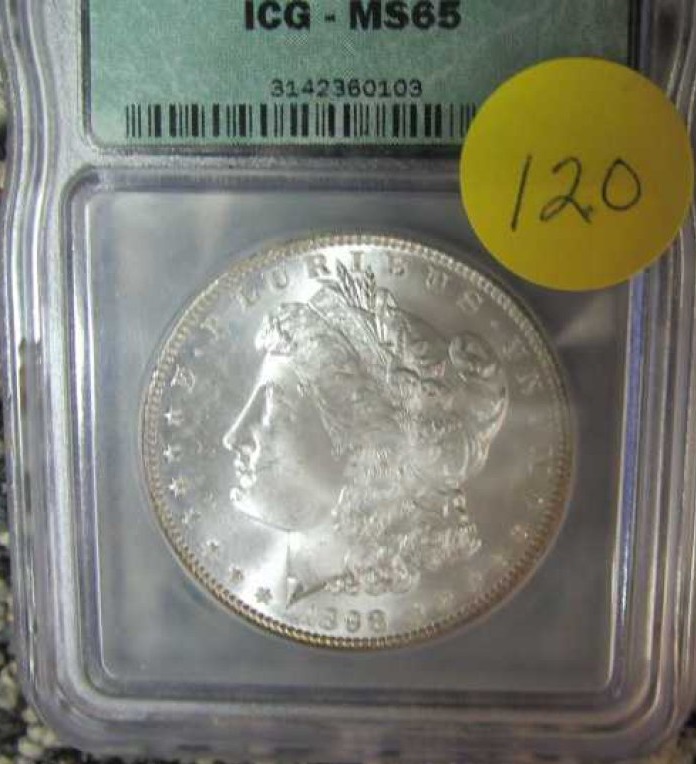 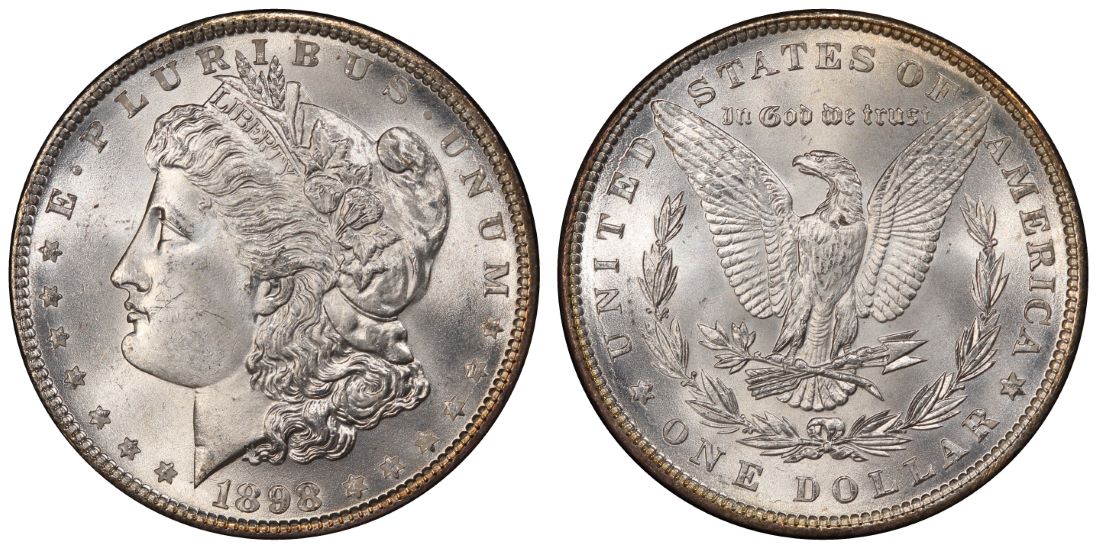 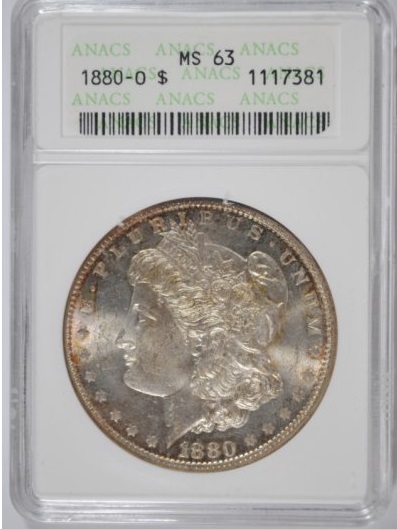 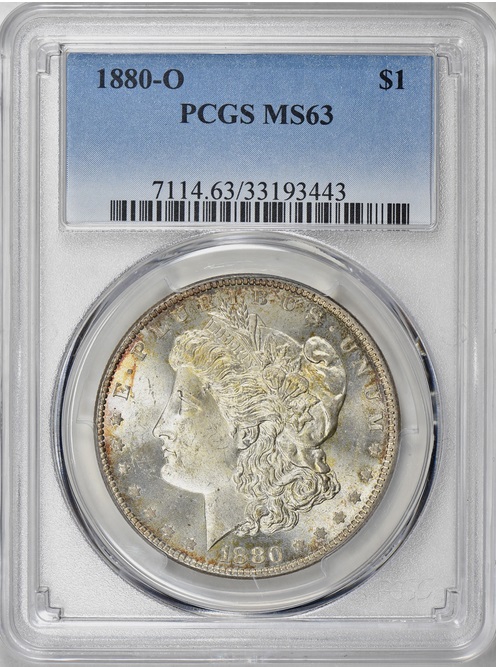 Some final tips if you are planning to go “all in,” as I do, in the crossover game: