WARNING: Cracking out coins (removing them from sealed third party grading holders) can be dangerous, both to you and/or your coins. Michael Bugeja and Coin Update News take no responsibility whatsoever for any damage to yourself, others, your property, possessions or coins should you attempt to break open a holder to retrieve a coin. This column merely describes how Bugeja cracks out his own coins and the precautions he takes when doing so. Readers in the comment section may describe how they crack open coins from holders, and Bugeja and Coin Update take no responsibility whatsoever if you choose to follow that advice or Bugeja’s replies to comments. If you have never cracked open a holder, we advise you to visit a local dealer or numismatist for guidance or ask him or her to perform the task for you. 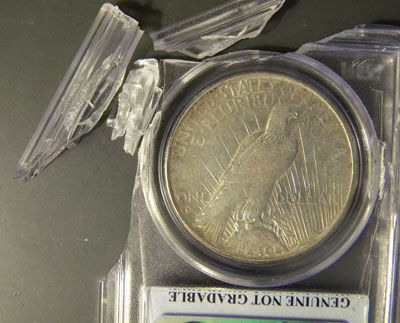 If you’re wondering why such a strong disclaimer is posted with this column, you probably have never cracked open a third party coin grading holder before. So many things can go wrong. Shards of plastic can fly across rooms or in your eyes or at another person or pet in the room. A screwdriver used to pry open holders can scrape and ruin a coin. You can pick up a coin the wrong way without wearing white cotton gloves and/or breathe on it, devaluing your possession.

These are but a few outcomes of cracking open a coin from its holder. I’m sure readers will share their bust-out stories in the comment section. To make matters worse, there are myriad ways to do the deed–some more reliable than others. 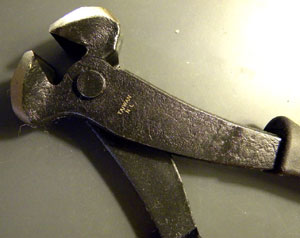 Many dealers use end-cutting pliers as pictured here with diagonal heads made of nickel chromium steel with comfortable grips to reduce hand fatigue. A person needs to apply lots of pressure to crack open certain holders. NGC holders can be tricky and seemingly unbreakable unless you employ a trick to loosen the seams. PCGS holders seem programmed with a flight pattern aiming at your eyes. ICG and ANACS holders fall in between those two polarities.

Holders from bottom-tier companies often open more easily than those from the top grading firms.

Some numismatists do not use end-cutting pliers because of hand fatigue. I eventually fell into that category and now use a tap hammer and jeweler’s screwdrivers increasing in size to a normal slotted type.

I have busted out dozens of coins using both methods. Before I begin, I make sure that I have a clean flat work space and allow no one in the room without protective goggles. I wear them, too. I also put on my work space a soft fabric cloth and wear white cotton gloves to extract the coin. I have within reach a 2-1/2 by 2-1/2 Polyethylene double pocket coin flips. Because I crack out coins for resubmission to the same or other grading company, I prepare labels in advance with proper numbers for the particular company.

When I used pliers, I also needed a hand towel to put over the holder as I cracked it, reducing the number of flying shards.

No matter the method, I find it convenient to wait until I have at least three holders to bust open before starting the process.

1. I twist the holder in clockwise, counterclockwise motions, with one hand at the top and the other at the bottom. This loosens seams, especially in those thick NGC slabs.

2. I position the pliers at a top corner of the holder by the label, farthest from the coin.

3. I put the hand towel over the holder and pliers and grip, grip, grip.

4. Usually I have to go through #2 and #3 above three or four times, each one coming closer to the coin, before the seams give way enough for me to pull apart the holder as gently as possible, again under the protective towel. (NOTE: At this point on occasion I also used a jeweler’s slotted screwdriver to help pry open the holder, keeping the blade as far away from the coin as possible.)

5. Once the holder is opened, the coin usually remains in the slab’s washer. I carefully place the coin still in its washer on a space farthest away from the cracked plastic on the cloth. Then I clean every bit of plastic from the work place and save the label for future reference because I plan to resubmit the coin to the same or different grading company.

6. I take a deep breath and then do not breathe near the coin, gently squeezing the lower pocket of the flip until it opens.

7. I place the coin in its washer above the open lower pocket and use a gloved finger to free the coin from its washer, tilting the flip until the coin slides into the lower pocket.

1. To loosen the seams, I twist the holder in clockwise, counterclockwise motions, with one hand at the top and the other at the bottom.

2. I place a tiny jeweler’s screwdriver with a slotted blade on a seam of the holder by the label, farthest from the coin.

3. Using the hammer I gently tap the screwdriver into the seam, being careful to use just enough force break the seam so that the head of the screwdriver pierces the plastic.

Then I follow steps 5-7 as outlined above in the Pliers Method.

With the coin in the flip, I adhere the label and go to my next break-out holder, following the same process.

So far using both methods I have not damaged any coin, possession or myself because I put safety above speed in removing coins, preserving their worth.