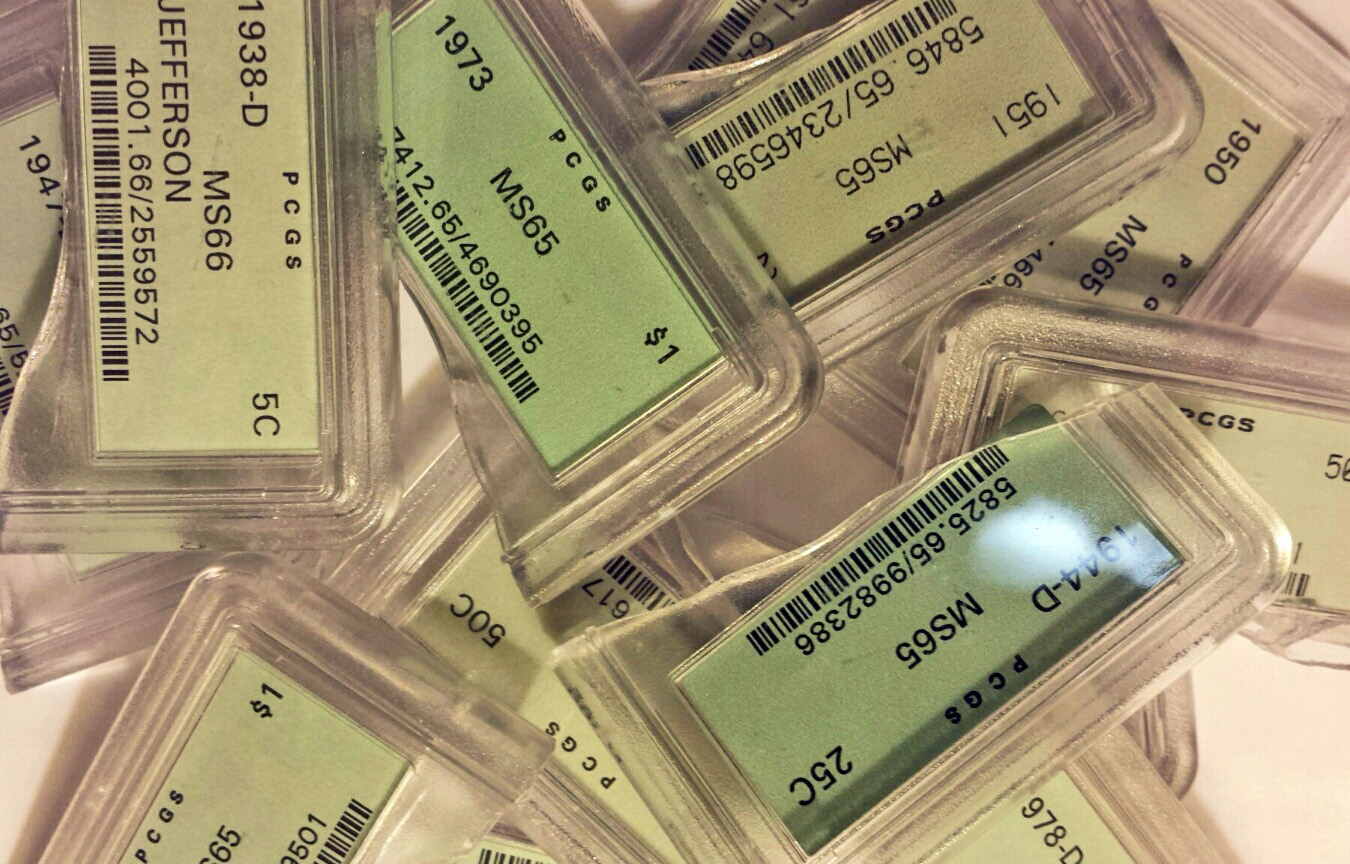 Recently in an estate auction I won more than 50 lots of coins in older green PCGS holders, which traditionally have the allure of being conservatively graded and deserving of upgrades.

For several years now I have been submitting my own coins to the top holdering companies, paying an annual fee for that privilege to PCGS and NGC. (ANACS and ICG do not charge fees; but I seldom submit to them because I have set registries in the other two top companies.)

Only rarely do older numismatic estates come up for auction, and when they do by the major houses such as Heritage, bidding typically will be intense. However, once or twice a year such an estate will be handled by smaller, regional companies where great buys can be had on Proxibid or other Internet portals.

In September 2015, Powell Auction and Realty, Knoxville, Tenn., ran a series of on-site and online auctions offering a huge collection of coins in early generation PCGS green holders. I won dozens of lots. After inspecting them, I chose the best to resubmit to PCGS for upgrades.

Before proceeding, a few disclaimers:

Cracking out a coin from its holder is risky business, even for experienced numismatists. Each has his or her preferred method, and we do not recommend your trying any method because of the potential of seriously damaging your coin or injuring yourself from shards of plastic that fly like shrapnel when done improperly.

Also, because cracked-out holders contain labels with certification numbers, those labels should be returned to the company so that their files are up-to-date and accurate. (PCGS and NGC pay 50 cents per label.)

I learned how to crack out coins from my local dealer, Scott Nichols, owner of Chester’s Coins and Gifts in Ames, Iowa. Before learning the skill, I used to bring those coins to Scott for him to crack out and submit for me for a modest fee.

While we do not recommend that novices crack out coins, aspiring numismatists might opt to work with experts to master the skill, as it provides several submission options detailed in this article. After reading it, you can determine on your own whether to learn how to crack out coins and from whom, accepting the risks.

You can purchase several handy instruction guides to get you started, including Whitman Publishing’s Official ANA Grading Standards for United States Coins – 7th Edition, featuring a spiral binding for easy access and high-resolution photographs for each series.

Also, not all old green holders, abbreviated OGH, (or NGC “fatty” and/or “soap dish” ones) are worthy of re-submission. Over the years, many of the conservatively graded older holders have already been sent by others for upgrades. An argument can also be made that the top companies in early years were not as consistent as they are today, which I believe.

Nonetheless, when an estate comes on the block featuring hundreds of old holders that typically have been in a bank box for decades, the game is on. This was the case with the Powell auctions, and I bid high enough to win several dozen lots.

After receiving the lots, I inspected each coin and decided which to submit for upgrades. Despite the allure of green holders, they are not as air-tight and sophisticated as contemporary ones. In other words, some of my Wheat and Memorial cents marked “red” had developed spots or loss of luster. Those were set aside for resale or inclusion in my collection kept in my local bank box.

Of the 50-plus lots, I selected 29 that appeared to have a shot at an upgrade.

At this point, the question becomes whether to crack out those coins, thus losing the “old green holder” premium, or submit them in those holders for reconsideration, potentially preserving the OGH premium. PCGS offers a reconsideration service in which submitters can choose an upgrade of one full point on the Sheldon (0-70) scale, a “plus” rather than full point upgrade, a suffix addition such as DMPL “deep mirror prooflike,” or any upgrade whatsoever.

In deciding which coins to send for reconsideration and which to crack out, you should refer to Whitman Publishing’s Official Red Book values to see the potential upgrade value (ed. note: The Deluxe Edition includes higher Mint State grades). You can also check PCGS CoinFacts, which also provides “plus+” values. (Rarely will a coin upgrade more than a point, although that happens.) If the potential upgrade is significant, more than $100, say, it might be better to keep the coin in the older holder and retain the potential premium, even if the coin fails to upgrade.

If there is a chip or other defect in the holder, that in itself qualifies the coin for a crack-out.

Also, more modern coins from the 1950s to the present day are good candidates for crack-outs. My theory is graders in the late 1980s and early 1990s had not yet mastered the skill of appraising those coins. Also, some suffix designations like full-torch (FT/NGC) or full-bands (FB/PCGS) on Roosevelt dimes, for example, did not appear on labels until the early 2000s. Such designations can add considerable value to a coin.

Here are coins cracked out and resubmitted to PCGS along with the results:

Although 8 of 14 coins upgraded, and two by 1½ points, it can be argued that the cost of submission was not worth the increase in value. What’s missing is the potential of another ½ point that would have upped the value by hundreds. For example, according to the PCGS Price Guide, a 1972-D increases in value from $120 at MS66 to $1000 at MS66+!

The reconsideration batch of 15 coins featured one such stellar coin. Here are the results, all Wheat and Memorial Cents:

Here is a photo of the coin from the Powell auction, won with a bid of $22: 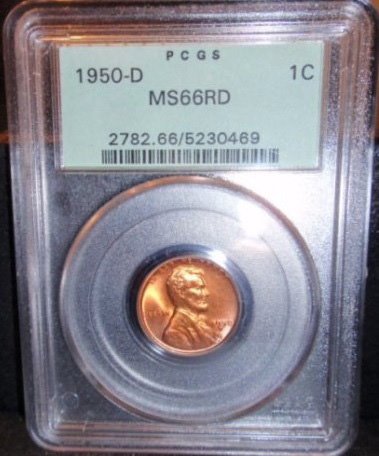 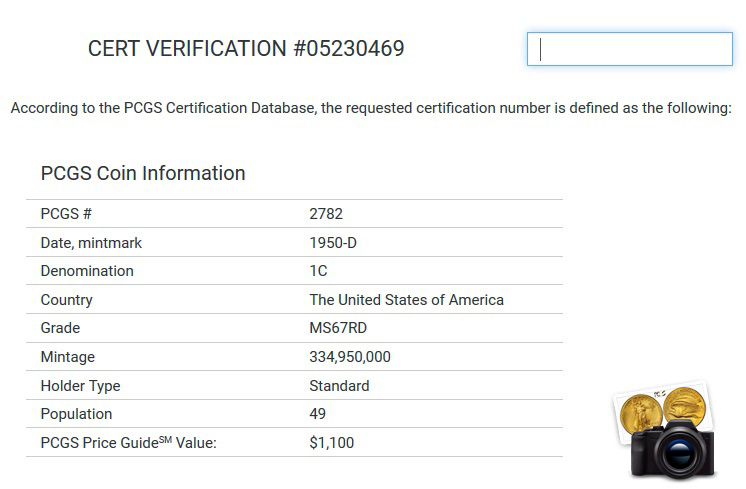 According to PCGS CoinFacts, there are only 49 examples of 1950-D Wheat Lincoln Cents grading at MS-67. “Anything higher than MS-67 condition is a true scarcity,” with MS-67+ the top grade.

Rest assured, it has taken me years of study and bidding to secure a win of this nature. I also had mentors like Scott Nichols of Chester’s Coins and Gifts, in addition to a library of grading manuals, including The Official Red Book.

The pay-off is not in the investment, but in the skill sets.

Finally, the story doesn’t end with crack-outs and reconsideration. It ends with my keeping a few of the upgraded coins for my collection at the local bank and putting the rest in auction at Great Collections, recouping funds for the next big estate sale.